Back in February I commented on a BBC programme about the ecological system of Yellowstone National Park, and how it had benefited after the re-introduction of wolves. I concluded firstly that the beautiful balance of such systems poses yet another layer of complexity and teleology for evolution to explain, and secondly that for TEs to pick and choose which bits of nature God governs is untenable.

Well, recently I saw another film about Yellowstone with some more fascinating lessons. 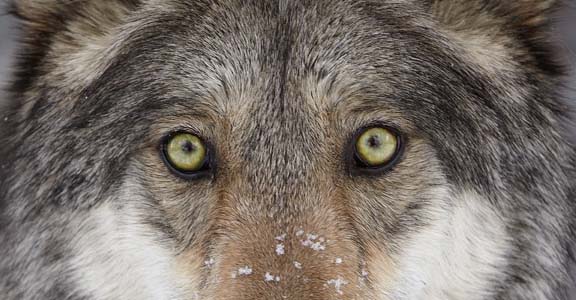 This one was about the establishment of the park, and the very different ideas of “nature” that had governed its role in American life since. I’ll do a whistle-stop tour.

I think the original concept of “wilderness” at the time of Yellowstone’s discovery by white men was primarily that of “uselessness”, with a smattering of “evil”. I venture to suggest this was related to the concept in both religious and secular thinking of the time that nature was fallen and evil. I’ll have more to say on that at the end (and a chapter on it, I hope, in a forthcoming book). But the (false) idea that Satan has got into the driving seat of nature was already well-established:

A few only, those we commonly term domestic animals, retain more or less of their original disposition, (through the mercy of God) love him still, and pay obedience to him. Setting these few aside, how little shadow of good, of gratitude, of benevolence, of any right temper, is now to be found in any part of the brute creation! On the contrary, what savage fierceness, what unrelenting cruelty; are invariably observed in thousands of creatures; yea, is inseparable from their natures! (John Wesley)

So, to leave the comfort of civilised landscapes was to venture not into majestic, but horrific, regions occupied by wild – in the sense of near-demonic – creatures. That understanding puts the colonisation of the wild west in a more heroic light – but also explains the frenetic destruction of bison or passenger-pigeons and the early photos of Yellowstone piled high with animal corpses. Fear and hatred are close companions.

But the next stage – that at which the railroad companies started to push Yellowstone as an exotic and wild destination – was the importation of the European Romantic idea of the sublime. We can see this in the lyricism of a Wordsworth or the landscapes of a Thomas Moran: 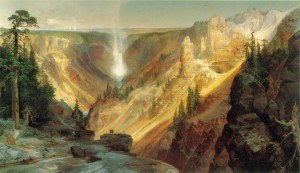 The key to the new development is not the denial of the fearfulness of nature, but its transformation into a good – the primal terror of being alone in the wilderness is an experience of God, perhaps – or more properly, of “Nature” as a god. It may be dangerous, but it’s real. You’ll see though, from the Moran painting, that integral to the Romantic ideal was the emptiness of the wild. It’s the mountains and the valleys that induce sublime feelings. The animals are just a nuisance, and any people in the landscape are destructive of its beauty, unless there only to provide an aesthetic sense of scale.

And so it was that not only did hunting continue unabated as “real men” proved their indomitable defiance of nature, but the native Americans who has occupied Yellowstone for millennia were evicted. They spoiled the whole thing.

Time, and fashions, changed and a more humane spirit began to prevail. The animals at Yellowstone began to be seen as part of the attraction. At least, some of the animals – the herbivores – perhaps seen as sharing the “original disposition” Wesley saw in domesticated creatures. Even by the scientists and rangers “conserving” the park, predators were seen as “bad” animals, and humans were needed to right nature’s wrong by shooting them – especially top predators like the wolf, which were eradicated early last century. It took a good while to realise that the good animals were becoming too numerous, requiring even more shooting, now of the herbivores too – not this time for sport, but for conservation.

This was around the time that the science of ecology began to develop, and occasional voices were to be heard advocating a different way. In particular there was Aldo Leopold, who wrote a short but influential essay called Thinking like a mountain, in 1949 (well into the secular scientific age). He describes approaching a dying wolf he had shot:

We reached the old wolf in time to watch a fierce green fire dying in her eyes. I realized then, and have known ever since, that there was something new to me in those eyes – something known only to her and to the mountain. I was young then, and full of trigger-itch; I thought that because fewer wolves meant more deer, that no wolves would mean hunters’ paradise. But after seeing the green fire die, I sensed that neither the wolf nor the mountain agreed with such a view…

In Leopold’s view, only the mountain has lived long enough to listen objectively to the howl of the wolf:

I now suspect that just as a deer herd lives in mortal fear of its wolves, so does a mountain live in mortal fear of its deer. And perhaps with better cause, for while a buck pulled down by wolves can be replaced in two or three years, a range pulled down by too many deer may fail of replacement in as many decades. So also with cows. The cowman who cleans his range of wolves does not realize that he is taking over the wolf’s job of trimming the herd to fit the range. He has not learned to think like a mountain. Hence we have dustbowls, and rivers washing the future into the sea.

Since then, as I described in my February post, wolves have been re-introduced, prey-species naturally controlled and the health and diversity of the environment, so long mismanaged by modern educated men helping nature along, greatly restored.

We could justly substitute, for Aldo Leopold’s ancient and sapient mountain, the ancient and sapient God who made it. Yet many people have not caught up with the beauty and wisdom of the systems of mutual interaction in the natural world.  But there are many scientists – even Christian ones – not to mention sophisticated theologians, who will attribute the wolf (and the internal parasite, ecologically often seen now as a top-level predator) to some malevolent, or at least blind and ignorant, force rather than to the sovereign God. The devil is still getting plenty of credit for the bulk of wild creation from all sides, evolutionists no less that Creationists.

I should add one more stage in Yellowstone’s history – one that is currently wrongfooting even the green ecologists. And that is that some people are coming to acknowledge that the beauties of Yellowstone were never the result purely of “nature”, even aided by the wolf and lion. The landscape was, in fact, largely the product of those native tribes evicted by wise white conservators of the sublime, and it has suffered as much from their absence as from that of the wolf.

The sagacity of the generic “Red Indian” has been over-romanticized, too. His supposed spiritual wisdom has become a bit of a repository for the self-indulgence of civilisation’s guilt trips (the “Dances with Bikers” scene in Hot Shots was a good antidote to this!). Yet it is notable that native Americans did not create a natural paradise by careful research projects and ideological updates every few decades, but just by living their lives in the place in some kind of respectful way. There are still too many intelligent people who see humans as a parasite on the face of the world. But the Christian view has always understood that, as God planned things, human beings ought to enhance the world, adding value rather than destroying.

And that takes us back to the “Christian” view of nature that began to corrode Yellowstone in the days when wilderness was wicked. That view, in fact, was a relatively recent perversion of both biblical doctrine and the teaching Christianity had held since early times. As I’ve argued elsewhere, it was a result of pagan influences on the Church after the Renaissance. The true Christian doctrine is remarkable for its harmony with the ecological view, and even, indeed with the rising respect for the role of humanity in maintaining and managing the natural world. See it here, as I close, in this passage from Augustine in the early fifth century, as he comments on the meaning of Genesis:

But one might ask why brute beasts inflict injury on one another, for there is no sin in them for which this could be a punishment, and they cannot acquire any virtue by such a trial. The answer, of course, is that one animal is the nourishment of another. To wish that it were otherwise would not be reasonable. For all creatures, as long as they exist, have their own measure, number, and order. Rightly considered, they are all praiseworthy, and all the changes that occur in them, even when one passes into another, are governed by a hidden plan that rules the beauty of the world and regulates each according to its kind. Although this truth may be hidden from the foolish, it is dimly grasped by the good and is as clear as day to the perfect. Indeed, this struggle for life that goes on in the lower order of creation does but admonish man for his own welfare to see how resolutely he must struggle for that spiritual and everlasting life by which he excels all brute beasts.

4 Responses to Ecology – slowly catching up with classical Christianity