Munchies with a tang

Last month I celebrated some of the wildife goings on here at the Camel’s Eyrie. Amongst them was this fine example of origami by a local band of common wasps:

I’ve kept a (not too close!) eye on their progress since, and the nest has been growing nicely because of all their hard work, getting well towards the soccer-ball size one would expect by the beginning of August.

However, it was not to be, because today when I looked, this was the scene: 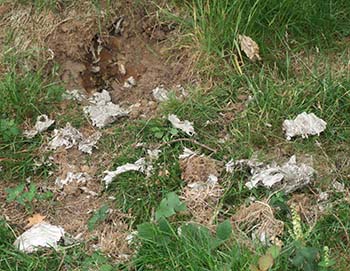 To quote an old music-hall song, “Paper, paper everywhere.” The remaining wasps were making the best of a bad job, like victims of a hurricane on the US east coast picking through their belongings for anything salvageable: 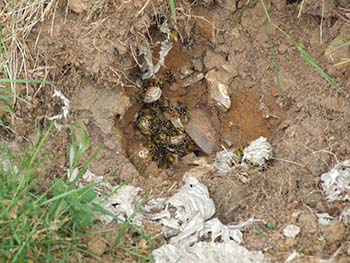 I don’t know if there are any larvae remaining, but I couldn’t see any. And it is unlikely that I would, because there is only one likely culprit: one of our friendly neighbourhood badgers. They apparently love to snack on wasp larvae, and don’t give a toss for being stung, no doubt many times, on their nose.

This, according to reports on web forums, appears to be just the time they go for the nests – it’s as if they know that the brood-size is getting up to a maximum. It’s quite a common occurrence – and no other British species would have the gall to tackle such a venomous morsel. Here’s a video I took just a week ago of one of our badgers – maybe even the same one – tucking into the spilled food below our bird feeder, at midnight.

It’s eating bird seed here rather than wasps, but you can both see, and hear, how seriously badgers take their eating.

Meanwhile I’ll be keeping an eye on whether the wasps abandon ship or, if the queen’s still there, maybe start a reconstruction effort.