Athanasius on the nature of man

Let me expand a little on the quote I gave in the last piece from Athanasius, because it seems to give some pointers, derived from Scripture, on the essential nature of Christian creation teaching. Here’s the quote:

…for, as I said before, though they were by nature subject to corruption, the grace of their union with the Word made them capable of escaping from the natural law, provided that they retained the beauty of innocence with which they were created. That is to say, the presence of the Word with them shielded them even from natural corruption, as also Wisdom says: 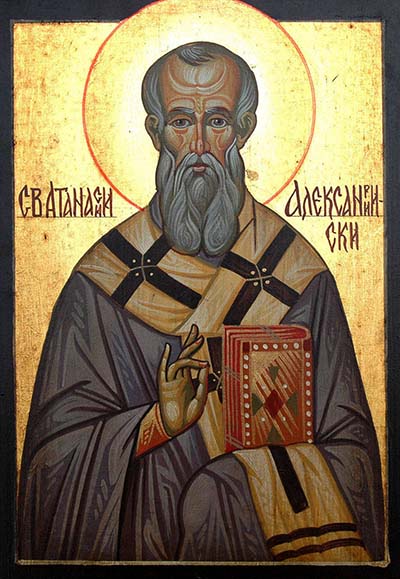 Now as I said in the previous post, it appears that Athanasius (c. 296-373), whose main achievement for Christianity was the defeat of the prevailing (and imperially sponsored) Arian heresy, had meditated deeply on John 1. The Son is the divine Logos, with the Father in the beginning (vv1-2), through whom everything that was made came into being (v3). In that pre-existing Logos was life, and that light was “the light of men” (v4). Athanasius reasons (correctly in my view) that since the prophetic announcement through John the Baptist and the coming of Jesus starts in v6, v4 refers to the role of the Logos at man’s creation – his life became, in some way, the life of humanity.

Now let’s consider another biblical concept, the image of God. Genesis 1 (of which, remember, John 1 is a christological interpretation) says (v26):

Then God said, “Let us make man in our image and in our likeness, and let them rule…”.

In Hebrew, “image” is tselem, which elswehere in the OT usually refers to the representative image of a god or king. “Likeness” is demuth, meaning similarity, usually (elsewhere) in appearance.

But the Septuagint Greek translation of Genesis 1 is a link with the Greek New Testament, and it uses the words eikon and homoiosis for “image” and “likeness”. The latter is used in James 3.9 of the sacredness of man because made in God’s likeness. The former word, though, has an additional nuance of meaning beyond “similarity”. As Vine’s Expository Dictionary puts it:

The word involves the two ideas of representation and manifestation … eikon is a derived likeness.

To give an idea of what that implies, Heb 10.1 speaks of the Law of Moses being only a shadow of the reality, not “the realities themseves” – so the NIV, but the Greek says “not the very image (eikon) of the things.”

What should give us even more pause for thought is the frequency with which the New Testament, following Genesis, refers to humans as “the image of God.” It obviously gave such pause to Athanasius, who read on in Colossians to find that:

Incidentally this is, of course, a statement of Christ’s Deity, for Isa 44.24 is insistent that God made the world alone – there was absolutely no co-creator. When the Logos, the image of God, created, then God created. But If Jesus is the “derived representative and manifestation” of the Father, and man, as created, was the “derived representative and manifestation” of God, it follows that it was the life of Christ itself that constituted the image of God in man – and that this is the implication in Gen 2:

The Lord God formed the man from the dust of the ground [as the animals had come from the earth] and breathed into his nostrils the breath of life, and the man became a living soul.

Athanasius concludes that it was this life of Christ himself – constituting the image of God – that was attenuated through sin so that it became subject to the mortality of the physical nature; and it is the life of Christ that needs to be renewed in us through his passion to restore us to eternal life.

Let’s consider what this implies for creation doctrine, though. Much ink has been spilled speculating on what constitues the “imageness” of man. Most often particular attributes like rationality, moral sense etc are considered, and not infrequently in TE circles these are attributes that have arisen through natural evolution. Hence the idea that if intelligent dolphins or elephants had arisen instead of primates, God would have dealt with them as those in his image. But the discussion so far shows that, if anything, such attributes must be seen only as the likeness of God (homoisosis), not the image.

OT scholars, among them John H Walton, have pointed out that in the cosmic temple setting of Genesis 1 and the temple-precinct imagery of Genesis 2, “image” must refer to the kind of representive of divinity found in ANE temple-worship, and/or the kind of image set up by a king in a vassal state to “be” him there (cf the image set up by Nebuchadnezzar in Daniel). In paganism the image of the god does not picture the god, nor symbolise it, nor become indwelt by divinity. Rather, through its special origin (falling from heaven helps, like that of Diana in Ephesus in Acts) and sacred consecration, it is the representation and manifestation of the deity.

This mindset, which doubtless informed Genesis, fits so well with the christological origin of man summarised by Athanasius. The tselem of God in Mankind was not to do with what powers he had, evolved or otherwise, nor even primarily with a God-man covenant of some sort, but was the divine light of Christ breathed into his essential nature, the life that itself was the image of the Father, or as Hebrews 1.3 puts it:

The Son is the radiance of God’s glory, the exact representation of his being.

The word “representation” (“image” in KJV) here is charakter, the stamp from a die that is separate from it but identical. It is the life and light of Christ that sets man apart from all else in creation, not his biology.

At the same time we must be careful not to see humanity as an animal-with-a-soul, a kind of hybrid between the biological and the divine. In Hebrew thought man is an essential unity – Adam became a soul when God breathed into the dust from which he was made. This is a very similar concept to the hyelomorphic dualism of A-T metaphysics. It is the very special spiritual human form that is united to matter that makes people. There is indeed an animality to us – and it might might even be evolved – but even if so it cannot, and must not, be separated from what is heavenly about our constitution.

The situation is analogous, though not identical, with the Incarnation itself. The Logos was not added to an ordinary man to make Christ in some kind of chimaera – there is one Christ, with two natures distinct but in perfect union (for more see the Definition of Chalcedon).This is a mystery, of which Athanasius was gloriously aware:

The Word was not hedged in by His body, nor did His presence in the body prevent His being present elsewhere as well. When He moved His body He did not cease also to direct the universe by His Mind and might. No. The marvelous truth is, that being the Word, so far from being Himself contained by anything, He actually contained all things Himself. In creation He is present everywhere, yet is distinct in being from it; ordering, directing, giving life to all, containing all, yet is He Himself the Uncontained, existing solely in His Father. As with the whole, so also is it with the part. Existing in a human body, to which He Himself gives life, He is still Source of life to all the universe, present in every part of it, yet outside the whole; and He is revealed both through the works of His body and through His activity in the world.

Likewise Christ’s life was not added to an animal to make man, a beast with an immortal soul: there was only a man, whose earthiness and Christ-likeness were a unity. Our thinking about human origins needs to reckon with that: as in Aristotelian causation (matter + form -> essence or substantial form) so in the Bible dust + breath of Christ -> Soul = Image of God.

There’s a wise saying that you don’t have a soul: you have a body – and you are a soul. And that soul – which is the totality of what we are as humans, body and spirit – is also the Image of God – which means the manifestation and representation of the being of Christ in the world, tragically marred though that now is by the Fall. In one sense, perhaps, Christ was living in the world through us even then – maybe that’s part of what it means that creation was made for him.

Now I’m not at all sure how that works out in a world of evolution. But it’s pretty clear that, in certain respects at least, the creation of man was an act of special creation – the derived manifestion of the divine Logos is not a known feature of Darwinian selection – and nor could it be even in principle. That is rather scandalous to the naturalist, obviously, but conceptually it’s also rather difficult for the Christian who believes in evolution, since what differentiates man from the beasts is not an image added to him, in some kind of Cartesian dualism, but a different kind of form from the animals’ that makes their unity of nature fundamentally different from our unity of nature.

Perhaps we should heed GD’s advice on the previous post not to speculate on how God creates, but to accept that he does. But if the “imageness” of man did indeed derive from the spiritual life of the Son of God, biology and physical anthropology are likely to be distractions to a true understanding of man’s origins.

9 Responses to Athanasius on the nature of man