I am deplatformed for hate speech

There have been some high-profile cases recently, in American, Canadian and British universities, of allegedly controversial speakers being disinvited, heckled or even assaulted in order to prevent “hate speech“. This has fed into a debate about the whole purpose of academia, and even the wider question of freedom of speech. One commentator recently reported that to those under 35, belief in freedom of speech is equated with fascism, which even if only partly true is a big deal. Being over 35, I’ve only just realised that, in a non-academic setting, I was quietly deplatformed for hate speech a couple of years ago.

I’ll explain why, but let me first link to piece of spontaneous banter I personally witnessed back in 1970, leading into a song by The Who at the famous Isle of Wight Festival that year. The relevant section is that before the song – pause at that point, or read on as you listen to a set that proves The Who were the greatest live band in the world.

You must understand that it was widely known at the festival that perhaps a majority of the half million or so who’d come to see an unparalleled line-up were Europeans, so Pete Townshend’s quip about coming home to “a load of bloody foreigners” was both accurate, and ironically funny – as the Germans sitting around me who cheered loudly proved. It was also, though, the case that French anarchists had come with the stated intention of breaking up the festival (they certainly succeeded in souring the atmosphere and demolishing the Woodstock myth of peace and love), and so there was probably a note of protest and appeal for sanity in Pete’s comment. But if he said the same now it would certainly be reported by some of the press as racist hate-speech, and I think the world would be a poorer place for pressuring artists to be seen to be bland and inoffensive.

I mention this snippet because it may have been lurking in the back of my mind when I wrote my only mildly controversial song, which was an ironic treatment of blind prejudice called They All Look the Same to Me. Its composition was interesting, because I woke up having dreamed the hookline, involving the title being sung twice with different syllables stressed, which seemed a pretty catchy idea. But then, I thought, why on earth those particular words, which are, of course, what racists proverbially say about others.

I’m intrigued that Hillary Clinton recently used a near-identical phrase ironically, and rather than being interpreted as her mocking of bigotry, she was immediately publically pilloried as “offensive and insensitive.” In my view, though I don’t like the woman, she was making a useful point off the cuff, and her detractors are not only crass, but destructive of the subtle discourse that real humans have engaged in throughout history.

And that’s what has made me understand better that what was constructive in 1970, and even when I wrote my song in 2003, has now been arbitrarily declared evil. Let me continue the tale.

The weekend after my dream, a young person desperately and unsuccessfully trying to find employment in London told me, “If I was blind or in a wheelchair I’d easily get a job.” Now that was inaccurate, nor even particularly seriously spoken, but it was not in the least malicious, arising only from her own lack of success. But it immediately suggested to me what my dreamed song should be about – a bigot refusing to give to a disability charity because he doesn’t realise his shared humanity, and even using his cliché in the wrong setting. I’d actually come across such people when collecting for a cerebral palsy charity.

In verse 2 I envisaged the same guy seeing attractive young women about their business and simply not understanding their culture – whilst regarding them as unattainable sex-objects. Any other middle-aged men out there?

Verse 3 saw him bracket so many people as non-people that the whole world looked the same – even life on other worlds would turn out to be no different. So at the end I had him retreat into himself from everything, asking us to turn out the light and wake him up if anything interesting happens. To my delight, when I told my musician brother the lyric of this verse, he said he knew a guy with exactly that attitude.

So all in all it seemed a pretty successful structured song, arguing that bigotry tends only to isolation. So that when I was asked, for a second year running, to play at a local town folk festival, I took the song along – especially as I was accompanied by two saxes, and it suited that line-up admirably. I explained in the introduction that it was a song about bigotry, and added the line, “The opinions in this song are not those of the author.” 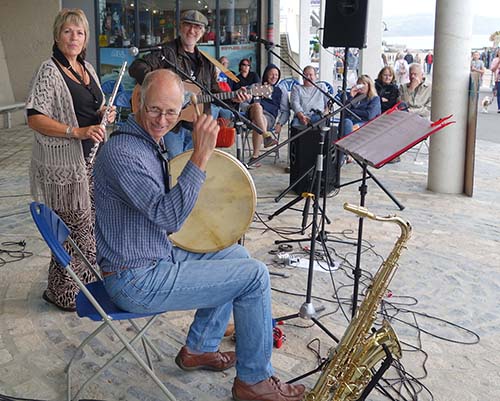 So I was surprised a day or so later to get an e-mail from the stage-manager relaying a complaint from a couple who, apparently, had been deeply offended because they have a disabled son who has faced discrimination (not present), and they had walked out during the first verse. “Such things should not be said,” they said, “even in jest.” Well, a civilised three-way correspondence followed, in which I explained my purpose in writing the song, and in which the organiser reassured the complainant what a warm and inclusive human being I really am.

But I noticed I wasn’t asked back the following year, or this year, and the Hillary Clinton thing has made me realise that were I to sing that song in public now, it wouldn’t be a complaint from a sensitive parent I received, but more likely a police investigation into hate speech following a protest from a disabled rights activist on the lookout for trigger-words. And it’s not even a university campus, but a seaside town.

We seem to be building – all too rapidly – a society in which art and discourse as the tossing round of deep issues is being replaced with a standardized, and strictly enforced, presentation of only certain matters using “certain” standard formulae. I could present a bigot in art, as long as he was wearing a swastika badge and spoke in monosyllables. And died horribly, of course.

In fact (and delightfully ironically) everybody is being pressured to think and speak identically on such things – which actually confirms the jaundiced viewpoint of the protagonist in my song. Everybody is beginning to look identical. “Turn out the light, and wake when there’s something new.”

I suppose for completeness I ought to link to the song in question, in the hope that my heinous hate crime isn’t noticed by the authorities, academic or political. It’s nothing much – not necessarily even a good song. But do not click the link if you require a safe space, or are under 35.

6 Responses to I am deplatformed for hate speech