The Lost World of Scripture 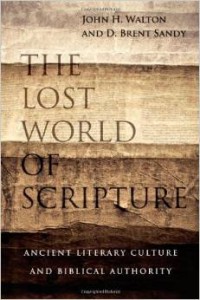 I’m beginning to feel that my reading of John H Walton’s books is in danger of resembling that of a Harry Potter fan: the next in the “Lost World” series is always a must-read. The Lost World of Scripture is actually a joint effort with NT scholar D Brent Sandy, and being from 2013 isn’t his latest work. And though it arises from Walton’s overriding concern with comparative studies in biblical understanding, its purpose is to apply such studies to the key issue of “Scriptural Inerrancy” in the light of American Evangelicalism’s recent loss of focus and confidence on this issue. It’s an important contribution.

The book is mediatorial in purpose, seeking to answer the shortcomings of the twentieth century evangelical concept, whilst seeking to maintain a more robust idea of what it really means to believe that the Bible is fully inspired by God. As such, much of the case is made to challenge simplistic and untenable notions of inerrancy amongst mainstream evangelicals. But where the authors see the greatest dangers lurking is evident between the lines – or rather, is spelt out plainly in the footnotes. Commenting on how some have robbed the term “inerrancy” of its utility by making it infinitely pliable, they remark:

This pliability was tested in the early 1980s in the discussions surrounding Robert Goundry’s interpretation of Matthew as Midrash, in the following years in the debates over open theism and most recently by Peter Enns and Kenton Sparks in their embracing the skepticism of critical scholarship.

I find this interesting coming from a scholar who is on the staff of BioLogos, an organisation that has been unusually friendly to open theism and the skeptical young bloods mentioned. It seems that the issues may be more profound and truly divisive than is often acknowledged. In their attitude to inerrancy, in its recent form, the authors acknowledge that the attempt to draw boundaries was a necessary response to the hermeneutic of disbelief in a century and a half of critical scholarship. Since this had focused on questioning the nature of God as presented in the Bible, and the truth of its historical claims, it was understandable that the evangelical response was couched in terms of factual inerrancy. Likewise, the attempt to deal with textual and source criticism by placing the focus of inspiration in the “original autograph” was a legitimate response to the nature of the challenge at the time.

But as Walton points out, there are genres of literature where the term “inerrant” is simply inappropriate. Apart from such categories as poetry, which depend on metaphor and rhetoric and are directed to feeling more than logic, he mentions that proverbs, which by their very nature are generalisations, by that same necessity are not universally applicable. Indeed, even when Proverbs 26.4 and 26.5 directly contradict each other, both proverbs are, after the manner of proverbs, true.

As might be expected from Walton’s work on Genesis, such exploration of the true nature of ancient genres is a big part of the book, and one of its most useful aspects. Exploration of how the ancients customarily “did” literature shows how they didn’t ever, as a rule, make things up. But their norms of rhetoric and language, being universal for them but alien to us, need to be recaptured in detail before we can make sweeping claims either that biblical claims are (in our modern sense) “literally true” or, on the other hand, “errors” or “myths”.

For example, we need to understand that history, “as we understand it”, is just that – a particular and heavily encultured way of handling the past. It is by no means the only, or even the best way of handling events and, more to the point, didn’t even exist in Old Testament times. And the historiography of the Hellenic-Roman NT period also differed fundamentally in its norms from ours. What was selected for inclusion in both periods was different, and was handled quite differently, from what nineteenth and twentieth century scholars insisted was the “only” scientific way to do history. The latter therefore did injustice to the biblical accounts by judging them on their own anachronistic criteria. These, of course, included a modernist belief in naturalism that cut directly against the entirely theological purpose of biblical history and therefore labelled it as “religious bias” or, worse, as “politically motivated fiction.”

Needless to say the book explores similar genre misjudgements in depth – the false dichotomy between “history” and “myth”, the role of ancient law-codes (which shows they were not legal systems in Israel any more than under Hammurabi) and so on. There’s a lot of meat there for current debates.

Most importantly, though, the “worldview re-education” on which the book majors is to help us understand the profound difference between our own post-Gutenberg literary culture, and the predominantly oral culture of both the Old and the New Testaments. This is not to go the old liberal route of denying there was literature in biblical Israel, but rather to try to wrap our minds round the radically different way in which written literature was conceived then. Its purposes were completely different from documents in our print-culture, and its construction and authority were entirely different from what we understand nowadays.

This discussion covers multiple topics of relevance to biblical inspiration, including the completely different way the ANE viewed authorship itself (and therefore authorial authority), “intellectual property”, transmission of texts before committing to writing, transmission of texts after writing (including updating and editorialising), the role in an oral culture of the community in maintaining the integrity of a text and, in the case of the Bible, in subsequently canonising it. In such thinking, the idea of “the” author, or of an original inspired autograph, begins to unravel – and that has always, in fact, been obvious when dealing with collections of writings like the psalms or proverbs, or compilations from contemporary annals like Kings, for example.

The net result is to place the locus of inspiration, for us as readers, in the final text as we have received it. Sandy points out that Paul in his famous “All Scripture is God-breathed” text referred to the Bible that Timothy would be reading, probably the Greek Septuagint, though Paul was well aware of variant texts. Indeed, as Hodge said over a century ago, the process of inspiration is not merely a question of God’s Spirit and a prophetic writer (though it includes that), but a providential oversight of everything which leads to the Bible. What Walton and Sandy add is that such providence is not diminished by the presence of composite texts, variant readings or even (as in the case of Jeremiah) alternative textual traditions.

Such considerations also do much to defuse the alleged dichotomy between the “word” as Jesus and the “word” as Scripture, as if the latter was a kind of idolatry. Correctly understood, there is a continuum between the mind of God perfectly expressed in Jesus, and the words spoken through his Spirit, which are preserved for us in the tattered translation by our bedside. Both are the word of God.

They come to this conclusion not only by a consideration of normal literary practice in ancient times, but by an examination of the recent insights of Speech Act Theory. As they adopt it, any communication consists of the locution (the actual words said or written: this includes such things as genre and so covers the field of “literalism”); the illocution (the intention of the message to command, remember events, or whatever); and the perlocution (the intended response of obedience, encouragement, etc).

Inspiration is applicable to all these areas, but in different ways. So it is true to say that the locutions of Scripture are, truthfully, God’s words, for all we have received in Scripture are words. Yet they are couched in the genres, culture, language and thought-forms of the human authors, and need to be interpreted in that light to our own circumstances.

The illocutions behind the words are the principal loci of God’s authority in the text – and that’s why, to our authors, if a text is intended to tell us about a salvific historical event, we usurp God’s authority if we deny its basic truth, albeit understood in the light of the locution. Likewise the authority of the text is diminished if we change the illocution at our own whim – for example, by undertaking a character study when that is not the purpose of the text. Most importantly, nothing is more clearly part of the illocution of inspired Scripture than its teaching on God’s own character, and so to selectively reject biblical teaching on God’s wrath (for example) is an unwarranted denial of what belief in “inspiration” must entail.

Our authors, in fact, say that in order to be responsible readers who acknowledge the inspired text, we need a triple response. We must first work at understanding the locutions in their true context, since they are God’s words; we must accept the illocutions by faith; and must obey the perlocutions as disciples. To neglect any one of these is to undermine the authority of the Bible, which is in the end that words like “inerrancy” point to.

All three of these (including our faithful response) are matters of the Holy Spirit and of faith – and so the book moves away from any idea of “inerrancy” as a matter of apologetics to persuade outsiders, instead embracing the idea that trust in Scripture as God’s word is, whilst entirely rational, a response intrinsic to the community of faith.

I like their thesis (though I’ve not mentioned my few points of disagreement) because it is informed by the best of current scholarship, yet arises, like Scripture itself, from faith, rather than from skepticism and doubt. Definitely one to read.

8 Responses to The Lost World of Scripture