Hi there. I finally got round to creating a blog, partly because a few people asked me to, but mainly because I accidentally moved my website from MS hosting to Linux hosting. It meant rewriting all the scripts on the website, but had a built in WordPress facility which it seemed a pity to waste.

I’ll no doubt have something substantive to say in due course, but here I’ll just explain the name . The hump belongs to Potiphar, my alter-ego, who has always done my writing for me. The title is, I am told, a position in the Kama Sutra but I know nothing about that sort of thing … it does convey the idea that what you think just contains water sometimes harbours real nourishment. There’s also a nice quote that a camel sees only the hump of the camel in front, not its own. Anyway, this is he: 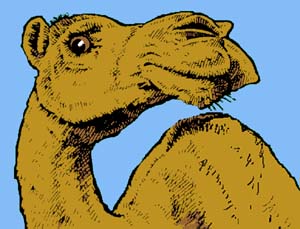