Why the zebra got his stripes

An instructive little news lollipop on the BBC radio news this morning. There was an interview with a PhD student researching the reason zebras have stripes. Her team was testing the hypothesis that herds of striped targets present a confusing target for predators. They did this by simulating such a scenario on a computer game, testing humans’ ability to zap confusing patterned targets as opposed to plain grey ones.

To their surprise, the patterns carried a slight survival disadvantage, suggesting that the zebra’s stripes are not protective against predators, but favour them. Now, of course one must factor in that lions are not people playing on a computer, but that’s just a minor issue. The fascinating thing was how the discussion led to the many other hypotheses that have been proposed, such as that the patterns deter insect predators rather than mammals. It ended with the caveat that the adaptive advantages to zebras might well be multifactorial. Which is fair enough – research is not guaranteed simple solutions, or any solutions at all.

But to me the most interesting thing was that, despite all the controversy about adaptationism in theoretical biology, the many people researching such issues in the field (according to the interviewee) all appear to be working to a paradigm that assumes zebra stripes (and other such phenomena) confer an adaptive advantage. That paradigm is also, despite methodological naturalism, entirely dependent on thoroughly teleological hypotheses. Different researchers propose different explanations of “what stripes are for”, and then do studies to show if that final cause, that purpose, is the correct one.

That shows that the Darwinian paradigm is actually about final causation, the efficient causes being sought to explain observed, or proposed, finality. The science would follow just the same pattern if the paradigm was “God designs all things for a purpose: what is his purpose for zebra stripes and how does the zebra fulfil it?”

What is notably missing from the field, as described by the BBC interviewee, is the body of research testing the proposal that zebra stripes serve no survival purpose whatsoever. In these days of neutral theory, though, that ought to be (in numerical terms) a front-runner over adaptation. Stuff in the genome just happens, and natural selection is insufficiently powerful to eliminate most of the fortuitous changes, as Eugene Koonin described. So maybe zebras just happen to be striped. In that case, the research would, one supposes, be in the molecular field, trying to uncover which genes govern stripiness and how they didn’t get selected out.

Why that is not being pursued by the majority is pretty obvious – it’s an awful lot of work in order to uncover a non-explanation. It would, in fact, be about as interesting as tagging a piece of dust and tracing the train of fortuitous efficient causation to wherever it happens to end up in a pile of identical pieces of dust. And so it’s only the significance of the result that makes the science of efficient causes worthwhile. A paradigm that doesn’t assume finality is a science stopper, because true chaos is irrational and uninteresting. If your paradigm assumed that zebra stripes just “are”, there is nothing to research.

But there’s more to be said about how this example shows that the current paradigm (in this case adaptive survival by natural selection) dictates the research program (which we’ve been looking at in other recent posts). The assumption is that stripes must be advantageous to zebras, because evolution favours fitness for survival. Even non-adaptive changes, of whatever sort, are assumed not to disadvantage zebras significantly, or they’d be subject to purifying selection. Features must have a function, or at least not an anti-function, for survival.

A lateral thinker – or a serious theistic zoologist – might decide that such a paradigm is too limiting by far, certainly in the light of the biblical doctrine of creation. He might look at the actual results of this recent research – that stripes on a zebra appear to make it somewhat more prone to predation, and call it a result. That data, rather than being dismissed as the failure of a hypothesis, might instead provoke a new hypothesis, based on the facts rather than an adaptive assumption: perhaps zebra stripes are intended to shift the ecological balance of the African grasslands more in favour of the predators, for the greater harmony of God’s total οικονομος. The Creator, after all, is concerned with the whole as much as the parts – Scripture even tells us, in so many words, that he provides the lion with his prey:

The lions roar for their prey and seek their food from God. (Ps 104.21)
“Can you stalk prey for a lioness and satisfy the young lions’ appetites as they lie in their dens or crouch in the thicket?” (Job 38:39-41)

That might seem scientifically perverse, but I don’t see why. Practically, one has simply substituted one unproveable metaphysical assumption on final causation, “animals are in a struggle for individual survival”, with another, “animals seek to serve their role in a harmonious economy”. In either case, one is perfectly free to chase up efficient causes in terms of selection, molecular changes or whatever.

There’s even another off-the-wall possibility, of course – zebras may be striped because they look better that way, and give variety and beauty to nature. Let’s imagine one allows such mere aesthetics into ones paradigm. Hypothesis: zebras are striped because they look nice. Computer simulation experiments confirm it. Molecular experiments show that there is either some plausible explanation in terms of efficient causation, or that it just happened that way. I’d agree with you if you said that such a research program would not add much to our secure knowledge of the reasons for order in nature. But if the order and purpose in nature is an epiphenomenon, as it must be in neutral theory and even in adaptive Darwinianism (if the “piless indifference” story of materialism were true), “secure knowledge” may be pretty illusory too. 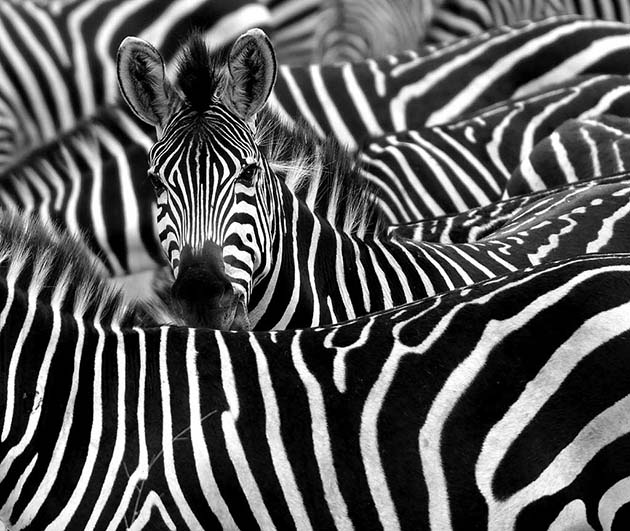 4 Responses to Why the zebra got his stripes