Sy Garte has a new piece on his blog about a Chinese paper, published in a Western journal, in which some biological function is dealt with, and its suitability to the wisdom of the Creator is remarked.

It appears the paper is not promoting any extraordinary role for the Creator in the paper, but merely treating his ultimate role as an assumption. It is no surprise that there has been a reaction (out of all proportion to the paper’s scientific importance) that the online journal, PLOS One, has abused Science™, and the investigations into failed peer review and closet-Creationism will no doubt lead to retractions and heads rolling around. It is, after all, virtually the end of civilization as we know it.

Sy, a scientist of course in the established tradition, though a believer in the Creator, agrees that such statements are out of place in science. I suggested on his site that this assumption that God may not be mentioned in science may be as much cultural imperialism as anything. God was routinely mentioned in Newton, Kepler and even Darwin’s works, which belong to the same scientific tradition. There has not, as far as I am aware, ever been a worldwide conference to change the criteria under which science must be done and published in order to be science.

Indeed, as I pointed out to Sy, there is no reason why the diverse regional traditions in science (masked by our own Western ethnocentrism that assumes all Science is done in English by liberally minded skeptics) should be bound by English or American conventions.

But I want to look here at the more general implications of objecting to the underlying assumption of a Creator in this paper. There is no scientific justification to excluding the mention of God, as such, from science. The more valid philosophical objection is that science, since early modern times, has explicitly excluded the idea of final causality from its purview.

Now, I have been made aware by the response to my last post that many people may read this without ever having thought about the different varieties of causes that really need to be considered when science meets religion, though we have often mentioned them here. This piece may be a good introduction.

The basic idea is that science can, and should, only deal with “material efficient causes”, ie which physical events lead to other physical events. A gene mutates, for example, causes a protein to alter, and so forms a new phenotype to interact with the environment. In this framework, the forwardly-acting causal steps are the only answer to the question “Why”, the ultimate cause (in this example) being, “because there was a mutation).

Final causation, however, is about the aims or goals to which things tend. So, to use the “Creator” instance, the “Why” of the causal sequance above, in the sense of “final causation”, would be, “because God wanted to make the organism more useful, beautiful or efficient”. Though, in fact, those reasons could be multiplied, to include such things as limiting its population, being useful to man, hastening the return of Christ, or any other mysteries in the mind of God. And that, of course, is why science prefers not to deal in such final causes.

But actually, avoiding teleology (ie final causation) is invariably done in the breech, rather than the observance, as I’ve pointed out before. It’s easy to spot, and become offended by, a statement that something in nature suits God’s purposes. But the whole question of “function”, without which doing biology would be both impossible and useless, is a thoroughly teleological concept. Strictly, classical Darwinian evolution doesn’t have functions, but only survivors.

The phenotypic change in my causal sequence might be, say, a less conspicuous colouration. This leads, perhaps, to less predation, and so the differential survival of that type. But it’s strictly improper to say “the gene functions to provide camouflage”, because it doesn’t, any more than a rock “functions” to stop the dust under it blowing away.

Now, the impropriety of “function” language has, historically, been disguised by the tacit assumption under the paradigm of Neodarwinian adaptationism that natural selection acts universally (as Darwin described in poetic hyperbole) to move everything towards a perfect fit for its environment. If it exists, it’s been adapted to do so by natural selection. And so it was that the first new word I learned in school biology was “adaptation”. You could use it to describe anything and get an approving tick from the teacher.

On the surface, “adaptation” seems an acceptably non-teleological word: rather than things being “well-designed” they just happen to be “well-adapted” by, perhaps, blind processes, to their role in the living organism. Except that “role”, like “function” implies a purpose, such as the imperative to survive and reproduce. In practice, “adaptation” assumes that a thing is suited, by a process you’re presupposing (natural selection) to prioritise “life” over “death”. Otherwise, you’d say something was well-adapted to dying, rather than poorly-adapted.

Now, however, even Sy’s own work is directed towards exploring the increasing realisation that adaptive natural selection is very far from being the sum total of evolution. For example, neutral theory has made much change non-adaptive. Granted, a fine-tuning role is often assumed for natural selction, but far more of what we see around us is currently being assigned to chance: a zebra’s stripes may not be an adaptation at all, but fortuitously non-lethal. And if that is the case, the word “adaptation”becomes as much an assumption of final causation as the mention of God, and far more unwarranted, because God is the necessary universal First Cause, not a hypothesized biological mechanism.

Likewise, one of the hot topics amongst alternatives to Neodarwinism is “niche selection theory”. In this, the “fortuitous” (or, of course, divinely directed) changes in a species make its old way of life untenable. In that case, some inner teleological drive leads it to change its environment, by moving elsewhere, changing its habits or, like the beaver, engineering it into a new form.

In niche construction theory, “adapted to the environment” is the complete opposite of the truth: instead, the organism has adapted the environment to suit what it is. Once more, a teleological assumption, based on the customary currency of Darwinian adaptation by natural selection, has crept into science that ought, ostensibly, to deal only with efficient causes, and making no unwarranted assumptions about whether or not any quasi-teleological adaptation has taken place.

Do you see what this means, in the post-Modern-Synthesis world? It means that you ought no more to be able to use teleological words like “adaptation” unless you’ve made a watertight case in each and every instance that a feature is a genuine adaptation produced by natural election. After all it might, instead, be an environment adapted purposefully by the organism to its own given structure, or a neutral “spandrel” thrown up by some other change, or a characteristic retained because of the limited power of purifying selection to eradicate it, or any one of many other possibilities thrown up in the flux of biological theorising going on at the moment, as the new paradigm struggles to emerge.

That will lead to one of two things. Either science journals should purge not only mentions of God that haven’t been demonstrated unequivocally by the data, but also mentions of functions, adaptations, and any other of the long list of teleological terms, unless in the individual case they have been decisively demonstrated. And that’s not easy, given how long it has taken to disprove textbook examples like the selective advantage of zebra stripes against predators (only this year), or the supposed arms race between cheetahs and Thompson’s gazelle.

But in fact, understanding reality through final causation is so intrinsic to human thinking, and therefore inevitably to human science, that any such attempt to purge biology of it is doomed to failure. Since nothing can any long be assumed to have arisen by natural selction simply because it exists, the alternative (rejecting mere prejudice) is to accept that scientists will make teleological statements of all kinds beyond the evidence, based on their particular theoretical presuppositions.

One biologist may need to declare an adaptationist agenda, another a neutralist one, yet another a niche-construction mindset… and still another, that behind all these unproven and partially competung theories, there is a Creator who works out all things according to his will.

Of these, only the last needn’t bias the science. 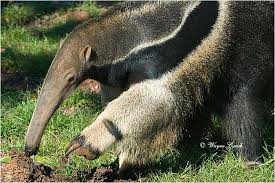 NICHE CONSTRUCTION THEORY: “This stupid snout would have starved me into extinction if I hadn’t found these little blighters would go in…”

17 Responses to Finality creeps in everywhere