Kew researcher vindicates the Hump of the Camel

Over at post 449 of 462 on the BioLogos debate between Dennis Venema (BioLogos staff member) and Richard Buggs (chief researcher in Plant Health at Kew Botanical Gardens) on population genetics predictions about early man, Richard replied to, I think, my only previous contribution on the thread. In that post I had ventured a concern I addressed in more detail in a post here:

To me the most significant thing about the debate (and something of an elephant in the room) is that all three serious participants (four, counting Gauger’s few brief posts) are engaged in answering this question: “Does the population genetics model support the possibility of a single couple, or not?” The answer appears to depend on what parameters are fed into the model, and similar technical issues. But that ignores entirely the question of whether the population genetics model is actually valid for such a situation and such timescales. And that rather depends on whether what it predicts (whichever way that turns out in the BioLogos discussion) can be validated by data, rather than solely by the output of the model itself.

In his reply Richard essentially agreed with George (GJDS) and me that there is an issue about the extrapoltaion of population genetics modeling to the long time-scales of macro-evolution. But in support of this, he cited a new paper from the Lenski long-term E. coli evolution experiment, which compares the mutational history of all twelve lineages in the experiment down 60,000 generations. The results, summarised on a graphic, are astonishing: 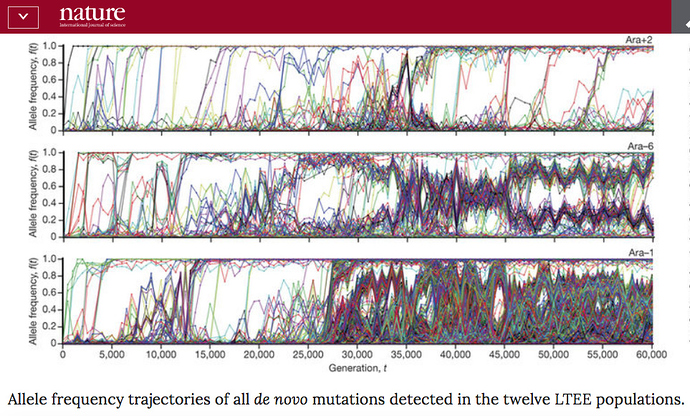 Together, our results demonstrate that long-term adaptation to a fixed environment can be characterized by a rich and dynamic set of population genetic processes, in stark contrast to the evolutionary desert expected near a fitness optimum. Rather than relying only on standard models of neutral mutation accumulation and mutation–selection balance in well-adapted populations, these more complex dynamical processes should also be considered and included more broadly when interpreting natural genetic variation.

Richard himself concludes to George and myself:

I think this perhaps supports the point you were making. It is a very very different system to human populations, but in many ways it should be a simpler system, and therefore easier to model. It underlines the difficulty of going from models to real evolution.

If we were presented with the twelve different Lenski LTEE populations that exist today and asked to reconstruct their past, I very much doubt we would be able to detect the fact that they all went through the same bottleneck 60000 generations ago.

Now, without understanding the detail, the overall picture of actual occurrences over the course of the Lenski experiment appeared to me to resemble the kind of chaotic variation one would expect in, for example, the orbits of moonlets in Saturn’s rings or the development of weather systems. So I wrote:

…Lenski’s results are astonishing because they appear to show that the neglected factors “including: changes in mutation rates, periodic selection, and negative frequency dependent selection factors” seem (to me, at least) to result in a chaotic type of divergence over 60K generations.

Would that not suggest that such things cannot be factored in successfully, in order to correct the model over such timeframes, any more than additional factors would enable one to describe the weather a year ago from calculations based on the last three days weather?

I would add that this chaotic divergence is seen in Lenski’s model system, where the environment is entirely stable, reproduction asexual and the original population genetically uniform. To apply it to humans (or anything else) in the wild, one must also consider sexual (and non-random) reproduction, migration that’s far more uncertain after recent discoveries than this time last year (with the separation and rejoining of multiple breeding populations), known (and unknown) hybridization events, and an environment changing in entirely unknown ways.

My original point had been that models can diverge seriously from reality over time. This is because all models (such as population genetics) neglect elements of reality that are thought either to be minor and self-correcting (ie on average negligible), but which may not be in the long term (or which may be supplemented by entirely unknown, significant, factors). So for simple Newtonian two-body calculations of gravity, Jupiter and the Sun may be treated as point sources. This simplification breaks down in more complex circumstances, when Newton’s model cannot be used.

Alternatively the factors ignored by the model may be only slowly cumulative and therefore negligible in the short term, but more serious over longer time-scales. An example would be carbon-dating, which gives a reasonable ball-park estimate, though becoming increasingly inaccurate over time without external calibration.

But Lenski’s graphic suggests something I’d not anticipated: significant chaos within the whole system essentially invalidates any mathematical model over the long-term. If the same initial and subsequent conditions can produce such massively different outcomes, then back-tracking with a model from those outcomes will “predict” equally divergent histories and initial conditions. In other words, the model will be as useless for unravelling the distant past as meteorology is for describing the weather on a certain day 200 years ago.

My short post produced the anticipated riposte from another poster, “liked” by three other spectators:

To acknowledge some uncertainty in the estimate does not open the door to speculation from the peanut gallery that the numbers might be off by orders of magnitude.

At this point, consider for a moment whether the same slap-down would have occurred if I had not questioned the utility of a particularly entrenched scientific methodology, but some other source of knowledge. “The Bible does not spell this out…” – well, who could disagree? “There are insufficient historical sources…” – well, who could expect everything from the past to survive? “Philosophers may make false assumptions…” – well, obviously pure reason has limitations. But suggest a possible flaw in scientific assumptions, and the response is, “Touch not mine anointed!”. The experts, I was told, would already have pointed out any difference Lenski’s results made.

My comfort at the time was that one person had “liked” my comment – and that was Dr Richard Buggs. The reason is spelled out in a more recent post of his:

I think it would be fair to say that the ranges that Joshua @Swamidass is calculating from the TMR4A analysis do not include the uncertainty that would come from some of the more exotic effects that are evidenced in the Lenski experiment. It would be extremely difficult to do so. There is no way (that I am aware of) that we could trace the 12 Lenski populations back to one simultaneous bottleneck based only on their current diversity. This is especially true for the populations in which mutation rates have accelerated in the past, and then slowed down again. There are limits to what is knowable from present day genetic diversity, and there are some questions we will never be able to give a certain answer to.

One of the characteristics of Richard Buggs that has become clear in the whole course of the debate is his pernickity unwillingness to make, or allow, claims not borne out by strictly relevant calculations. It would, I’m sure, take an awful lot more work to see how the real-world (but highly controlled-world) data of Lenski’s latest reserach might affect the applications of population genetics, especially within the infinitely messier world of small populations of complex, sexually reproducing creatures that are involved in eukaryote evolution.

One might start by applying standard P-G models to each of the twelve current populations and seeing what they predict about their past history. But who’s going to make that effort when they just have to read Lenski’s reports?

But it seems to me that the question of a single-couple human bottleneck 600,000 years ago is a mere sideshow to matters of greater significance to science. How, I wonder, would such new findings affect the use of population genetics in the construction of the molecular phylogenies that now underpin our entire understanding of the tree of life? Maybe not at all. But maybe a lot. But is there anyone whose professional interest would tempt them to invest in that work?

13 Responses to Kew researcher vindicates the Hump of the Camel