The Emperor has no clothes

There was widespread outrage on social media yesterday following a tweet by a formerly unknown costume-denialist, Wat Simkin, claiming that, at the morning royal parade, the Emperor “hadn’t got anything on.”

Within hours, a new Facebook group “Swat Wat” had attracted over 3,000 supporters, but calls for Simkin to apologise have, so far, fallen on deaf ears. Ezra Bendit, an expert on royal costume and the Director of Tailors for Justice, said, “There is no place for ignorant bigotry like this in society. No doubt someone is paying him well for it.”

The Emperor, whose popularity ratings have never been higher, was unavailable for comment today, but a royal spokesman said “In any democracy there will always be a few parasites.”

“Walter Simpkin, the student who tweeted yesterday that the Emperor is a flasher, has had his Twitter and Facebook accounts suspended. A spokesman for the latter said that Simkin’s remarks on Twitter violated their community standards. Simpkin has no YouTube presence, but a video supporting his stance by the well-known anti-democratic group Please may I ask something? has also been taken down.”

Stepney University has expelled far-right anti-democrat campaigner Wat Simpkin from his course, after Simkin, who was in his third year there studying physics, was reported as saying, “I only tweeted about what I saw.”

Stepney’s Vice-Chancellor, Indira Monk, said, “We are committed to tolerance and diversity here, and unfortunately this gentleman, by using hate-speech against our beloved Emperor, and railing out of hand against the clear consensus of public opinion, has abused that commitment. We have been left with no alternative but to terminate his participation in the University’s life.”

“Wat Simpkin, whose Tweet about the Emperor’s new clothes led to his dismissal from Stepney University, and to ongoing Antifa protests outside the flat he shares with his wife and baby daughter, has issued an apology for his words through his solicitor.

“‘I regret from the heart my remarks, which were clearly untrue and wrongheaded. I can only say that I made a bad choice, and I very much regret any distress I have caused to the Emperor, his tailors, and the costume community as a whole.’

“When asked if Simpkin will be reinstated, a spokesman for Stepney University said the matter was now closed.”

Officers from the Metropolitan Police visited Walter Simpkin, whose tweet about the Emperor’s new clothes has caused a furore, at his home this morning. A spokesman from the force told Metro,  “We have received a number of complaints about Mr Simkin’s words, and we are bound to take seriously all incidents of possible hate speech brought to our attention by members of the public. Mr Simkin was interviewed under caution, and at this stage it remains unclear what, if any, action will be taken.”

Channel 4 Out for the Count documentary, 14th September __21

Interviewer: “Wat, you’re now working as a factory cleaner under an assumed name. What lessons do you take from this unfortunate period in your life?”

Simkin (shifts in seat and gives wry smile): “I read a proverb somewhere: ‘It is more blessed to be average than right.’ That seems to be true in our culture, where ‘public opinion’ is arrived at by what people dare not say. Needless to say, I know now to trust the consensus rather than my own lying eyes, and I don’t discuss public affairs much with the people at work. But it is odd how many cases of hypothermia the royal household has suffered since the Emperor’s new tailors became their official contractors…”

“But he hasn’t got anything on,” a little child said.

“But he hasn’t got anything on!” the whole town cried out at last.

The Emperor shivered, for he suspected they were right. But he thought, “This procession has got to go on.” So he walked more proudly than ever, as his noblemen held high the train that wasn’t there at all. 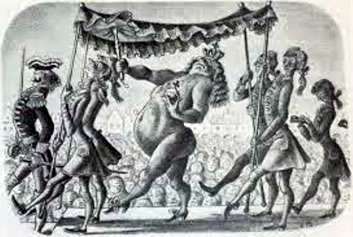 3 Responses to The Emperor has no clothes