Romans 8.28-39 is, unquestionably, about assurance. And it touches upon the “doctrines of grace” covered in a few recent threads. A few years ago a charismatic friend of mine (now deceased) used to point to verse 38, where it says:

For I am convinced that neither life nor death, neither angels nor demons, neither the present nor the future, nor any powers, neither height nor depth, nor anything else in all creation, will be able to separate us from the love of Christ that is in Christ Jesus our Lord.

And he would nod gravely and say, “There’s one important omission from that list – ourselves. God has done everything for us, but we have to make sure we ourselves overcome, or we may be lost.”

Now a chain is only as strong as its weakest link, and it seemed to me a very self-confident man who would retain any sense of assurance if my friend’s opinion were true. My meditations turned into a couple of rather badly drawn cartoons – the first intended to illustrate his version of assurance, and the second what I take to be what Paul is really getting at, taking into account verses 29-30: 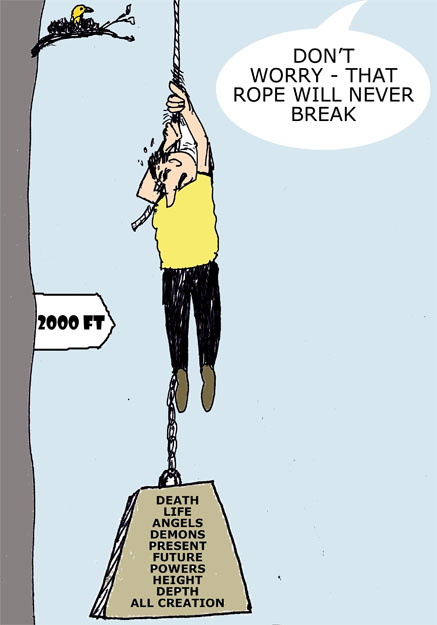 Those verses, if you don’t know them, are these:

The thought of this verse as a golden chain of salvation (as opposed to an air-sea rescue harness) goes back to Beza. It has been much argued against since Arminius on lingusitic and theological grounds. But this seems to me a case where the picture tells the real story.

3 Responses to Two interpretations of Romans 8