My apologies for continuing to pursue the prevalent theological view in Evolutionary Creation (aka Theistic Evolution) about a universe given freedom by God to create itself and so on, as I’ve done in recent posts and many others before. My main arguments have been, and remain, its incompatibility with the scriptural witness to creation, and the incoherence of the concept itself. But a further aspect occurs to me which may be worthy of some comment.

The source of the free creation idea, as I’ve said before, is in the writings of the science-faith theologians, whose scientific roots are more often in physics than biology, and whose theological underpinnings are in process theology and panentheism, and in the modern kenotic theologies of people like Jurgen Moltmann. Nevertheless, these writers apply their thinking very much to evolution, and thus it has come into Evolutionary Creation and BioLogos (using the latter the term in Francis Collins’s “ideological” sense here).

It’s of note that the kind of evolution favoured (by biologists), or sometimes assumed from professional deference (by theologians), in these positions is classic “survival of the fittest” Neodarwinism. As has often been noted, BioLogos (the organisation) has had little to say in favour of those who posit anything beyond the basic naturalist-materialist processes of stochastic mutation and natural selection, such as self-organisation theories, natural genetic engineering, panpsychic metaphysics and so on. The whole stress is on known laws and chance as the rather unintelligible “freedom” given to an equally unintelligible collective entity “the universe” or “creation”.

This accounts for the heavy emphasis on the suffering and waste of nature – the classic Darwinian “struggle for survival” – with a resulting focus on theodicies of natural evil. The occasional voices of evolutionary theorists (since Darwin’s own time, actually), who observe cooperation and similar positive aspects of nature in addition to competition, receive little airtime except in the conventional form of altruism as a survival strategy and so on.

This is odd, when you consider it. The “freedom” that God gives to creation, supposedly out of self-giving love, is usually seen as in some strange way a necessary prerequisite for the existence of what pretty well all TEs agree on: the moral and spiritual freedom we experience as humans. But as I’ve noted before, that “freedom of creation” is represented not only as an instrumental means to humanity’s liberty, but as a required good in itself. God’s planning and making of nature’s forms, by whatever means, is universally portrayed in lurid terms as oppressive, coercive, imprisoning and so on: nature must be free to create itself without “interference” from the God  outside.

Yet this freedom seems to be given  “creation” in the abstract, by which is apparently meant something like “the evolutionary process”. What this “free” process leads to, however, is actual, living and breathing physical organisms, which are a lot easier to conceive as individuals perhaps valuing freedom. All of us can imagine a chicken appreciating being free-range rather than existing in a battery-cage, even though we can’t with any certainty prove that one is happier than the other. Whether anthropomorphically or not, we can even attribute some minimal sense of desire to a humble amoeba, since it clearly exhibits preferences.

And yet the “freedom” that the allegedly autonomous Neodarwinian process confers on these sentient beings is merely the freedom to struggle for survival in competition with both other species and other members of their own. It is not even the freedom to adapt or die, because they don’t choose their genes – they just survive or perish according to the cards they’ve been dealt. Where, actually, is the freedom in that? That’s what happens in a death camp, isn’t it?

Now if I bought into this freedom-of-nature, emptying-of God, theology, I’d be a good deal more critical of the concentration-camp biology it was designed to support. I was interested to read, yesterday, an article by German ID geneticist Wolf-Ekkehard Lönnig, critiquing the mythology of giraffe evolution here and here. In the second part he questions the explanatory power of sexual selection both in giraffes and more generally, referring to bower-birds and birds of paradise in their extravagant displays:

What intigued me in this was the most non-Darwinian idea of animals evolving to make purely aesthetic or pleasure-based choices, instead of spending every waking hour struggling to survive and breed, or pandering to some fortuitously-evolved sexual preference by the female of the species. Would it not be likely that if a loving God gave nature creative freedom, then we’d expect to see beauty and variety for its own free sake, as well as for utilitarian advantage? Wouldn’t we find it hard to account for some phenomena simply because “nature” had taken God’s call to freedom seriously rather than playing out The Lord of the Flies at the first opportunity? We might see, perhaps, gratuitously tall and graceful giraffes, elaborate bird courtship, butterfly wings with eyes that look good (even though they confer no better than those of plain large whites), reef fish in primary colours, lilies dressed better than Solomon… oh, we do, you say? Now there’s a thing!

Now an alternative, better, explanation in my book is that God spread abroad his goodness in these forms (no doubt through an evolutionary process) to glorify his name, rather than the creatures mysteriously acquiring artistic prowess of their own. Yet, given the primary and secondary causality recognised in  classical Christianity, those two aren’t entirely incompatible. 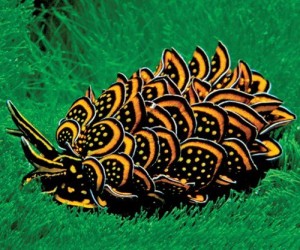