This piece arises from some discussion on the last post about the mathematical predictability (lack of) in evolution.

Question: Is this the image of an insect, or not? 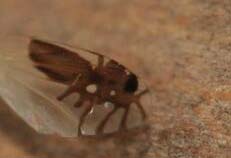 It depends what you mean. It’s actually an image of part of an insect that’s caused a minor news stir this week: 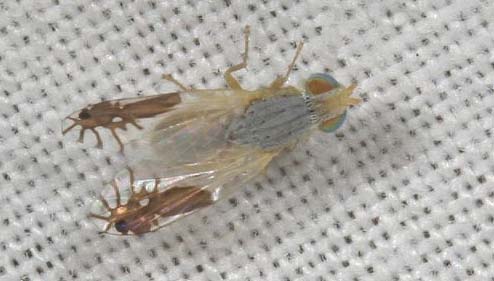 But as for the “image” on the wing, what does that word actually mean? Can “image” be separated from the teleological concept of “intent”? The news story in question  takes a straight adaptationist line. The images on the wings evolved by mutation and natural selection as obvious defensive mimicry. We know it works because there are plenty of Goniurellia tridens out there in the UAE.

That raises all kinds of questions about the astonishing artistic abilities of good old ND mechanisms. It’s easy to see the “insect”, and why it should have survival value. But even if it didn’t look like an insect, it must have survival value, because there it is – does its remarkable appearance explain its arrival?

If we found an insect with the Lord’s prayer in gothic script on its wings, on the adapationist model it must have survival value because it survived, and it must be possible by random mutation because it was there. Nothing specific is thereby explained, and the biologist has no warrant to do anything but shrug and say, “Nothing to see here except what evolution predicts.” How could it be otherwise? But as  defence mechanism it’s hard to imagine that anything less than a pretty good image would have any survival value at all – and if it did, why refining it to the nth degree would provide much extra benefit.

But is there anything to explain anyway? An entomologist has written a considered response in which he argues that the whole thing is “faces in the clouds”. Other Goniurella species have slightly less insect-like patterns: 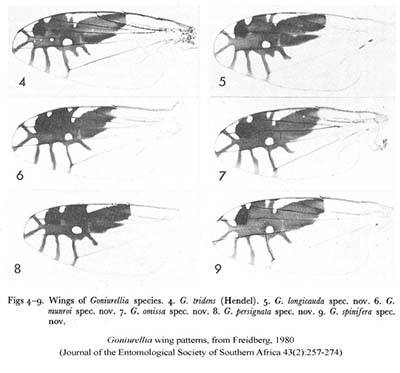 And closely related species have obviously similar patterns that don’t resemble anything much at all, unless predators like Rorsach tests. 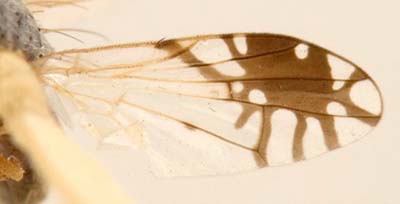 One of  the commenters on that article suggests that the pattern is likely to be non-insect-like in the UV region used by potential predators. So maybe it’s not defensive – maybe it’s mimicry for sexual selection, since the flies use their wings in elaborate mating displays. Or maybe it’s just a random pattern variation, and only humans see an insect on the wings.

Any adaptive story, if one thinks about it, is considerably weakened by those comparisons with similar species. If mimicry is that good either sexually or defensively, the poor mimics ought to have been replaced entirely by Goniurella or its like. As it is, it’s equally incumbent on us to explain the success of all the other interesting but non-pictorial wing patterns, since each, on the adaptive model, has a selective advantage.

In fact, given the survival of all these variants, both adaptive and nonadaptive explanations leave us with a problem of meaning: we are convinced (or most of us) that Goniurella has ants on its wings. But that is a purely human assessment, whether at the instinctive level, or whether we have some metric of the graphic information that corresponds closely enough to an ant to cross some scientific threshold for similarity.

All we know apart from that is that insects with those patterns do OK. It’s pretty hard to research relative predation (witness the long controversy over peppered moths), but virtually impossible to be sure if the completely-fortuitous-pattern-we-see-as-an-insect makes a difference, and if it does whether the predators are actually taken in by mimicry – maybe G. tridens just smells better than G. omissa.

But, in an ateleological system, Goniurella doesn’t think its wings are ants. The genes didn’t evolve to imitate an ant. And if predators or mates act as if the wings are ants, even if we could be sure of that, we could also be sure that they happen to react to a fortuitous pattern, and not to an image. Stuff just happens.

Mimicry, then, like any function, is a teleogical human theory grafted on to the data to no real explanatory purpose, as far as efficient causation goes.

One might ask whether directed theistic evolution provides any better explanation. The thing is, I’m not sure such explanation is strictly necessary, though of course theistic science is about trying to think God’s thoughts after him where possible. Materialist science must explain everything in the Universe by cause and effect, because that’s all there is. In theism there are other levels of causation not amenable to scientific investigation. If we believe it’s an adaption for mimicry, though, some teleological component certainly seems more plausible, to me, than random variation alone, whether that be internal or external.

But theistic evolution no more has to be adaptive than neutral theory. God might do variation for its own sake, and might well be thought more likely to indulge in aesthetics, knowing the outcome will not be disadvantageous, than blind evolution, which one might expect to cling on to what actually works. For God, the occasional insect portrait (or Lord’s prayer on a fly’s wing, for that matter) might even be a nod to us and our penchant for image-making.

18 Responses to Evolution, function and meaning