Since I am a math teacher rather than a theologian, I bring tools to the table that must be subject to the scrutiny and criticism of the real theologians already there.  So what does a hammer-wielding math teacher see in current popular theological discourse that looks to him like his proverbial mathematical nail?

Let me start with my tool of choice:  Calculus.  In this discipline we make use of the simple algebraic concept of coordinate location, using equations called functions to model or predict where some point should be on a graph as a function of its horizontal location.  So if a function is described by the equation y = square root of x, then we know it will be at a height of 2 when x is 4, or it will be at 3 when x is 9 and so forth, all of which fall on a smooth curve. 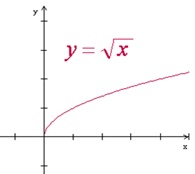 Plot of square root of x

Calculus students take an interest not just in where the curve is for a given horizontal location, but also where it is going.  I.e. we would like to know its derivative (math jargon for its slope, or how steep it is) at that point.  Is the curve at that spot nearly level such that advancing just a bit horizontally would yield very little rise or fall?  Or is the curve very steep at that point such that a small horizontal advance would yield a very large vertical change?  And furthermore, how fast is the curve steepness itself changing?  To answer all these questions, one has to look beyond the state of the function (where it is) at the point in question, and examine the points immediately preceding and following in order to evaluate function behavior around that point.  And this brings me to my proposed theological application.

We spend a lot of time studying what various great church fathers wrote about scriptures, creation, humanity, and the Divine direction in the midst of it all.  This is as it should be, since we are a part of history with both location and direction just like a curve or line on a graph.  So if we are to know our place and direction in history we should be well-read on those who have best been able to articulate a coherent, and (with regard to Scriptures) a divinely inspired account for us to study.

The first of those two approaches is this:  evaluate where the respected historical authority stood on the issue at hand, by examining their writings for direct references to that issue.  That is, determine a position much as a mathematician might plug a number into a function and evaluate the resulting output.

An example of this ‘positional evaluation’ approach is used when we dispute over issues of how Christians should live, work, interact with government, etc.  We ask, what did the early church and apostles do?  And some may seek to emulate what they find.  If a religious tradition sees great importance on, for example, the mechanics of a baptism ceremony, they might appeal to scriptural precedent.  Did the apostles baptize by sprinkling water on the head?  Or did they find the nearest body of water and fully immerse?  We look for scriptural precedent on many subjects.  Did early Christians take up arms?  Or were they pacifists?  Once the answer to the particular issue is located in Scripture or other writings, then for the ‘positionist’ the argument has been laid to rest with finality.  The faithful need only emulate.

It gets more difficult when the issue is exclusively a modern one about which the ancient writer had no knowledge.  It is impossible to directly see what any of the apostles might have thought about electronic computers since such novelties were not part of that culture.  Or what did Moses think about other galaxies?  There is no direct reference to which to appeal.  It simply was not in their ‘domain’ of consideration.

‘Domain’ is also the mathematician’s word for the numbers that may be plugged into a function.  Note that negative numbers are not in the domain for the square root of x.  The curve abruptly terminates at zero.  It is no good asking where the function is as we go to the left.  It simply isn’t there.  But we can productively ask where it goes as the curve disappears off the right side of the graph.  We call this extrapolation.  Just because writings (or plots) do not show our answers directly, mathematicians and theologians don’t throw up their hands in despair.  We draw out inferences, find the rules in play and use them to find valid answers for new situations.

We find this in play, for example, at Biologos with a posted 2-part essay about St. Thomas Aquinas in which the author speculates about how Aquinas would view current evolutionary thought.  Others write about earlier church fathers like St. Augustine of Hippo, or even apostles and earlier prophets themselves, making variously supported conjectures about how some of them would approach today’s issues.

This second approach I’ll call the “trajectory” method.  ‘Trajectory’ implies motion and change along with the calculus concept of a changing slope of a curve.  We see this approach exemplified when the appeal is to consider the “movement” of the Spirit in some past situation.  For example, is the command, “an eye for an eye” a static command to be followed even today and for all time?  Most Christians will readily acknowledge that such a command was a needed limitation *in its historical context* on the open-ended vengeance in which a whole village might be murdered over the rape of one woman.  But the Spirit was not finished with the people of God as would be seen with Christ’s later commands in which even limited vengeance is taken off the table.  The people of God are being taken somewhere – we see movement.  Even limited vengeance is not to be a final position for the people of God.

Some of the more fundamentalist atheists cannot imagine any notion of ‘movement’ on religious questions and answers that are purported to be from God; they insist that a static God would have plopped one law down for all time delivering all of creation instantly to a final paradise.  This rigidly positionist stand does not allow for consideration that a personal God might do something in any other way; thus they reject God.  But back to the trajectory approach…

A church in our local community has a poster up stating:  “Never place a period where God has placed a comma.”  To which I imagine a conservative reply:   Would these folks ever acknowledge a period if God used one?  Or is God never allowed to use periods?  That poster expression epitomizes a ‘trajectorist’ approach to issues.   Regardless of your own comfort with one end or the other of this, we should acknowledge that both are needed, and our balancing between both, sometimes closer to one than the other is already part of our theological life and was for early Christians too.

See, for example, how they dealt with new issues in Acts 15.  It is the ‘solidly’ (if one may excuse the use of that word here) trajectorist notion in play when Christians today argue for more openness to, for example, alternate sexual orientations; or for dropping strict Sabbath or food laws (with curiously little controversy around the latter example).  While staunch positions can be found denouncing many things as abominations –even in the New Testament for some of these, the trajectorist rightly points out that the early church met to consider some new questions in new ways, and had to discern where the Spirit was leading rather than what historically static position could be found for adherence.

This all remains in play today as well as we consider science issues that were largely non-existent for all the early church fathers.  So we lean on trajectories revealed from their writings including the Bible itself for clues to their attitudes and how they moved in response to similar issues of their day, deriving hints as to how they might respond to our new issues.  I suggest that this is not just a modern addition to theological traditions, but a time-honored (more importantly a Scripture-honored) approach in seeking to apply God’s Word across every aspect of our lives in any age in which we find ourselves, so long as the trajectorist does not use his approach to the exclusion of all positionist claims.

It is a fair question to ask what a Calvin, Aquinas, Augustine, Paul, or yes – especially Jesus, would do given such information input as we seem to have in today’s intellectual climate.  Indeed, the very existence of so many valuable church writings for the last couple thousand years implies the continuing movement of the Spirit even if one does accept the finality of a closed canon.  Acknowledging a firm foundation does not repudiate the existence of valuable layers of structure built upon it.  Indeed the Lord will someday reveal if we build with gold or straw.

So what are the inferences that we can legitimately use, and where do they – where does God – lead us?  Well, that is where the rubber meets the road just as my essay here conveniently comes to a close.  But it is on these interesting points that so many others launch in as can be found here and at various other web outlets.  I simply wanted to provide a hopefully useful tool for readers to identify how issues are being presented as the debate continues.

Merv has been a teacher at Flint Hills Christian School since 1993 and has also been active with his family in Manhattan Mennonite Church. Science and faith issues have long held his interest both personally and professionally, and he is passionate about cultivating a more robust intellect among the wider Christian community in the service of Christ.
View all posts by Merv Bitikofer →
This entry was posted in Merv Bitikofer, Science, Theology. Bookmark the permalink.

16 Responses to Bringing Mathematics to Theology