Go to the Ant 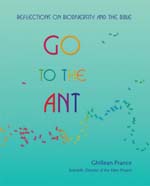 Here’s a review of a book of meditations on scriptural passages related to nature, published by the Iona Community. I’m not really one for books of meditations (with the notable exception of the work of Thomas Traherne), but I got this one because it’s by a near neighbour, Prof Sir Ghillean Prance, FRS. Ghillean has an astonishing CV – amongst many things botanist, Amazon explorer, Fellow of the Royal Society, former director of Kew Gardens, scientific director of the Eden Project, vice-president of Nature in Art Trust and a trustee and former chairman of Peter Harris’s A Rocha. Peter is astonished how he packs in so many activities even in retirement.

He’s also a member of the Baptist Church in our nearest Jurassic Coast town (which was a church-plant from my church, back in 1653), and it’s his longstanding Christian faith that brought this book into being.

It’s not the most scientifically academic book in the world, being written for the ordinary Christian-in-the-plastic-chair (Baptists here seldom do pews), but if I’d have wanted botany I’d have bought one of his many published scientific texts. It’s a mark of the man that he is happy to write for the non-scientific lay-person, challenging them not intellectually, but spiritually.

What you get in this book, though, is a glimpse at pretty well every aspect of creation doctrine that we’ve covered on The Hump (and probably a few more). His overarching aim is to show just how interested in, and observant of, the natural world both Jesus and the Bible writers were. As I’ve said, he does this in the form of brief meditations of a page or two.

In some of these, following the passage in Proverbs quoted in the title of the book, he imitates the Bible and the traditions of classical theology in drawing spiritual and moral lessons from nature. It’s interesting how, in doing this, he expands the biblical text from modern scientific discoveries, including his own, for instance using as his example-ant an Amazonian species, later cutting back to describe the middle-eastern species that would have inspired the biblical author, by way of contrast.

In some cases he will, again like Scripture, simply draw attention to the wisdom and power of God seen in creation – here’s where his personal experience really comes into its own – he sees in King Solomon a man after his own inquiring heart. In others the Bible’s teaching on the creatureliness we share with the beasts (as in Psalm 104) is emphasised: man is special, but not more important, than the other terrestrial creature. In others still the old Augustinian theme of the goodness seen even in those creatures we consider dangerous or violent, as part of a wise created order, is expressed.

And throughout, as befits modern issues and his own concerns, there is a strong challenge to human selfishness and the exploitation of nature, and a call to conserve it. Along with this there are comments on the parallel challenge for Christians to seek justice for the poor. And there are several mentions of the dangers of global warming, which will not please some of our Republican brethren across the pond, I suppose, unless this winter’s storms finally wake them up (I never expected to have my cousin in Nova Scotia contacting me concerned about my safety from the weather!).

The issue of evolution gets only one mention, and that is simply because the nature of the subject matter doesn’t really warrant more. But from other sources I learn that Ghillean’s hero is Alfred Russell Wallace, and I conjecture that that is both because of his fellow-feeling as an explorer (he has lived with at least 16 Amazonian tribes), and Wallace’s teleological (if not strictly theistic) approach to evolution. Indeed, from Prance’s comments on certain passages, it is clear that he is a theistic evolutionist in the English Evangelical mould modelled by Oliver Barclay (Ghillean was once President of Christians in Science, the British equivalent of the ASA, which Barclay started): that is, evolution with a strong doctrine of providence. I’d like to discuss that with him some day to see how well-developed it is – hopefully more so than the commonest US version.

I’d see this book as intended for devotional use. But it is also a useful primer on the breadth and depth of Christian creation doctrine, which might open some eyes in your church-members to the issues, whet their appetite to look further, and perhaps challenge them to committed action on behalf of that creation in all its aspects. In other words, it’s the Hump of the Camel for plain folks. The fact that it comes from the pen of one of Britain’s greatest living scientists is another bonus.

6 Responses to Self-help for sluggards