One of the common apologetic themes back in mediaeval and early modern Christianity was that the antiquity of Hebrew religion over the alternatives – in particular the Greek pantheon – gave it de facto legitimacy. That argument has, of course, worn thin in the light of both archaeological and historical studies. But the reconstruction of an historical Adam which I’ve been describing in the last couple of posts, based on the excursus by N T Wright in John Walton’s new book gives it a new theological (as opposed to apologetic) impetus.

For such a view places Adam and Eve in the mainstream of the Bible’s missiological message, as opposed to being a purely ontological preface to that overarching Scriptural theme. To clarify that, by “missiological” I refer to what is called Missio Dei, the Mission (ie “sending”) of God to the world in order to bring it into relationship with himself.

If we start with Abraham, we see God calling one man who, through learning from God in faith and receiving his blessing, is promised that he will become a blessing for the whole world. Genesis 12.1-3 can be seen as a literal “mission statement” for the salvation history through Israel, which is to say the whole Bible.

The promise is kept alive despite various challenges during the patriarchal period of Genesis, until in Exodus Israel is called as a nation, through Moses, once more to bring blessing to mankind by embodying Yahweh’s blessing through their faith relationship with him and their subsequent righteous behaviour. Both their ongoing relationship and their failures lead to other acts of mission by God – the sending of the prophets and anointed kings – to try and keep Israel on track and, though them (as we read particularly in Isaiah) to bring the rest of the world into faithful obedience to God.

Even the religious disaster of the Exile played its part in the unfolding plan of Yahweh, leading as it did to the announcement of the New Covenant of grace, to be implemented through Messiah, as we particularly find in the later chapters of all three major prophets and Daniel. John the Baptist is the final messenger sent by God before that occurs, like all his predecessors sent in order to call people back to obedient relationship with God, so that (in the angel’s words to John’s father Zechariah) the disobedient would be turned to “the wisdom of the righteous” – that is, the kind of wisdom which ought to have been gained in Eden for mankind’s service of God on earth.

The last to be sent from God is, of course, the Son, and as I stressed in the previous post his message was primarily the Kingdom of God, that is, salvation from sin as the portal to reigning as God’s vice-regents in the fruition of his final purposes for the cosmos.

We can easily push that missiological role back to the story of Noah. 2 Peter describes Noah as a preacher of righteousness, not merely saving himself, his family and their pets from destruction, but sent first by God to try and turn corrupt mankind from their evil ways back to Yahweh’s purpose.

Now, if we view Adam too as a man called from his race into relationship with Yahweh, a representative who would receive the blessing of eternal life, and wisdom through the torah of God’s personal tuition and then spread it through the world, we can see that he stands in exactly the same tradition as all the prophets and saints, and latterly as Jesus the Son, who is so crucial as to be the second Adam. In all cases God calls by grace (not works), teaches by revelation (not human insight), trains into righteousness (not conformity to human ways) and blesses eternally (not temporally).

Not only, then, do we now appreciate Adam as the first of God’s “missionaries” to the world, but we see that his message of faith and obedience, his work of serving God freely and “without fear in holiness and righteousness all our days” (Luke 1.75) and his reward of eternal life in God’s presence in a transformed cosmos are all of a piece with the gospel we have received through Christ. The continuity is complete, except that where Adam and his successors failed, Christ conquered.

The gospel truly is, then, eternal (Rev 14.6) – it was what Adam heard from God himself, even before he sinned against it. If, as Irenaeus insisted, Adam is redeemed, then for all his historical distance from us, his testimony will be familiar to us when we meet him. For Jesus Christ, contrary to certain recent teaching, is the same yesterday, today and forever. 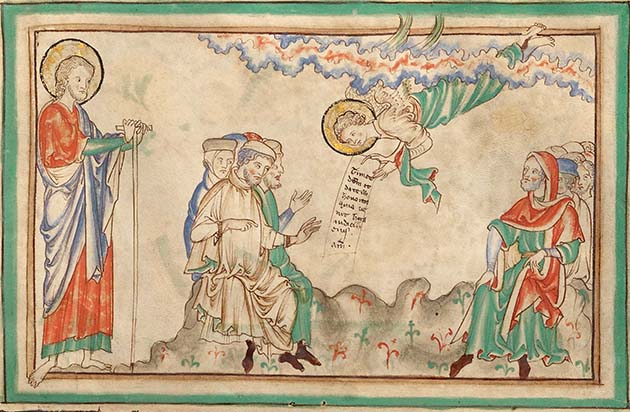