I don’t know exactly how the genetic theory of biology fits into the questions of propaganda and public opinion we’ve been discussing in the last few posts, but for one reason or another it seems to have a grip on the popular imagination far beyond their understanding of science. I was prompted to this line of thought by chatting to my neighbour by the garden gate last week.

Outside his day job he’s also an organiser of our local patients’ group, and so has an active interest in matters medical – probably a good deal more than I now have, which is a sad reflection on the effects of a career in a state-run health service. So it’s not surprising that the conversation drifted to such matters, and he said, “The really exciting thing is how they’ll soon be able to tailor drugs to the particular genetic causes of individual diseases.”

Now, as far as I can see the “really exciting thing” that came out of the Human Genome Project more than a decade ago, albeit a rather depressing thing for hopeful medical researchers, was the realisation that being able to map 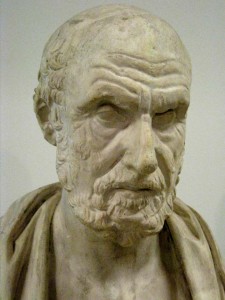 genomes gives us surprisingly little insight into common diseases. That’s because they invariably involve a multitude of often only tangentially related, and hugely variable, genetic loci interacting with an equally diverse bunch of environmental and lifestyle factors. The exceptions are those rare genetic disorders, most of which had already been identified as such when I was at medical school. And most of the environmental factors were those known to Hippocrates and studied by his school of medicine, but virtually ignored by modern medicine in its quest for biological “magic bullets” in an entirely  mechanistic model of medicine.

Yet my neighbour’s lack of awareness of this is completely understandable, for news articles about new genetically-targeted drugs appear regularly in the mainstream media, far more often than those about renewed research on how to lead a life that renders the multitude of indirect genetic predispositions less dangerous. In the UK, such stories often appear in connection with hard decisions not to fund these new drugs in the NHS because they are so exhorbitantly expensive. If genetically tailored drugs are the future, the dilemma is that there isn’t a health-service in the world able to afford them, unless the tailoring were restricted to the genes of the rich.

So we now know that, for most major diseases, there are no magic genes to target. Yet the informed public, like my neighbour, still believe that genetic medicine is the promised land of health provision. Why is that? 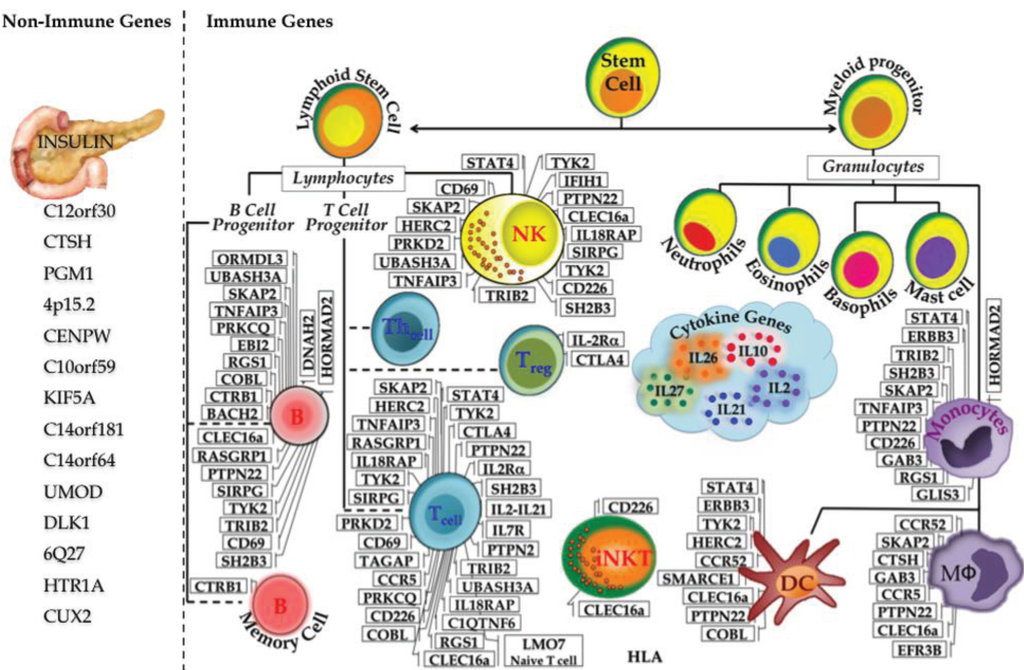 Some of the genes to target in Type 1 Diabetes

The same thing is broadly true of genetics and human behaviours, as we’ve discussed a little recently in relation to human sexuality. Even more so than in physical diseases, the genetic basis of complex behaviours is, both from the molecular and the sociological sides, increasingly known to be diffuse, non-specific and outweighed in practical terms by the effects of our intelligent interaction with them and with the multitude of factors in our environment. There are no doubt genes that predispose to criminality, and others that predispose to helping old ladies. Some of them predispose to both. None of them are predictive of complete behavioural patterns, and how could they be when the computing power of the entire genome couldn’t code for anything as complex as what we do every day?

If there weren’t already a mass of research on it, my own personal identical twin study gives me abundant evidence that genetics forms only the broadest backdrop to individual behaviour. In my daughters’ case, the first evidence of the importance of individual factors was shown at less than a week in age in a differential susceptibility to Herpes zoster virus. Things diverged from then on – to the extent that now the most surprisingly similar behaviours (like the independent choice of identical shoes) are better explained by telepathy than genetics. Same genes – widely differing suites of behaviour. Ergo genes didn’t code the behaviour, or at least to no greater extent that the constellations can be shown to code for personality and life events.

Yet the press remains full of evolutionary psychology stories that, frankly, fly in the face of the evidence for what moulds human behaviour where it can be directly studied. Here’s one particularly crass example from this weekend. The strapline reads: “A new study finds that half of human cultures don’t practice romantic lip-on-lip kissing. Animals don’t tend to bother either. So how did it evolve?” Near the end of the article is some froth about pheromones and other plausible evolutionary excuses for kissing. But the article totally ignores the glaringly obvious fact that kissing did not evolve at all. No evidence is offered for its spread through the human population, like that of lactose-tolerance following pastoralism (or so one supposes – adults must have first chosen to drink milk on enough occasions for the mutated genes, once they arose, to be selected at all). And from the beginning it’s admitted in the article that 54% of cultures don’t do it. Kissing, that is. Nothing about it even looks genetic. 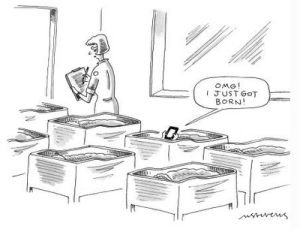 You don’t even need to do research – just a quick thought experiment – to be quite certain that if you adopted a baby from a non-kissing culture, he or she would be snogging with the best of them come high school. Conversely, your own baby, if you sold it and it was brought up in their culture, would have no predisposition to anything other than nose-rubbing or whatever they practised, unless by that time the Western media had taken them over. Kissing didn’t evolve, and it’s not genetic – it’s as culturally determined as hip-hop or sexting. Or arranged marriages. But the esteemed BBC news ignores all that and is still on about its evolution. Why? Even when we were unaware of all this, 42 years ago, I (quite fortuitously) cynically mocked the genetic basis of kissing itself in a song about love in a Darwinian world:

Evolutionary returns
I get from your sweet kiss that burns
With saliva and with germs
From you.

It seems nobody in evolutionary psychology or journalism got the joke.

Which leads us neatly to the thinking within evolutionary science itself. One thing the HGP famously showed was that figure of 98% similarity between the human and chimp genomes (or the varying estimates either side of that). The most obvious first conclusion from that ought, surely, to have been, “There’s something wrong there – there has to be more to this than genes, then.” But you’ll be well aware just how often, even on a site like BioLogos, the message has instead been, “It just shows how similar we really are to chimps.”

Now, I grant that the initial reponse was predicated on the old assumption that genes = protein coding, and that protein coding = organism. Although it has been followed by, and perhaps helped lead to, a state of theoretical flux, even the most genocentric scientists are now beginning to accept that control genes have a significant role, that where genes are positioned is more important than was realised, that differential gene expression opens up the options and so on – in short, that the human genome probably differs functionally orders of magnitude more than that couple of percent indicates. As the years go by, I’m confident that the differences will come to be stressed far more than the similarities.

But where does that take us overall? Was the chimp of a decade ago any less different from the human than today’s, because we now discover unexpected levels of genetic complexity? Any fool can get to know a chimp and have no problem realising it’s fundamentally different from us, for all the superficial similarities, which may indeed result from a close evolutionary relationship. Probably even the chimps know the difference just as well. Such a person, told about the different repetitive elements, the reverse and multiple transcription, the orphan genes, the different histone structure and so on will (being a fool) glaze over about the details, but still nod and say, “It doesn’t surprise me at all.” Because he’s been to a zoo and seen a chimpanzee. The problem is those more educated people who were (or still are) so convinced that everything lies in that 2% codon difference that they simply couldn’t see that brother chimp is only a second cousin. “Believe the theory, not yer lying eyes” (as I believe Americans sometimes say).

So to conclude, scientific theories may come and go, and that’s not only not a problem but a positive value of science. But there are interesting forces at work when a theory becomes such a public juggernaut that your informed neighbour, your BBC journalist, your health budget, your supreme court and so on blithely ignore the way science has convulsed, and still worship the gene… whatever that mystical thing may be now it can no longer be “1 gene-> 1 protein”.

Postscript – I have just this minute seen a rare black wild rabbit though my study window. Now that, I’m happy to grant you, is all about genetics. Though, it seems, it’s neither simple Mendelian mixing nor adaptive evolution, but a frequently recurring melanistic mutation. Still, it’s a long way from evolutionary kissing. 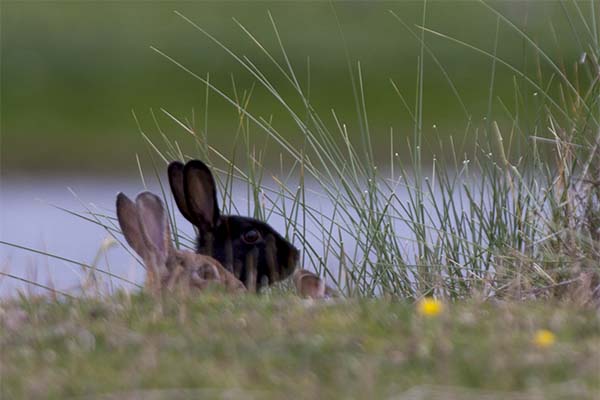