Tomorrow (in case you forgot to organize a party) is the 600th anniversary of the Battle of Agincourt, when King Henry V and his small band of proletarian archers defeated the aristocracy of France, and the media has not failed to remember it. Significantly it’s had its English pronunciation, with a sounded final “t”, restored after decades of hearing it said the French way. That’s relevant to my post, which is about providing a clearer understanding of the word “myth.” 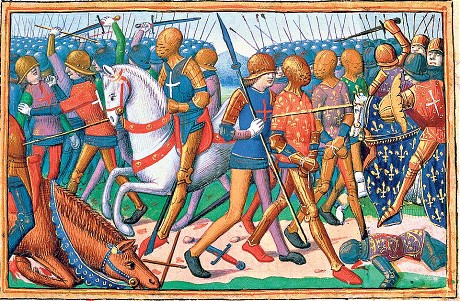 For Agincourt is undoubtedly a myth to the English people. As a historian pointed out on the BBC this morning, the event is regularly brought to mind at times of national crisis, and when it is, it is Shakespeare’s version of it, rather than that of the historian, that is heard. The most famous telling of Henry V, the film with Lawrence Olivier, was made in 1944 with a clear linkage to the war being fought at the time, ironically partly to liberate those damned French.

The message was that the courage of the British common man, albeit outnumbered and out-gunned, would prevail against the aggressor just as it had back in 1415. And for all we know, sufficient hearts might have been stirred by it to affect the outcome of the Second World War.

And it is in this sense that Agincourt is a myth, in the proper rather than the popular sense of the word: it is a story that provides a paradigm for the way the world is (in this case, the way Britons would like to be). Now, notice that such a definition is actually orthogonal to the question of historical truth.

In the case of Agincourt, the “historical accuracy” of the story is a nice point, and much argued. On the one hand, the events it describes undoubtedly happened, broadly as Shakespeare described. But all history is selective, even before it is stirringly fictionalised, and Henry V himself was a master self-publicist. Shakespeare’s play appears to treat Henry ambiguously, and the play has been produced as a paradigm of the heroic underdog (as in the 1944 film) or as a Machiavellian anti-war polemic (as in the more recent remake). Even serious historians disagree along the same lines: a trial of Henry V was actually held in America, and concluded by a narrow margin that Henry was in the right rather than a war-criminal.

But that all history is selective does not make it any the less truthful. That’s the case for “mythical history” too: as the stirring tale of British heroism it omits all the complicating factors, and in that way serves the “mythical purpose” of encouraging Brits to be those heroes in a way that emphasising the help of French disorganisation and helpful ground conditions does not. 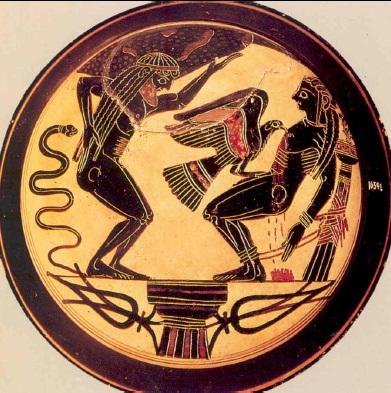 In many cases, historicity simply isn’t relevant to myth, which is where the idea that “myth” means “lies” comes from. I’ve argued before that the Prometheus myth of fire stolen from the gods, in antiquity just one minor tale about “the way the world is”, became at the Renaissance a foundation myth of the ideal of human autonomy that governed the Enlightenment and still has power today. The fact that its events are entirely fabulous doesn’t affect its power. It does not even matter that it isn’t regularly trotted out and taught to budding atheists and democrats (though it recurs in literature and academia enough to tell one its significance is known to thinkers). The fact is that when one reads it within the dominant paradigm of libertarian free will, it resonates with ones gut feelings: Prometheus is a good and wise guy, and unfairly punished for it, whereas Zeus is a mean old obscurantist. Stubborn pursuit of ones own truth truly is better than tradition and submission to authority. The scientist must stand alone for truth against religion, and so on.

At the other end of the scale, a myth can be incontrovertibly true. Two relatively recent events remembered from World War II closely reflect the Agincourt myth. One is the Great Escape, whose message of plucky escape from impossible situations serves modern sports fans very well as a mythic motif, as England is regularly facing impossible odds after fluffing the early stages of international sports competitions. Fans in stadia are always to be heard singing the theme from the film. This use is mythic, yet the event, and the moral attitudes it represents, are entirely true.

The second example is the Battle of Britain, which to people here in Britain is like Agincourt, only without the ambiguities. Its regular recollection annoys our European allies no end – especially the Germans, of course. Yet it is true, and was just as significant as it is remembered to be. I myself met pilots who took part in it and were surely true heroes, and my father, himself in the RAF as ground crew at the time, was no less in awe of the significance and valour of the events and the people involved.

Remarkably, the mythic status of the Battle of Britain was perceived by Churchill even as it began:

And he understood that myth’s human aspect well before it was won:

Naturally there are back-stories in the history that would detract from the mythic retelling: there were individual accounts of cowardice and strategic and tactical errors up the command chain, not to mention factors in Britain’s favour that weaken the main point of the story as myth (like that of fighting on island home ground in Churchill’s speech). Yet it is still within living memory, its essential facts are true, and its importance to the progress of world history hard to deny.

But I’ve been interested to see even in my own lifetime (I was born just 12 years after it happened) how the myth has been tidied up and reinforced. For example, the present generation assumes that the Supermarine Spitfire was the aircraft that won the battle, whereas in my youth the emphasis was as much on the Hawker Hurricane, of which there were, in fact, twice as many. But even back then, the role of other fighters like Blenheims and Beaufighters had faded from memory. Simplification, I suppose, especially by focusing on one beautiful aircraft, supports the mythic purpose even when it does injustice to those who fought and died in other types. Mythically speaking, though, it sharpens, rather than distorts, the truth.

This brings me to the biblical stories that can legitimately be termed “myths”, in the strictly functional sense I’ve outlined. I’m not sure that the creation story of Genesis 1 is properly termed “myth” at all, for it’s only paradigmatic in the sense of describing the spiritual cosmography (the cosmic temple) which governs the Bible’s interpretation of what the universe “is” throughout. It’s actually a literal, if a literary, account of the creation – it’s just that its literal meaning is expressed in a functional, theological way rather than a modern materialist one. It’s true in the same sense now as it was to Moses, simply because God’s universe remains in existence, and it is still essential for our understanding of biblical events like the ascension or, very importantly, the nature of the new creation in, say, Revelation (because we will live there one day).

But the Eden story certainly is mythic, in that it accounts for the existence of evil in the world, and so are the Exodus, for it defines what it means to be Israelite, and the Passion of the Lord, because it defines the Kingdom of God. In all three of these cases, though, the issue of essential historicity is central (as in the significance of the Battle of Britain) rather than irrelevant (as in the Prometheus myth or the Battle of Agincourt).

If an act of disobedience to God did not bring sin and death into the human world, then the explanation for both is entirely different – something like evolution through a less-than-good creation set off by a Deistic God.  And the solution is not then a return to what God first intended, but an abandonment of creation and man’s rescue from it, perhaps by being freed from the “selfishness” of evolution, and given a new-fangled endowment of eternal life. In that case, the story of Adam and Eve, whether its genre were taken to be “historical” or “mythic”, would in any case be a flat lie.

Likewise, if God did not rescue Israel from Egypt, there is no historical saving act of God to ground the Covenant which is Israel’s reason for existing, the foundation of their witness, and their basis of hope (including the hope they had of a coming Messiah when they heard Jesus speak). And in just the same manner, if Jesus did not come in the flesh, and was not raised from the dead, the whole basis of Christian existence, ministry and hope is demolished, to be replaced (as by those like Bultmann in the last century and too many  now) with a gnostic, immaterial view of God, Christ, faith and hope.

In summary, all human beings need myths and invariably base their world views upon them. It’s amusing to work out the prevailing myths of our culture, or even in our sub-culture. Some myths are purely utilitarian, and in that case their historical basis doesn’t matter. However, whether they are true or false historically, they can still be lies in terms of myth, as I believe the Prometheus myth to be the devil’s lie.

Some myths, however, depend for their power on being grounded in the actual events they portray – they need to be true myths, in other words. We may recognise, in their literary form, “mythic elements” intended to clarify their message and aid their impact, but we cannot de-historicize them without losing their power to tell truth about the world.

I contend that the key stories of God’s true salvation history, such as the Fall, the Exodus and the crucifixion, resurrection and glorification of the Lord Jesus Christ, are examples of such “true myths.” We relativise them at our peril. 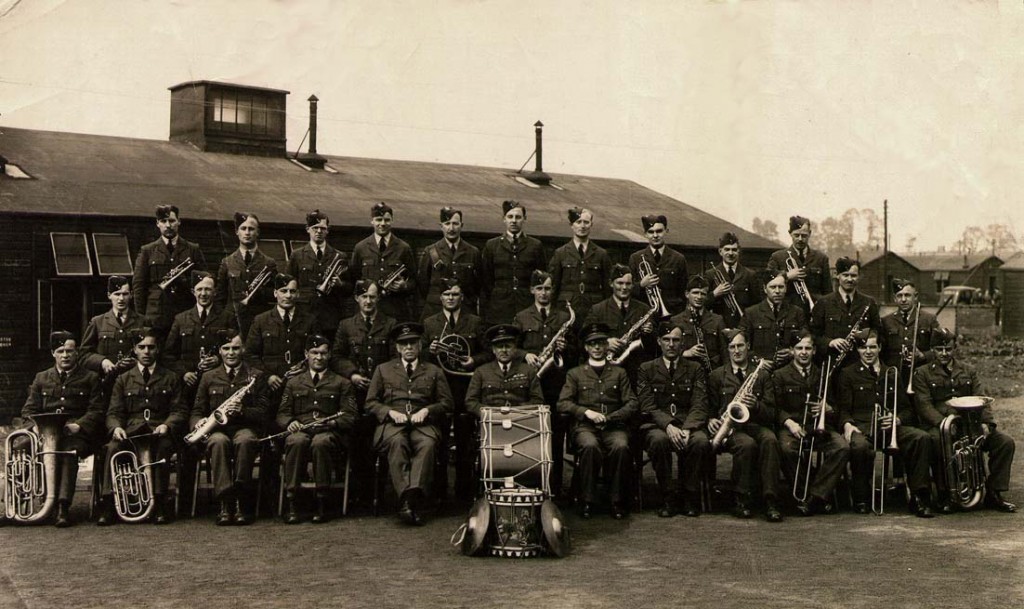