I’ve spent the last five years or more, essentially full-time, researching matters centred on the Christian doctrine of creation. That’s actually as long as I spent getting a Cambridge degree to practise medicine, and just as intense, only without the vacations. The social life is rubbish, too.

It’s a huge subject once you consider the ramifciations in science, theology, philosophy, sociology, ecology, etc, etc. Unlike a medical qualification, a blog doesn’t lead to a career, but I persist because the doctrine of creation is central to Christian faith, and according to the Bible (Gen3.1ff, Rom 1.18ff) is one of the main areas where error leads to perdition.

One thousand hits a day here on The Hump suggests the work is of value to some people, even though most of you stay pretty quiet. But this week I’ve been amazed to realise it would be just as possible to spend that much time on discovering the relevance to the modern modern world of the belief that the earth is, after all, flat. 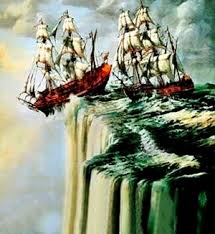 Most older people nowadays vaguely remember from school that back in the Olden Days the Church taught that the world is flat and that ships would sail off the edge, until Christopher Copernicus, or maybe it was Galileo Magellilei, sailed round it and proved it was round, resulting in being tortured to death by the Inquisition.

Those in the loop (and even an increasing number of kids now, thank the Lord) realise that the properly-recalled version of that was shown to be a 19th century myth (started by Irving and more malevolently perpetuated by Dickson and White) some fifty years ago. The more perceptive wonder why, in that case, it’s still in school textbooks even now.

The answer to the last question can be partly inferred from exploring the Wikipedia entry on “Flat Earth“. I went there after someone at BioLogos tried to show that many Christians in earlier centuries believed in a flat earth, and that they based it on a literal interpretation of the Bible. He included three quotes (that didn’t actually support the point), which minimnal research showed he’d cut and pasted directly from Wikipedia, or maybe from one of the other dozen or so skeptical sites that had cut and pasted the the same text block.

The only vaguely relevant quote was from the 17th century scientist Robert Hooke, whose original text I found, in facsimile, online. This showed that the Wikipedia editor had judiciously pruned the passage to hide the fact that, rather than being, as purported, a lament that many simple folk still believed the earth was flat, it was in fact an acid jibe (typical for Hooke, it appears) against his intellectual opponents in astronomy, maths and philosophy who, like flat-earth simpletons, accepted Tycho Brahae’s sophisticated geocentric model rather than that of Copernicus, which Hooke has set out to prove.

Intrigued by such blatant manipulation in what is supposed to be a reliable encyclopaedia, I went to the editors’ discussion page, whose long wrangling is an eye-opener indeed, given what ought to be the historical simplicity of the subject matter.

In broad terms, on that page an erudite and reasonable group of people, whose own names, credentials and beliefs are laid out in their profiles, are continually seeking to correct sweeping partisan edits by a group of clearly “skeptical-atheist” editors with an extremely blunt axe to grind. The latter all work under pseudonyms, and all have closed profiles (why does Wikipedia allow any of its editors to be anonymous and academically untraceable?).

The to-and-fro discussion shows why much of the final text seems so stilted and contradictory. For example, the lack of persuasiveness of the other two quotes in the block pasted at BioLogos arises because a claim that mediaeval literature was full of flat-earth cosmology dies the death of a thousand qualifications. These were low-grade non-historical romances, their references to the earth are ambiguous as to whether it is circular or spherical, they are written by the unlearned… clearly the passage proves nothing, but somebody refused to let it be removed completely.

Likewise, a sentence about Columbus and Magellan that looks as if it was inserted to counteract the modern “demythification” ends up lamely saying that their voyages finally gave practical proof of the earth’s roundness. As if that were needed after 1900 years of its being common knowledge.

One lengthy spat is over a quote by an esteemed Augustine scholar, the late Leo Ferrari, who claimed late in his career that Augustine was a flat earther. The discussion shows this was originally inserted as a “basic authority” on Augustine’s beliefs, only to be supplemented and edited to the effect that Ferrari’s view is novel, and that it is rejected by subsequent scholarship. The net result (apart from being a dog’s breakfast) is to give the impression that the matter is a huge controversy in Augustinian studies, rather than one cranky opinion…

…the crankiness being discovered as soon as one Googles “Leo Ferrari” and finds that he founded the Canadian Flat Earth Society as an intellectual joke, and argued in every public way for it, including at least one tongue-in-cheek academic paper putting sexism down to belief in the spherical earth.

All this is discussed, with no little heat, in the “talk” page, but the skeptics willfully refuse to admit that such a source might not be the most reliable in such a general encyclopaedia entry. So it’s still there.

Meanwhile, one could spend many happy hours online exploring how genuine flat earthers have constructed conspiracy theories about Leo Ferrari being in the pay of NASA to discredit their movement and delude the public. As I hinted at the start, there’s a degree’s worth of research to do on the 21st century sociology of flat earth cosmology – who’d have thought it, now that it’s been more or less eradicated from the middle ages?

Further down the “talk” page is another interesting exchange, this time about Jeffrey Burton Russell’s scholarly exposure of the “flat earth myth.” Originally, it seems, quotes from his his work were sourced from a website familiar to many of us here – the ASA. An anonymous skeptical editor erased both the source and the citation on the grounds that the ASA is “an Intelligent Design Organisation”.

It’s not, of course (if anything a majority of its members favour theistic evolution), and if it were it would be irrelevant to an article on flat earth cosmology, and if it were relevant it wouldn’t justify erasing an academic citation as well as the link. The editor’s teeth were finally drawn only by another editor linking the quote to a less “creationist” website than the American Scientific Afflilation. But doesn’t it strike you as an odd way to write the world’s most consulted encyclopaedia?

All told, you’d have thought from reading the Wikipedia page that the idea of a flat earth is just as controversial nowadays as the Gnus claim it was in Galileo’s time, and in Augustine’s time, and every other damned time back to the mythical flat earth of Genesis. Even the debunking of the myth is made to look like Fundamentalist propaganda .

In one sense it is controversial, because Wikipedia‘s back parlour reveals something of why it is that other scientific myths like those about Newton and his “God of the Gaps” , Galileo’s persecution by a geocentric Church (which somehow forgot it believed in a flat earth, not a Ptolemaic sphere!) and the amnesia about Alfred Russel Wallace‘s belief  in guided evolution still appear in encyclopaedia articles, science documentaries and – to our shame – in children’s textbooks.

It is not forgetfulness, but deliberate intention to deceive. And I resent it, not least because it polluted my inquisitive mind as a child. I can well remember, at the age of six, my Golden Play Book explaining how everybody believed the world was flat in the middle ages, and it even had a line drawing of a ship with a cross on the sail going over the edge, to colour in. That was my first exposure to the name “Christopher Columbus”, and I’ve had to unlearn that, and a host of other science myths painted on my unformed mind in childhood, as I’ve grown older. It’s no wonder people can’t distinguish conspiracies from conspiracy theories when they’ve been so comprehensively lied to in the name of science and history.

In contrast, consider the “white lies” I was told in Sunday School. I remember being told (in passing, I have to say) that God lights the little candles at night we call “stars”. With all the astronomical knowledge to be gleaned from The Boy’s Book of Astronomy I argued with the teacher (Mr Sutton was his name) – and he immediately backed down and said it was a simplified idea he’d made up for children (well, it didn’t come from anything in the Bible, did it?).

But just try to get a skeptic to back down to an adult, in the face of primary sources, over the flat earth myth. Not only will they insist they’re right until they withdraw from the conflict – they’ll go and write a school textbook for your kids.

In parting, here’s some more home truth about Wikipedia.