The muzak of heaven

The discussion board at BioLogos is much more “lively” than it was a while ago, which I suppose is a good thing. Sadly that largely means that in any thread one encounters a complete smörgåsbord of religious opinion from Deism at one end to any number of special revelations about the real meaning of Scripture, the world and everything at the other. If the project is to create a current of integration for science and faith, then the more likely result is a maelstrom that drowns many and goes nowhere.

If there was such a free for all on the science side, it would be pretty dire, but somehow that aspect of things has a much clearer pattern of orthodoxy correcting error. I remain to be convinced that the marketplace for the best ideas on a theology of nature should be a Five and Dime Store.

I suppose the most frustrating thing for me is seeing exactly the same facile and superficial speculations about God’s creativity and actions in nature (not to mention human affairs) that I’ve been exposing for five years there as not only blatantly unscriptural but logically incoherent. How long must we put up with the sophomore stuff? Here’s another treatment from a slightly different angle.

One commenter on a thread started by Sy Garte, reacting to a suspicion that the dreaded “Calvinism” was held by some there, couldn’t see why God would not enjoy being surprised by whatever an open and random system of nature turned up. On reflection the picture of God being presented there is, essentially, of a distant Deist God with time on his hands, who needs entertainment. If the creation really has not been given purposeful direction by this God, then it’s as if he’s lying back smoking a sabbath cigar and listening to what is, in effect, mindless muzak. Worse still, he’s enjoying it.

Or perhaps a more graphic picture is of a rather stoned sixties hippy gazing at a lava lamp and, from time to time, seeing patterns that resemble something meaningful like a human face and rejoicing greatly. The God of pareidolia, in other words. The tripped-out God.

But, the reply may come, I didn’t mean to say that creation is completely random: God has built into it some purposeful laws as well as “openness” and “freedom”, so that the lava lamp is probabilistically likely to produce genuine patterns that mean something, though these are still a surprise and a delight to the watching God. If that’s so, he can dispense with his pharmacologically enhanced perception: the lamp will turn up real things.

This second picture, though, needs to be examined for the anthropomorphisms that distort it. To an entranced hippy, a lava lamp may be a completely inexplicable wonder. To its designer it’s less so, because he knows the physical principles that make the wax melt and convect when it’s heated, and sink as it cools.

But even to the designer of a lava lamp, the actual patterns of convection displayed are, within limits, random. And that’s because he is merely harnessing some physical laws he didn’t create to operate the artifact he did create. Those laws were actually created by God – who, in our analogy is the hippy being bedazzled by the surprises the completed lamp turns up.

But if God created the laws, the matter, the lamp – and, most importantly the probability functions that are supposed to be the source of the surprises which cause him to chuckle – then he could only be surprised if he’d chosen to forget the principles he created in the first place. God does not confront any random numbers in the world that he didn’t first – as sole creator and sustainer of all things – generate himself. Or is there some other Creator, too?

So one is, ultimately, suggesting that God can surprise himself. Or to use a homely but closely fitting analogy, one is suggesting that he can tickle himself, for tickling depends on experiencing a stimulus that does not originate within yourself. But we believe God is the source of all things, if we’re monotheists.

There is, in fact, one class of people who, it is said can tickle themselves. And that is schizophrenics. So our more refined second model replaces the tripped-out God of pareidolia with the schizophrenic God who tickles his own fancy. 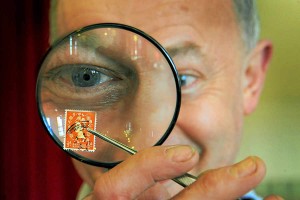 I suppose I should, for completeness, mention the antithesis of the “hippy” God, in the form of the “conservative” God, sitting upright in a hard chair and wearing a suit, whose “entertainment” doesn’t include watching lava lamps at all, but doing some rigid and pre-arranged activity from a checklist – or, as the guy in BioLogos put it, “reading from a script”. But I won’t say much about him because I’ve never met anyone who believed in him, and find it to be merely a rhetorical invention of those who like their God to be more laid-back and let lava lamps do their thing (Man).

So I say that the Christian God is neither tripped out, schizophrenic or “straight”. He is God, not man. As such, the very model of God as a spectator sitting back and enjoying (or even being brought down by) the unfolding events of the creation is intrinsically wrong, not to mention idolatrous. The God of Israel is the one who acts dynamically, in all he does, and he acts to express maximally his power, his wisdom, his justice, his holiness and his love. That is, specifically, how he creates, and it’s hard to formulate how the dictates of power, wisdom justice, holiness or love are served by sitting light to purpose in his creation.

For if God does not give things their individual and collective purposes, whence will any purposes whatsoever arise? If God had not created matter, then creation would obviously be an illusion at best. Likewise if he doesn’t create purpose, then creation is, at best, a sequence of pareidolia, of mere appearances of purpose – faces in the clouds, or psychedelia in the lava lamp.

Furthermore, consider how he creates, according to all but the most attenuated theology. Yes, he makes things in their order, including the making of their own specific powers (such as the powers of reproduction, or the powers of choice from the ability of the trilobite to choose its prey to the moral accountability of mankind). But he also sustains those things in being – and not only those things, but those powers and their operations. This is the intimate Father God who knits us together in the womb, who finds prey for the young lions, and who knows our thoughts from afar, and the end from the beginning. If we believe what Scripture teaches, that is.

If he’s so intimately involved with, and concerned for, all things in creation (from the sparrow’s fall to the individual hairs on believers’ heads), then where do the surprises come from? How can such a radically dependent creation tickle God? That’s not Calvinism – it’s the God of Jesus and the God the Bible, which seems sadly to be pretty much a closed book to many of those speculating so freely about the origins question.

2 Responses to The muzak of heaven