The non-presentation of self in everyday life

The title of this piece is based on a once influential social psychology book by Erving Goffman, The Presentation of Self in Everyday Life. In around 250 pages, the author fully covers the ground of his subject, just like it says on the cover, writing (as one reviewer said) not only about

Vogue models, clergymen and the dead, but also about Shetland crofters, Canadian Army dentists, dukes, beauticians, rajahs and a range of characters.

I still remember the seminars I did on the book during my social psychology studies in Cambridge. But one area is notably absent from Goffman’s analysis of the self, and that is the entire non-human world. Given how much emphasis is often placed on the selfishness of the entire process of evolution that brought us into being, that might be seen as a surprising omission. Yet its absence is inevitable and correct, when one remembers that the concept of “self” is an entirely human, even a social human, one. The self, and selfishness, fit neatly into the field of social psychology, but stop making much sense outside it. To speak of other animals as possessing a self is contentious. To speak of plants or bacteria or viruses possessing one is absurd. And to speak of an inanimate process like evolution being selfish is simply incoherent.

Let’s look for that selfishness in our closest relatives on the evolutionary tree. As experimental psychologists David and Ann Premack write in their study of human intelligence:

Although a chimpanzee passes the mirror test [touching its own face when viewing itself in a mirror], there is no evidence that it engages in either self- or social approval.

The concept of self presupposes causal reasoning, the ability to reason: “Men pay attention to me because I am attractive.” As we have seen, this kind of reasoning is not available to the chimpanzee. 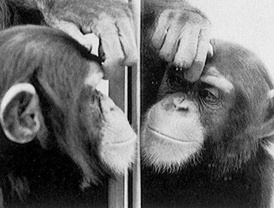 The chimpanzee, then, does not possess a self that could enable it to be selfish. The writers are confirming experimentally only what every thinking person has known for millennia – that there is a vast gulf fixed between us and the animals. If there is only a small difference between our genome and the chimpanzee’s (1.6% is the figure the Premacks use) it tells us not that we’ve been wrong about the gulf, but that coding DNA is not the place to look for an explanation.

If “self” is an inappropriate term when applied even to our nearest relative, how much more so when applied to a natural process of evolution of which its objects – unself-conscious organisms from bacteria to baboons – are completely unaware?

Yet the idea is as old as Darwin – or rather Malthus, whose work gave him the idea – that evolution is an entirely selfish process of struggling to survive, whether one views the selfish agent as the organism, falling over itself and treading on everything else in order to reproduce, or as Richard Dawkins’s “selfish genes”, cynically puppeteering our bodies and minds to reproduce themselves at our expense.

The reasons it matters, outside of science, are legion. The “struggle for survival” directly justified Eugenic Theory, two World Wars and the Holocaust. It is held up as a natural law in economics and commerce. Firms (even government ministries like DEFRA, I’m told) automatically fail the lowest 30% (or whatever) of their staff appraisals because the struggle to survive is seen as fundamental to success. Accepted comprehensively, it nullifies the very existence of all that is human, by subordinating all human values to varieties of evolutionary self-promotion. And specifically it fundamentally undermines the Christian teaching that Creation is good, leading amongst other things to an evolutionary theology in which creation means very little:

This is expressed by Karl Giberson in a recent book:

Selfishness, in fact, drives the evolutionary process. Unselfish creatures died, and their unselfish genes perished with them. Selfish creatures, who attended to their own needs for food, power, and sex, flourished and passed on these genes to their offspring. After many generations selfishness was so fully programmed in our genomes that it was a significant part of what we now call human nature.

But Darwin’s “struggle for existence” was never anything more than a colourful metaphor for what, when expressed in more sober and accurate scientific terminology, is simply “differential reproduction.” His “competitive warfare” model was very much a product of his English socio-political background, though it has far outlived Victorian social inequalities and colonial empire-building.

It is not, in fact, selfish to attend to ones needs for food or sex. A plant or animal not doing so is not being selfless, but dead. “Power” is rather more dubious a concept biologically – an instinct to fight is not at all the same thing as the human will to power, besides being anything but a universal trait in nature.

But let’s give a not untypical example of how the “struggle for life” might play out in a real, adaptive, situation. Imagine a very docile, even community-spirited, small rodent whose life is marked by co-operative food-gathering activities and which mates for life in an uncompetitive way, the sexes being pretty equal in numbers. Unfortunately, their main predator is a small weasel that can get into their burrows. Or into most of them – smaller rodents with smaller burrows are not easily reached by weasels, especially once the latter have got fat by eating the bigger rodents. Accordingly, the smaller rodents, though identical in behaviour to the bigger ones, will nevertheless tend to contribute more to the gene pool, leading over time to the evolution of a smaller variety.

Just who is being selfish here? Is it selfish to be slim? Alternatively, if instead we take a large and colourful bird with an elaborate courtship ritual, the more demonstrative variants of which get the girl, then what is being selected for is creativity, not selfishness. All the birds dance their hearts out with the same gusto – some are just born more beautiful.

When I was working in a pest control laboratory, captured wild rabbits were used (sadly for them fatally) in the research. Most of them, when their cage was approached, would tear round and round making shrill cries – except for one, which presumably because of some rare genetic variation would come amicably to the door of his cage and put his paw up to be stroked. The animal keepers refused point blank to allow the researchers to take him away. Friendliness was an absolute selective advantage in that situation over self-defence. There can be no universal principle that is guaranteed to provide evolutionary advantage – especially a pseudo-moral quality like “selfishness” in creatures without selves. 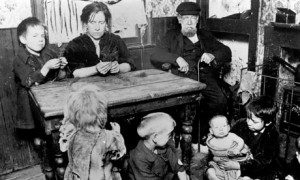 The trigger to Darwin’s idea of the struggle for life was, as I have already noted, the work of Thomas Malthus on human populations , in which the same idea, that high rates of reproduction amongst the poor inevitably outstrip resources and so lead to differential survival, was the central thesis. He wrote at a time when the Industrial Revolution was producing unprecedented levels of abject poverty, and it was certainly true (metaphorically) to say that life, for millions, was a life and death struggle.

But was it a selfish struggle? There’s no doubt that dehumanising conditions often lead to dehumanised behaviour – criminality, wife battering, child abuse and so on. But even in such cases, sheer desperation rather than selfishness might be more to blame: drowning hopelessness in gin-soaked oblivion does nothing to aid survival. And as sympathetic and observant writers like Charles Dickens were at pains to point out, poverty was as likely to lead to acts of self-sacrifice actually aiding survival, or to examples of thrift or enterprise improving the lot both of the subject and of others.

As in Darwinian evolution, survival (and therefore offspring) came by many different means that happened to work to resolve the “struggle”. Selfishness might be involved in some of those means, but by no means inevitably – the co-operative, temperance and trades union movements, born out of those times, were its very antithesis. The fundamental difference from evolution is that humans exercised choices, for good or ill, and those choices were based on some kind of moral, or immoral, motivation.

All Darwinian evolution, on the other hand, is entirely divorced from any motivations at all, other than those common to all life – to eat if hungry, for example. (Though it is looking increasingly likely that teleology – that is, intention – is very much a factor in real evolution.) One is born with some pattern of variations, and it may or may not result in ones breeding somewhat better and so contributing more to the gene pool.

That even applies to human evolution. It is well known, for example, that genes for lactose tolerance, once uncommon, have been gradually spreading through the human race since dairy farming was invented. You feed your kids milk, and some get sickness and diarrhoea from it. That usually only matters much if times are hard and there is nothing else for the children to eat, but it affects reproductive success, probably through simple survival to adulthood in those hard times. But anyone who says that selfishness has anything to do with it at all is crazy – being able to drink milk does not make you selfish. Nobody was even aware that the evolution of lactose tolerance was going on, for several thousand years.

And if it’s the most selfish people who drink milk, we seem to have got our social stereotypes a bit mixed up. 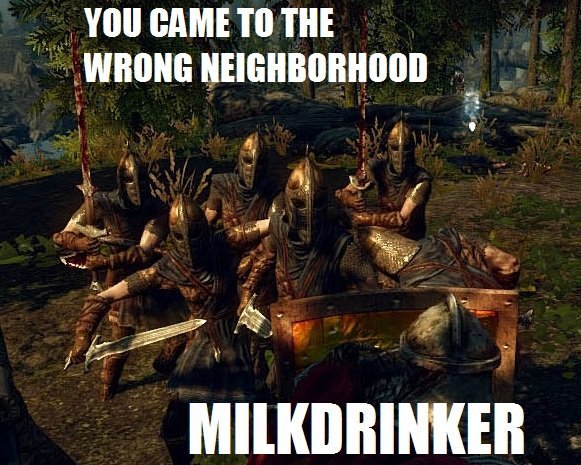 2 Responses to The non-presentation of self in everyday life