In my last post I suggested that failure to deal adequately with the implications of monotheism itself leads directly to many erroneous ideas in both theology as such and in understanding the relationship of God to creation, including evolution.

I used the analogy of God as author to show how one should see God as not “a Being within reality”, but the being whose reality – himself – creates our entirely different, subordinate reality. That is why it is possible for God’s will to lie behind everything – including what we will – without reducing us to automata. I also spoke of the shortcomings of that analogy, in that an author can only appear to interact with his characters by writing himself as a character in their reality. Whilst that has intriguing possibilities for understanding more of revelation and the Incarnation, it suggests that it is not possible to have real relationship with God, and in that the analogy is false.

The logic of the author metaphor has been understood before: I was reading today how C S Lewis, before becoming a theist and then a Christian, tried to have his cake and eat it, once he realised the emptiness of materialism, by following a popular fad for “The Absolute”, which was, as it were, God without the personhood (and the consequent demands upon our own lives). These intellectuals argued that God could no more relate to us than an author could to his own created characters. They were clearly wrong (and “The Absolute” in that form has now disappeared into the abyss of damned philosophical demons). But it’s not immediately obvious why it’s wrong. I suggest it may be because we don’t understand the difference between God’s creation and authorship any more than we do that between creation and artisanship.

Coincidentally (I do love the synchronicity that pervades life) I recently saw the film Hugo when my daughter brought us the DVD to watch. Never knowingly in touch with cultural fashion, I’d never even heard of the film, though it’s five years old. A charming fantasy, the plot nevertheless touches base in the reality of the life of the early film-maker Georges Méliès, but the real star is a broken automaton supposedly made by him (Méliès certainly did make automata) but actually based on that made around 1800 by the Swiss clockmaker Henri Maillardet in London. That story  is at least as fascinating as that of the film, for when delivered in fire-damaged pieces to The Franklin Institute in 1928, the automaton was attributed to Johann Maelzel, who genuinely invented the metronome and fraudulently invented a chess-machine. Only when painstakingly reconstructed and able to perform its repertoire of four intricate drawings and three poems did the final poem of the automaton reveal the name of its actual maker, Maillardet.

If you’re unfamiliar with the machine, you really should check out this clip.

For our purposes, the interesting thing is that the eighteenth century obsession with automata was more than a fad for intricate mechanisms: it had a serious philosophical basis in the belief that physical reality was, with the possible exception of the human soul, no more than a mechanism. This analysis of the reason for the prevalence of automata appears to be widely accepted, and is attributed in large parte to Descartes. As Wikipedia‘s article on automata puts it:

A new attitude towards automata is to be found in Descartes when he suggested that the bodies of animals are nothing more than complex machines – the bones, muscles and organs could be replaced with cogs, pistons and cams. Thus mechanism became the standard to which Nature and the organism was compared…

The world’s first successfully-built biomechanical automaton is considered to be The Flute Player, invented by the French engineer Jacques de Vaucanson in 1737. He also constructed the Digesting Duck, a mechanical duck that gave the false illusion of eating and defecating, seeming to endorse Cartesian ideas that animals are no more than machines of flesh.

In his Treatise on Man, Descartes wrote:

To Descartes, only the immaterial soul of man was excepted from this mechanistic – even clockwork – conception. The ability of man to perform a whole range of tasks (rather than the automaton’s restricted range, even if in these it might out-perform a human) and to use the gift of language in solving unfamiliar problems was all that enabled one to distinguish a person from a machine – much the same as in today’s Turing Test.

But the attempts to make machines to beat the Turing test are only one aspect of the evidence that Descartes’ mechanistic philosophy is still alive and well, and more pervasive than ever in an academic world that largely rejects the human soul’s existence. Artificial Intelligence aside, the reduction of living things to mere collections of molecular machines is a trap into which not only mainstream biology, but even Intelligent Design (following the general scheme of William Paley), has tended to fall.

There is, if you’ll bear with me, a parallel between this mechanistic view of nature and the theological problem people have with a sovereign God, above and beyond the pervasive metaphor of true “free will” as the antithesis of being created “robots”. Both draw too close an analogy between the work of artifice and the act of creation. Whether one is an atheist seeing natural selection as nature’s Henri Maillardet, honing the biological machines of the cell, or a believer seeing the same mechanisms as God’s direct or indirect work, one is still, perhaps, failing to see that the two kinds of making – artificing and creation are fundamentally different in their results as well as, or more than, their means.

Scripture does, of course, represent God as a workman, laying the foundations of the earth, knitting the foetus together in the womb, and so on – that is the closest, perhaps the only, analogy we have to creation. Likewise, even before Descartes it was obvious that legs act as mechanical levers for walking: the machine analogy has indeed some validity in the biological world, as Paley rightly perceieved and demonstrated long before James Shapiro’s natural genetic engineering or discovery of the flagellar motor or algorithmic processing in cells..

But in the end, to be a created organism is much more than to be a set of molecular machines individually put together by evolution, like the machinist at the Franklin Institute who rebuilt Maillardet’s drawing boy. That’s the true weakness of the genetic model, which is thoroughly Cartesian in its conception. Creation is not just a method of manufacturing artifacts – it is an alternative activity, resulting in a qualitatively different result – an integrated being, which Maillardet’s boy, despite the poignancy he excites, can never be. He is an automaton – and even the lowliest animal is not.

This, it appears to me, is Descartes’ biggest mistake – not in attributing rationality only to an implanted eternal soul (quite different from the biblical conception in any case), but in failing to see that both human reason and living bodies are finally non-mechanical because created by God. And so God could certainly create through evolution, as he creates people though natural generation – but he could not create by evolution, if that is conceived as an essentially mechanical or chemical process. Creation transcends mechanics.

And so to the parallel with human choice. The question of how God can be sovereign over our “real” choices without making us robots is answered not by elevating free-will to an unbiblical autonomy, but by a greater understanding that we are created beings, not manufactured robots, and so the relationship between maker and made is of a quite different order. It may be a tricky concept to understand, but is not that much more difficult than perceiving that our bodies are “real” in a way that an automaton’s is not, even though, in Christian understanding, they are sustained in existence moment by moment only by God’s active will (even the weakest Christian position, “mere conservationism”, believes that). And even though, unlike the automaton, we cannot be put together again from fire-damaged parts by clever mechanics after two centuries, we have a kind of reality that it does not, even in principle.

We need to recover the wonder of knowing how different is is to be a creation of the living God, rather than one of Descartes’ clockwork automata – and that applies to trees and dogs, as well as sons of Adam. 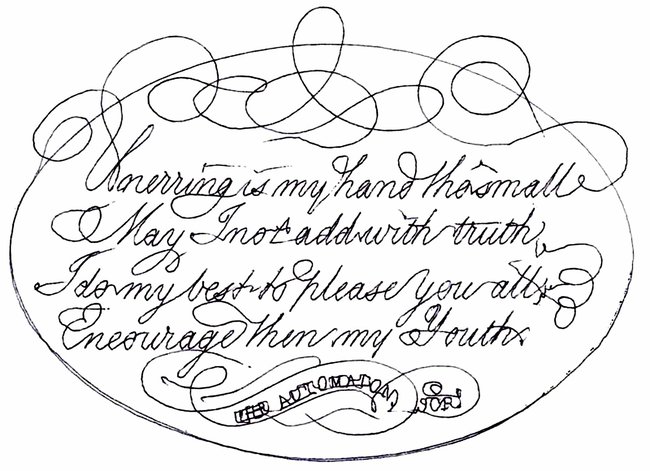 When the character is the writer…

65 Responses to Monotheism and automata