Job on the job of creation

In the early days of Internet for the masses I wrote a website for my church at the time, including transcripts of sermon series. One day I discovered Google Translate, and thought what fun it would be to see my sermon on Job in French. The algorithm, bless its heart, translated “Job” as “métier” throughout. That’s irrelevant to this continuation of the series on the Bible’s treatment of Genesis 1, but a bit of humour helps get the Job done.

I’ve already commented on Elihu’s speech in ch37, with its clear reference not only to clouds as the waters above the heavens, but to a surprising understanding of the hydrological cycle. I also argued that the reference to the heavens being like a bronze mirror is about a particular middle-eastern weather pattern, not the creation of a solid firmament. The connections to Genesis 1 are somewhat limited in that passage.

I notice the same “sitting loose” to Genesis in the theophany of Job 38, compared to the passages in Psalms or Proverbs. In order to suggest possible reasons for this, I’ll turn first to another “Creation” passage, in Job’s own speech of ch26.

In this passage Job says some odd things that on close examination appear derived from Canaanite myths of the Baal Cycle. Most obvious is v12ff, describing God’s cutting Rahab the sea monster in pieces and piercing the gliding serpent. Although liberal scholars have seen this myth alluded to in the division of the waters in Genesis 1 (via the slaying of Tiamat in the Babylonian Enuma Elish), there really is no literary connection there, as the assyriologist Wilfred Lambert demonstrated.

The sea-monster Rahab is certainly also referred to in Psalm 89, but there (and elsewhere) the story is applied figuratively to the parting of the Red Sea and the defeat of Egypt, pejoratively nicknamed “Rahab”. So the tale was known in Israel, but why should Job apply it to creation?

The plot thickens when NIV’s cryptic “he stretches out the north over empty space” (26.7) is realised to refer to Mount Zaphon, the site of Baal’s palace in the myth (or in other ANE cults the home of all the gods), being spread above the world’s tohu (the word in Gen 1.2 meaning “disorder” rather than “non-existence”).

Incidentally, I suggest that the next clause, “he hangs the earth without anything”, also originally had some now lost mythological referent, because it fits no candidate “cosmology”, be it the Genesis creation (in which the earth is the basal foundation), the Victorian “goldfish-bowl” ANE cosmology (in which the earth floats in water) or the modern cosmology, in which the earth orbits the sun in the Einsteinian space-time continuum. The world does not, in any of those views, “hang from nothing”. Tempting as it is, we must avoid that kind of pseudo-scientific accommodation, especially when it’s only superficially like the modern view.

Why would Job cite such myths so freely? Although nearly everything written about the origin of the book is speculation, I can suggest a few possible reasons. Firstly, as wisdom literature, Job has a cosmopolitan purpose and quite possibly cosmopolitan origins, just as the Book of Proverbs freely uses material from the surrounding nations. It would have suited the genre for at least the core of the book to have originated in a non-Israelite source.

Secondly, such a foreign source is asserted in the book itself, Job being from “the land of Uz”, believed by scholars to be either in Edom or somewhere north of Israel. The final composition of Job is clearly Hebrew and Yahwist, but the original story may have been an “import”; or perhaps familiar foreign elements were deliberately introduced in the way that, say, that most Puritan of poets Milton, filled his work with classical mythological references.

Finally, Job may well (according to some scholars) have been produced in the northern kingdom of the divided Israelite monarchy as early as the 8th century, in which case Samaria’s eclectic theology might at that time have incorporated viewing Zaphon as the seat of Yahweh and his angelic council instead of that of Baal or the pagan pantheon (it appears to be such in one passage in Isaiah, ch14:13). This would be no more odd than the second temple Jewish apocalypses adopting the idea of a hierarchically-layered heaven from the Greeks, or come to that the New Testament using the Greek concept of “Hades” for Hebrew Sheol.

The myth of Rahab too may have been popular in the northern kingdom in its own right as a mythical description of Yahweh’s subduing of disorder.

All this might also help explain why Job 38 is rather different from Genesis. But that’s not a disadvantage: rather it could be useful  by pointing to the general worldview in that region of the ANE which informed Israel’s understanding of the physical world, which is all I’m attempting in this series of posts.

38.4-8 broadly echo Genesis in the creation of the earth (eretz) and Ps 104 in giving it solid foundations. The singing of the morning stars and the joy of the sons of God is a wonderful addition to emphasise love and goodness as the source of creation. Also interesting in this section is the fact that Job (like the rest of mankind then) is ignorant of what the earth’s foundations were laid upon. That shows the question was one that had been considered by Hebrews, but also shows that any belief projected on them – such as that they believed the earth stood in a cosmic ocean – is wrong. At the time of Job’s composition, at least, men were content to remain agnostic about it and leave it to God. 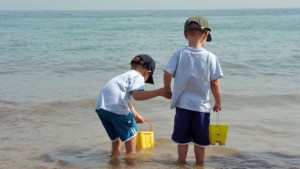 Vv8-11 are reminiscent of the Genesis Day 3 events, with the sea (yam – this is not the primordial water but the named, and so functional, sea) being confined to its proper place. Exactly what is signified by its previously “bursting forth from the womb” is unclear: if it does not refer to some lost myth (“Yam” as a god was an opponent of Baal, an ally of El and a chum of Rahab in Cananaanite myth) it may simply represent the seas as being brought forth by God as an unruly element to be tamed. There is certainly no more mention here, than elsewhere in the Bible, of a cosmic ocean as its origin, or as a persisting entity.

The earth’s topology being stamped like clay under a seal-stone (v14) is another novel poetic image. It’s clearly not to be taken literally, but as a sign of God’s sovereign will over the world.

In V16 – “springs of the sea [yam]” is paralleled with “recesses of the deep [tehom], and then the poem goes on to talk about Sheol. These are all simply “down” in the sea or under the earth’s surface phenomenologically, and can’t be taken to entail connection to some cosmic body of water.

Passing upwards through the “breadth of the earth”, Job’s ignorance of which suggests that the Hebrews were as non-committal about the size and shape of the world as they were about what lay under its foundations, God goes on in vv19ff to talk about the heavens. There is a long passage about the origin of rain/snow etc, and also stars. For our purpose we should note in V34 how “clouds” are paralleled with “a flood of water”, and in v37 how clouds are paralleled with “water jars of heaven” which God, poetically speaking, tips over to make rain. 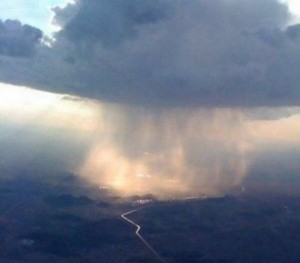 Once more, though there is plentiful reference to water in heaven in clouds, jars, storehouses and so on, there is no mention at all of a boundless deep. This, surely, in conjunction with chs 26 and 37, should render beyond any reasonable doubt that, in the Job worldview, the waters which make rains, snow, dew and frost are in the clouds, and not in some vast ocean above a solid firmament.

Instead, above the clouds are the constellations (vv31-33) which govern the seasons and beautify the heavens according to the rule given them by God. These include “mazzaroth”, which in some way signifies the zodiac with its astronomical/astrological significance, and so may well mean the planets. Certainly we know from Babylonian sources that the planets were known to have “seasons” different from the background of stars: they were decidedly not merely stationary lights hung on the firmament – though neither were they likely to be thought of as physical objects.

That completes my survey of the biblical passages echoing Genesis 1. I think it confirms my phenomenological understanding of the latter, and does absolutely nothing to corroborate the “goldfish-bowl” cosmos beloved of so many nowadays. But you don’t need to corroborate things when everybody who matters knows they’re true anyway! 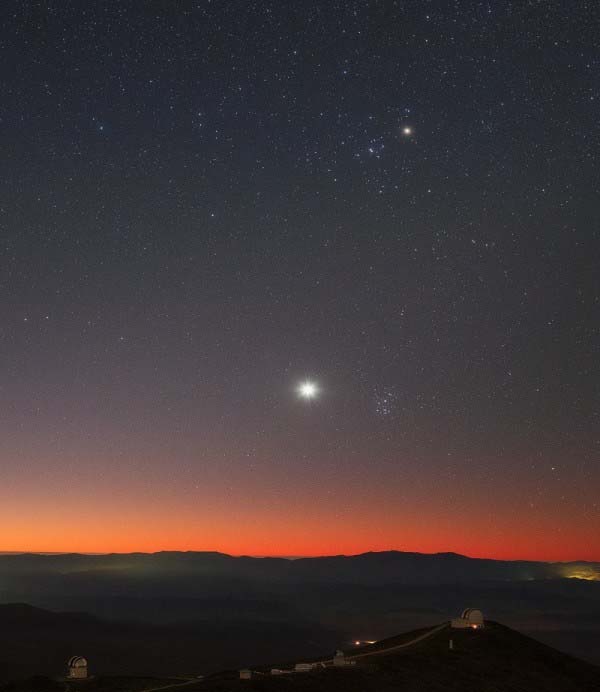 8 Responses to Job on the job of creation