The first chapters of the Book of Proverbs include a paean to the supremacy of wisdom. I’ve already commented, in my recent piece on “the deep”, on the brief passage in Prov. 3:

By wisdom the Lord laid the earth’s foundations, by  understanding he set the heavens in place;
by his knowledge the depths were divided, and the clouds let drop the dew.

The writer takes up this theme again at greater length in ch. 8, in which God’s wisdom is personified as his eternal companion, so that’s it’s not surprising that the passage has been applied to Christ as Logos throughout the history of the Church. That the imagery derives from Genesis is to be expected, because the idea is to say “Remember the creation story? That was actually about me, Wisdom!” It’s a great passage in itself:

22“The Lord brought me forth as the first of his works,
before his deeds of old;
23 I was formed from everlasting,
at the very beginning, when the earth [*eretz*] came to be.
24 When there were no depths [*tehom*], I was given birth,
when there were no springs overflowing with water;
25 before the mountains were settled in place,
before the hills, I was given birth,
26 before he made the earth or its fields
or any of the dust of the earth.
27 I was there when he set the heavens in place,
when he marked out the horizon on the face of the deep,
28 when he established the clouds above
and fixed securely the fountains of the deep,
29 when he gave the sea its boundary
so the waters would not overstep his command,
and when he marked out the foundations of the earth.
30 Then I was constantly at his side.
I was filled with delight day after day,
rejoicing always in his presence,
31 rejoicing in his whole world
and delighting in mankind.”

The first thing I note is that, unlike Genesis, there is some early notion here of a creation ex nihilo by the eternal God. Genesis 1.2 begins with existing water and earth, albeit unformed. But here the meaning appears to be that Wisdom existed even before these, “from everlasting”, whereas the earth and the deep, even in their primordial form, come later at his behest. Also, one should note that earth and water have apparently contemporaneous provenance, as indeed Genesis 1.2 suggests – the ocean did not come first, nor alone.

Then in v27 God sets the heavens in place (the now familiar shemayim, if you’re following the blog, the name of the firmament or raqia) and, in a poetic parallel, suggesting some kind of synonymity, marks out the horizon (chug, meaning a circle or sphere… but not a dome or vault!) on the visible surface of the ocean. A similar idea occurs in Job 22.14:

…he goes about in the circle of the heavens (shemayim),

…he sits enthroned above the circle of the earth (eretz).

The phenomenology involved here, linking the firmament to the horizon, is a little tricky to modern minds. But it at least suggests, as other detractors from the “solid vault” concept of raqia have said, that our understanding of the texts should be built from what we learn looking across at the horizon as a line rather than up at the zenith as a vault. It may be too much to deduce that the heavens are 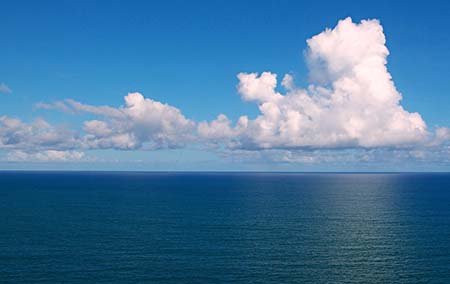 conceived as literally circular – though phenomenologically speaking as an observer turns round and looks at it that may be self-evident – but the fact that both the heavens and the earth are described as “stretched out like a tent” (see previous posts), and both are described in circular terms, would seem to be best interpreted as understanding both earth and sky to be horizontal layers of unspecified depth, as perceived from any point on earth.

If we are not already wedded to the idea of a cosmic ocean, the most obvious sense is that the clouds here themselves signify the waters above the firmament in Genesis. And of course the deep in turn represents the 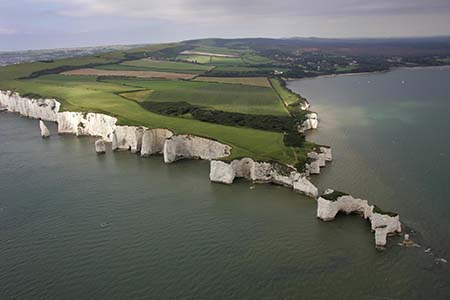 waters below, which once God causes dry land to emerge, are named “seas”. The deep, as v29 makes clear in continuing the sentence, becomes bounded, essentially by the marking out of the “foundations of the earth”. In other words, 28b and 29 are about the deep becoming “seas” (with no residue remaining as a bottomless cosmic ocean) and the dry land becoming “earth”, as described in Day 3 of the Genesis account.

The significance of the phrase “the face of the deep” can easily escape our attention unless we make the comparison with Genesis: the idea that God, in making the firmament, was creating a lacuna in a boundless deep is actually being contradicted here. He was actually marking out the horizon/firmament on the existing surface of the deep – just as Gen 1.2, which twice mentions the surface of the primordial deep, would lead us to expect.

Indeed, it is worth noting that the supposed ancient belief that the world is entirely surrounded by water is entirely absent from this passage. One wonders why that would be since, in the “conventional” cosmology, the seas and the clouds were formed from cosmic ocean, and the earth emerged from it. The reason is quite simple – the cosmic ocean doesn’t appear in Proverbs because it doesn’t appear in Genesis, because it was never a feature of Hebrew belief about the world at all.

One more episode in the is OT survey, and I’m finished!