2016 was a good year for British archaeology, as it became clear that a Neolithic settlement at Ness of Brodgar on the far-flung Orkney Islands (dating to c.3500BC) had been a major “capital” and, in all likelihood, the fountainhead of the “stone circle ” culture that spread south through Britain over a thousand years and culminated in the mighty monuments at Stonehenge, Avebury and elsewhere. 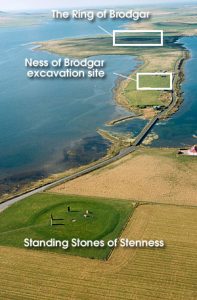 A fascinating mini TV series  with a multidisciplinary team gate-crashed the dig and explored the archaeology and the historical story behind it last summer. In a nice piece of experimental archaeology, for example, a withey-and-hide boat was built which successfully crossed the treacherous currents of the Pentland Firth to the Scottish mainland, showing how our neolithic ancestors could indeed have travelled so widely.

And travel they did, as seems to have been demonstrated by the existence of a unique mammal, the Orkney vole. The zoologist Chris Packham explained how it has no close relatives on the mainland, but that its genetics most closely match a vole species in Belgium, with a divergence compatible with a separation about 5,000 years ago. In other words, they probably came by accident, or as uneaten snacks, with the first settlers – who appear to have bypassed the mainland altogether, from the archaeological evidence. 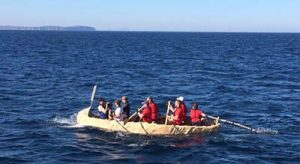 Incidentally voles as a group pose a series of evolutionary riddles, which is a story worth pondering in its own right.

Ness of Brodgar was a cattle culture, and there is evidence there showing that, when the site was apparently ritually abandoned, several hundred cattle – an astonishing number if you consider the exposed barrenness of the Orkneys – were slaughtered for a feast and/or sacrifice. 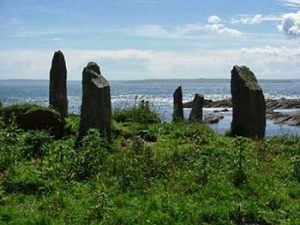 To explore this further (or perhaps just to make an opportune TV moment!), Packham and archaeologist Neil Oliver visited a small island of South Orkney called Swona. Though deserted now, it has a history of occupation reaching back to the neolithic, with its own “parish” stone circle. It supported a population of up to about thirty people, in latter days crofting and, most significant for my purpose, keeping cattle. 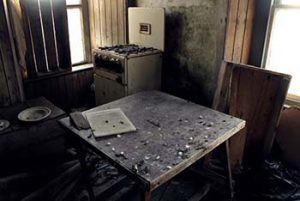 The last couple of inhabitants had to leave for the mainland hurriedly in 1974 when the husband became ill, and the wife realised she would not cope. The TV team camped out in their cottage, still containing its abandoned contents as a poignant time capsule.

The cattle had to be abandoned too when the last inhabitants left, and later attempts to expatriate them proved too dangerous for them, given the poor landing facilities. Accordingly thay have been left almost entirely to themselves, bar rare human visitors, for 42 years. I’m told that corresponds to just eleven generations or so.

Another recent TV programme described the herd as it now is:

The herd has settled to an average of 17 animals; I counted 16, including three adult bulls and two calves – the rest are cows and heifers. The original animals were Beef Shorthorn and Aberdeen Angus cattle. Today, two of the bulls are all black, the other speckled brown, reminiscent of Beef Shorthorn colouring. The cows are mostly solid white, brown or black, all looking sleek and fit in their glossy summer coats – in the winter, their coats get longer and rougher to help them withstand the worst of the weather.

The numbers are probably mainly controlled by winter starvation – there are no predators, and no human culling. What makes them remarkable is that in that brief period, their behaviour has completely altered from that of domestic cattle. From the same TV programme:

[T]he herd has developed its own population dynamics: the cows stay together in a herd controlled by the dominant bull or bulls, which vie for mating rights. Any subdominant, adolescent or older bulls get pushed out from the herd and live on the fringes.

When Packham and Oliver approached them, the bulls were congregated apart from the cows, from which the humans had to keep their distance because previous visitors have actually been attacked when they got too close. The zoologist Chris Packham was delighted by the way the cows gathered together defensively and watched whether the interlopers would come close enough to require a violent response.

He enthused that it was the kind of behaviour one only sees in wild cattle like musk oxen, and he’s right. I live in cattle country, and it would be a different life if one feared to enter a field of cows when out walking or, as once happened here, the herd itself goes out walking and ends up on your front lawn. On that occasion I shooed them out – not something one would try on Swona. 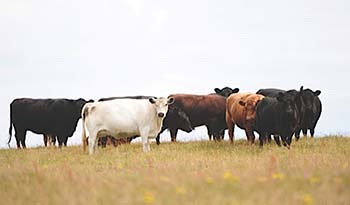 It would be wrong to say these cattle are the direct descendents of those slaughtered in the Neolithic feast at Ness of Brogar. But on the grand scale they are indeed so, sharing in the same domesticated gene-pool, and long separated from their wild aurochs ancestors even by 3500 BC. The aurochs went extinct (in Poland) in 1627 – in Britain they disappeared in the Bronze Age. Throughout that period, cattle have been bred primarily for good milk or meat, and secondarily for hardiness and other virtues – including , of course tractability and docility.

If you remember the chapters in Origin of Species comparing artifical and natural selection (you have read it, I hope?), you’ll recall that even when breeders are not consciously selecting for traits, unconsciously they are breeding animals that will do well in human settings. And one of the most obvious traits is that of being safe to approach. Aggression has been bred out of cows for millennia (about 900 generations since the founding of the Ness of Brodgar culture.

Aggression in bulls is another proverbial matter, but Scottish cattle are not bred for bullfights, and “docility” is one trait of shorthorns prized in crosses, whilst “placidity” is a characteristic of Aberdeen Angus. It’s maybe not surprising that that the bulls on Swona show unusual behaviour, in that domesticated bulls seldom get to live in groups. Even so, it is interesting that they, and even more the female of the species, should have reverted to ancient wild behaviour in less than one human lifetime. What can account for this is the interesting question.

It can scarcely be genetic evolution, surely, in so few generations. Besides, the environment has been entirely free from predation, or any real human threat, so one can invoke no selective pressure for defensive behaviour. If there has been no substantial change in the genetics, and yet such a profound change in behaviour, it seems another nail in the coffin of the whole idea that complex behaviours may be genetically determined (other evidence coming plentifully from sources as disparate as human sexuality studies  and the courtship of birds of paradise). Those behaviours have been both actively and passively selected out since the Stone Age – how could they still be represented in the genes? It’s not as if anyone trains ordinary cattle to be docile, or not to form a defensive block – they just act that way, whether they’re brought into the barn every night or kept out on the hills and moors.

If it’s not genetic, then, could the social changes be epigenetic? This, from other examples appearing in the literature, could very well be the case, and no doubt research could be done to demonstrate it. But, although it may be plausible at our rudimentary state of knowledge about epigenetics, that would give us no kind of explanation, but only an immediate cause. For although the Swona herd’s “evolution” (taking that in its broad sense of “change over time”) appears non-adaptive to life on a deserted island, it is entirely consistent with what would be beneficial to aurochs when it first evolved out on the Asian steppes with its predators, a quarter of a million years ago. An epigenetic cause would suggest some deepseated natural behaviour within the form “cattle”, which was  unaffected, ultimately, by artificial genetic evolution. Where, then, does this controlling behavioural “form” reside, and how could it govern the epigenetics in such a teleological way?

The same issue arises if we regard the behaviour of the Swona cattle as an example of Eva Jablonka’s cultural evolution. Against the unchanging background of basic genetic tendencies, species stumble on, or somehow choose, sophisticated ways of behaving, which are copied both by other adults of the species and young learning from their parents. The sum of these is the culture of the population. There is no reason, and much evidence, that such things are as true of animal populations as of human societies. But in this case, the notable feature was reversion to the behaviour shown by wild cattle back in the Pleistocene, and long forgotten by even the most historically-minded of Beef Shorthorn or Aberdeen Angus. As with the possibility of epigenetic mediation, there is some kind of primaeval form of being wild cattle deep within the animals (presumably – although an alternative would be a primal form kept in an unseen platonic realm, I suppose!).

One thing is certain, though – if people can call the hypermutation of the immune system, or the changes in tumour cells, “evolution”, then this interesting herd has also evolved, in just forty years (a saltational period as far as geological time goes), and genetics would seem either not to be involved at all, or involved in ways that fly in the face of Darwinian theory.

It may not be just the archaeology of Britain that the Orkneys turns upside down. 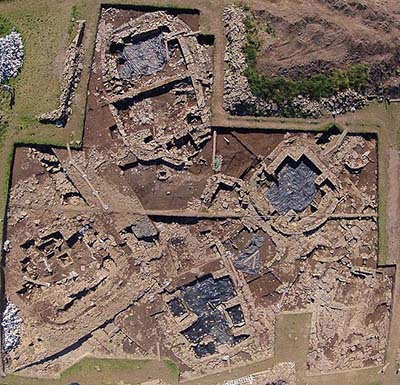