Last month we brought you the living fossil in my study. This month, for your oblectation, I present the astonishing acrobatic abilities of Megachile centuncularis, which has evolved to make its nest in steel patio tables.

Well, probably it didn’t actually evolve to do exactly that – though the more thoughtful evolutionists realise that there’s no way of showing that virtually anything was adapted by evolution to its present environment, rather than some past one (see here). If indeed adaptive natural selection is even a viable theory at all in these neutralist times. 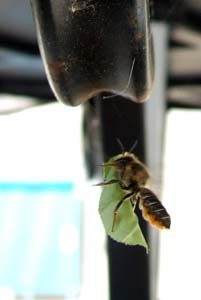 The creature in question is a leaf-cutting bee, one of seven in its genus in the UK and 1500 species worldwide, and apparently it usually nests in holes in wood. Incidentally, have you ever considered what a wonderfully providential fine-tuned invention the hole is for living creatures? What a sterile world it would be without holes – someone like Michael Denton ought to write a book on it, having done fire and water.

I was actually preparing our patio table for a family picnic on Saturday when I suddenly noticed a bee, apparently struggling to free itself from a spider’s web in which was also entangled a piece of leaf. Closer examination showed it to be carrying the leaf, almost as big as itself, and trying to manoeuvre it on the wing into a downward-facing drainage hole in the metal. This was not easy, and a couple of times it flew up to rest on the table-top. But eventually it got a grip, and proceeded to bee-handle the leafy tube inside along with itself. 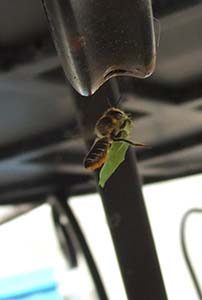 I hastened to get my camera, in time to miss the bee’s disappearance. But each time I put the camera away I came back to find the insect carrying another piece of leaf and repeating the procedure. I eventually captured the accompanying series that shows up air-sea rescue helicopter pilots as mere tyros.

My trusty pocket insect book quickly showed the bee’s identity, and between the book and other websites, I discovered that: 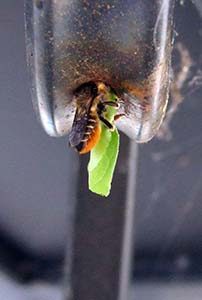 It seems each cell is then filled with honey, and with pollen that has been collected on the natty orange hairs on the bee’s underside (rather than on the legs as with your average bee). Each egg hatches dutifully in order, the closest to the entrance being first though laid last, and those nearest the entrance all being male and hanging around on street corners until the females emerge and pass by wiggling their tergae seductively. After laying her eggs the female retires and dies.

I later found one semi-circle of leaf that had got caught in a spider’s web, which seemed more like honeysuckle than anything else to my eyes. There is indeed a rambling honeysuckle just across the garden, and an examination the next day showed a number of leaves neatly (and quickly, on the evidence) cut away. Unfortunately I was unable to catch a bee in the act. 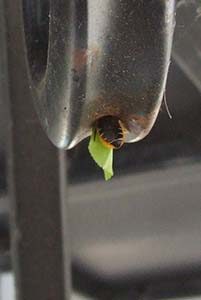 Similarly I missed a photo-opportunity the following day when, to my surprise, I noticed my bee still at her work, only this time carrying a smaller circular leaf, evidently to form one of the subdivisions of the tube of cells. There is some sophisticated developmental biology, not to mention a lot of complex, specialised and astonishingly skilled behaviour, going on in that life-cycle, wouldn’t you agree? And you can bet your life she didn’t learn it from her parents. And you can also be pretty sure nowadays that there aren’t any genes that code for clever proteins specifying the details of that behaviour as well as the special mouthparts and the high wing-loading. It’s pretty smart for a little beast with a segmental nervous system and not much brain, don’t you think? 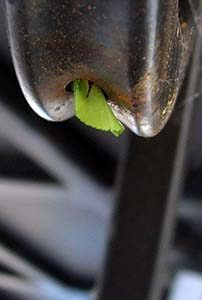 Indeed, as I’m coming increasingly to realise of the whole panoply of life, evolution teaches very little about how these amazing animals came on the scene. Like most things they just drop into the fossil record fully fledged, in this case more by finding the leaves they chewed rather than the fossils, which are rare. After that they just keep on doing more or less the same thing. And since every adaptive scenario is nothing more than plausible story-telling, the most that evolutionary theory can tell us is the possibility that the leaf-cutting bees are derived from some other similar group. Albert Einstein’s father ran an electrical equipment company and was a non-practising Jew – and I’ll bet that tells you no more to explain Einstein than if he had instead been a Methodist banjo player in a blackface band. Unless one wants to read yet another list of “may haves” and “could haves”, it’s far more interesting to 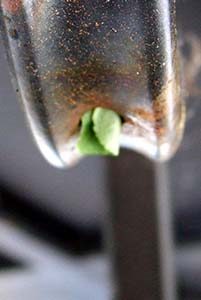 watch what these creatures actually do now than read how people speculate they came to do it:

The fossil record for megachilid bees is poor, but a Middle Eocene dicotyledonous leaf shows definite semicircular cutouts along its margin, implying that leaf-cutting bees existed at that time. Multiply-cut leaves and rare body fossils from the Eocene of Germany and the Paleocene of France suggest that Megachilinae began cutting leaves early in their evolution. Phylogenetic analysis yields an age consistent with this Eocene origin for the group.

So, although most of us have probably never even noticed leaf cutter bees doing their unique thing (I hadn’t either, if I don’t count the leaf-cutting ants I saw in Mexico doing a rather different thing in superb military style), and although we have no real idea how they got here, they’re nevertheless busy occupying their own unique world all over the place. And I, for one, am rather glad of that. 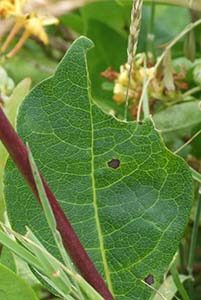 5 Responses to More natural history from the camel’s eyrie