The (selective) table of nations

Genesis chapters 1-11 continue to intrigue because, for all their “under-determination” of meaning for us moderns, and their mythic style, they keep resonating with details of the most ancient human history. And so, quite apart from any theological reasons, I can’t go along with those who regard them as ahistorical, nor have much sympathy with the idea that they are purely late, exilic, additions – they wear their great antiquity prominently.

Their tantalising ambiguity is exemplified by their geography. I have done a few posts, eg here, discussing the evidence for a southern Mesopotamian Eden, and for a flood narrative describing the memory of the Shuruppak flood event of c2900BCE. And there are some good clues to follow there.

Yet there are difficulties with that view. And there is also a case to be made for setting most of the events of those chapters in the upper Tigris and Euphrates, though that too is not without its problems. There are, for example, good candidates in Eastern Anatolia for the four rivers of Eden that match the description of the river being divided into four “heads”, understood as tributaries rather than tributaries as the southern theory demands. The Tigris and Euphrates rise close to each other, and another nearby river flows north to the Black Sea through a land of historically good gold deposits.

Yet, as I said in the post linked above, rivers seldom split into major branches watering disparate lands – and the Tigris and Euphrates even have competing watersheds. And yet, a glance at the literature shows that their upper courses, and not just their lower meanders, have altered greatly within historic times, and particularly as the climate changed after the ice age. I’m not sure that the extent of glacial cover in the Younger Dryas has been fully mapped, and ice-sheets do funny things to the course of rivers. That period overlaps with the dawn of agriculture, and therefore the possible cultural setting for Adam.

There are other clues in support of the north-western situation too, firstly in that the general movement of the text is from Eden to increasing ruin, involving progress towards the East: The cherubim guard the garden on that side, Cain is banished to the East, and migration east leads to the founding of Babel and its tower, where the story culminates. That directionality parallels the exile of both Israel and Judah to the east, the latter ending in Babylon, as described in some recent posts. Incidentally, there is a plausible match, suggested by Richard Middleton in The Liberating Image, between the “world’s first empire”, that of the Semitic Sargon the Great, and the events of the Babel narrative, pointing forward, of course, to Nebuchadnezzar’s Neobabylonian Empire. At the very least, the migration of Akkadian-speaking Semitic peoples from the mountains to Sumer is a close match to the men of Genesis finding a plain in Shinar as they moved east. 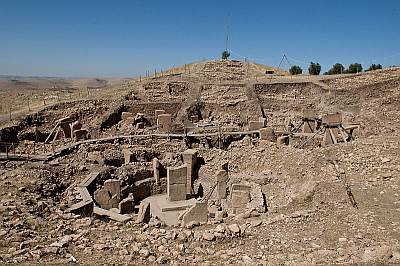 Then again, it is not impossible for the high plateaus to be the situation for the flood. The plateau of Şanlıurfa province, in Southern Turkey, is prone at least to flash floods. It is the site of Abraham’s town of Haran (the move west from Ur towards Canaan being a parallel with the Jewish return from exile), and also of the earliest temple sites in the world, notably Göbekli Tepe, as well as (possibly) the earliest city Çatalhöyük.

Furthermore it is bounded on the north by the mountains of ancient Urartu, where the ark grounded – somewhat more plausible than if it started in the environs of lower Mesopotamia near Shuruppak. Scholars have also pointed out that, at the likely date of the flood, the olive leaves that the dove brought back did not grow in lower Mesopotamia, nor the vines that Noah planted. However they did grow in Anatolia, where not only viticulture, but agriculture and herding, and the metalwork attributed to Tubal-cain, have left their earliest evidence.

There – I’ve persuaded myself of the northern case, at least until I revisit the evidence on the southern alternative!

But south or north, one thing that is of significance is the unusual interest shown by Genesis in the apparently obsessive desire of Noah’s sons to spread over the earth, documented in the unique “table of nations” of Genesis 10. In my university days, a linguistics lecturer made a mockery of that when he laughingly began the course by saying all modern languages stem from Babel. 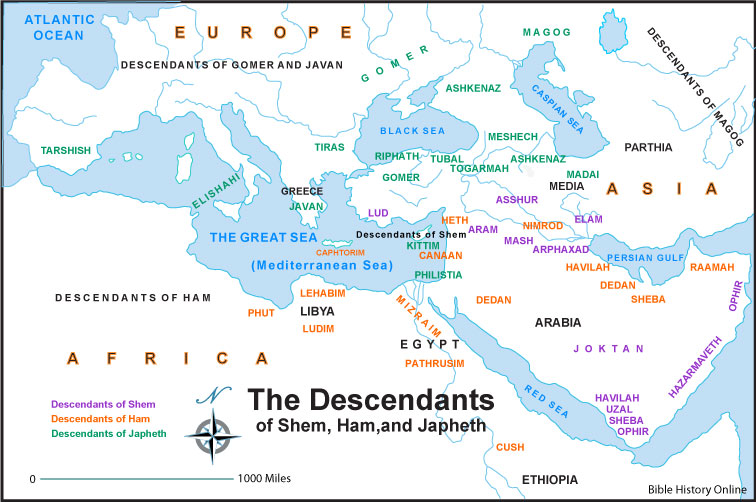 And yet since then the genetic evidence has shown beyond reasonable doubt that the Neolithic Revolution spread across the whole of Europe not just by diffusion of ideas, but by a mass migration of people from Anatolia. That, it seems, is how Cheddar Man’s descendants ended up white, as well as blue-eyed.

But I want you to notice something about that map of the Noahic nations. Though it is necessarily somewhat approximate, there is a decided bias towards the territory west and south of the Caspian Sea. “Semitic” (in the anthropological sense) spread largely ceases at the mouth of the Euphrates and the Arabian peninsula.

Now check out a couple of articles, or the graphics attached thereto. First, this one. It shows known Neolithic sites in Western Asia. Ignore the colours, which represent only dating methods, but note that there are two distinct foci, as if agriculture arose independently both in the ANE, and much further east, around the Indus valley.

Now have a look at this article, and particularly click on figure 4 down the page, which looks at human DNA patterns present both in Europe, and south-east to Anatolia and the Levant; and from Iran eastwards to India. Both reflect migrations of Neolithic farmers, but the genetics seems to confirm the archaeological evidence of two quite separate centres of origin.

What is fascinating is how the Genesis table of nations tends to match the archaeological and genetic story of the spread of the western Neolithic civilisation, even down to not claiming to have peopled the east. Now the dates don’t tie up well for flood dated at 2,900BCE, but that’s a detail.

Think about this, though – at every point in both the Neolithic migration, and in any Noahic radiation known to the writer of Genesis, the emigrants would have encountered the existing Mesolithic peoples they displaced, or absorbed, or however it was. And news of those encounters would spread back to the centre of the radiation. If the Genesis writer had knowledge of where Semitic settlers had ended up, as he did for the table of nations, he also knew there were other, pre-existing, peoples in those lands.

It was well known to the Mesopotamians, and also well-documented, that the Sumerians had experienced an influx of Akkadian-speakers from the upper Tigris and Euphrates – the same influx I have pointed to in the Babel narrative. So this mixing of populations must also have been known to the writer of Genesis 10, whenever it was written. The fact that it is not mentioned, just as other people living at the time of Adam are not mentioned, is therefore likely to be because Genesis 2-11 is about Adam’s offspring, not because only Adam had offspring.

I hasten to add that Genealogical Adam would still have been diffusing his family tree eastward despite this genetic evidence (check out another strand of DNA that fills in another part of the story). But when one considers that the European migration was a rare and important event that has determined our genetic makeup even up to now (I speak as an Englishman, you understand); and also that the table of nations is a unique document in a book that is important for separate reasons, but arising in the same people group – and you have an interesting historical phenomenon, rather than a vague myth.

God blessed them; and God said to them, “Be fruitful and multiply, and fill the earth, and subdue it…” 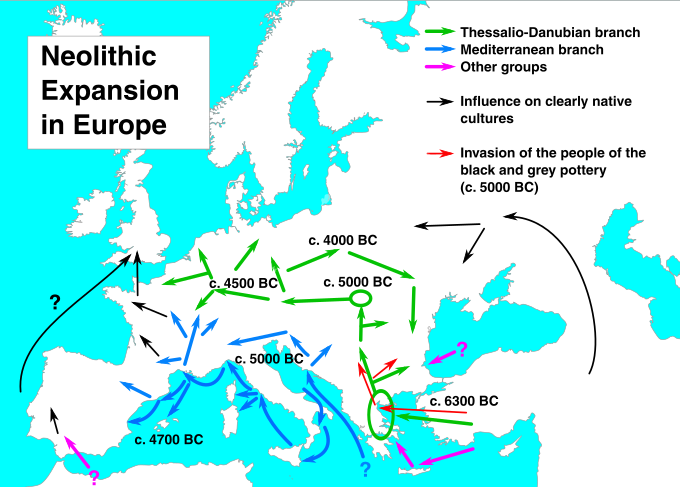 16 Responses to The (selective) table of nations