Now you see them – now you don’t

One of my current research aims is to demonstrate that the Bible itself has an awareness of other people existing in the world at the time of Adam, despite being overtly silent about them. I approached this from the point of view of the “compositional strategy” of the Torah and Tanach here, and from the point of view of hints about people other than Adam in the text here.

Today I want to take a look at a Sumerian text that might cast some oblique light on the solitude of Adam and Eve. That text is not the Atrahasis Epic, but I want to refer to that first since it is commonly compared and contrasted with Genesis, and with good reason because the two have many literary parallels. 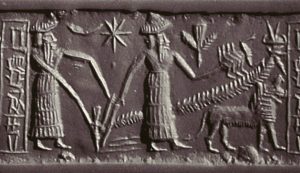 The gods doing the ploughing

One key point taught in Atrahasis, and in a number of other Mesopotamian texts, is that mankind was created to ease the labour of the inferior gods. These deities had been assigned the work of irrigation (this was the Euphrates flood plain, remember), which was necessary for cultivation in order to produce both grain and pasture for livestock. The minor gods protesting (and in some accounts taking strike action!), mankind is created from clay and slain god’s blood, specifically for this role of agriculture and pastoral activity, in order to feed the gods, which is done via the whole cultic apparatus. This functional reason for man is central, because it is the gods’ hunger that later on ends the flood and has them all clustering around Atrahasis’s sacrifice “like flies.”

The parallel with Genesis is that both in Genesis 1 and Genesis 2, adam and Adam (respectively) are also created for cultivating work. The hugely important theological difference is that in both passages in Genesis there is a strong sense of mankind’s being created not as slaves to save God work, but as co-regents to admininster his world. But the point to remember for now is that, both in Genesis and Atrahasis, mankind is created for agriculture, appearing to suggest that before agriculture there was no mankind: in both traditions we were created de novo for a specific purpose.

Richard Middleton’s excellent 2005 book on imago dei, The Liberating Image, quotes another Sumerian text, Ewe and Wheat (formerly known as “Sheep and Grain”), whose text may be found here. Middleton’s purpose in citing it is to critique the Mesopotamian concept of man as slave to the gods (and its social consequences), but I want to pick up on something entirely different.

The story is basically a “disputation text” in which two gods, responsible for sheep and grain respectively, argue about their importance. But the story begins with a “cosmological introduction” in which the gods have trouble getting enough food and clothing, eventually resulting in the solution of forming deities responsible for inventing pastoral and agricultural activities.

If we were to seek to integrate this into the mythological structure of Atrahasis, we’d have to place it chronologically before the gods started doing those jobs, before they got fed up with it and therefore long before the creation of man.

But in fact, part of the Ewe and Wheat introduction says this:

Now whether these primitive people were simply invented to add relish to the story, or came from some residual folk-memory of life before agriculture (bearing in mind that, like Atrahasis, it comes from the very dawn of literature in the mid to late 3rd millennium), the fact is that it states clearly that people existed long before agriculture, whereas Atrahasis says people were created expressly for agriculture.

Now, I wouldn’t want to press the matter too far. We simply don’t know how far either Ewe and Lamb or Atrahasis were taken literally, or believed to be factual at all, in their original contexts. There may have been rival traditions on origins, or the culture may not have been that concerned with consistency between different stories – after all, even C S Lewis got continuity across stories wrong sometimes (for the curious, in the space trilogy, the significance of the hero Ransom’s name is given in the second book, having been revealed as a “pseudonym to protect the innocent” in the first).

The bods doing the ploughing

But nevertheless both these stories come from the same culture, and were preserved by the same scribes for centuries, and they were able in some way to hold together the fact that Atrahasis, like Genesis 2, has man created for his role de novo; and that Ewe and Wheat presupposes people existing from time immemorial. These “former” people led an existence somehow removed from “people today”, whose customary labour of irrigation, farming and cultic duties is explained by the first account and not the second, whilst the “discovery” of that farming way of life appears in the second, but not the first.

Put more succinctly, absence of evidence of widespread humanity in an ANE creation text is demonstrably not evidence of absence, but only of literary purpose.

We can only conjecture how a Sumerian scribe confronted with this contradiction would reply, or whether his response would even make sense to our modern sense of logic. One obvious explanation, with possible relevance to Genesis, is that the scribe might say Atrahasis didn’t mention other people simply because it wasn’t about them, but real people like him. After all, when we say that everyone owns a mobile phone, we may tacitly accept that some cultural dinosaurs (like me!) do not, but it’s usually off our radar that there must be many remote tribal people-groups where nobody at all owns one.

It’s by no means impossible that, for a Sumerian priest-scribe with a highly functional view of things, bringing people together in cities so that the real gods were fed and worshipped correctly (thus holding creation together) was what constituted the creation of mankind in the first place, the divine blood and clay being figurative, and barbarians living long before or far away being simply irrelevant to his conception of “human” or “creation.”

Israel was not dependant on Mesopotamia for its beliefs, though it undoubtedly shared some of its thought-life. So if, as I have often contended, Genesis was written to the nation God called to transform the world, because Adam had failed to do so, then the history of Adam’s line is the story being told, and nobody else requires to be mentioned. But even so, people outside Adam’s line might be as implicitly present in the idea of the world that was to be transformed, as the non-Sumerians are when they peep out shyly from one small passage in Ewe and Wheat. 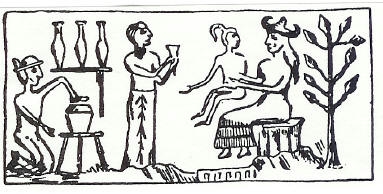 9 Responses to Now you see them – now you don’t