Esteemed Wife and I decided yesterday evening to forget government Brexit meltdowns, predictable Wimbledon matches and various sad local situations, and repair to Seaton Hole, a small and secluded beach close to home that we haven’t discovered in the nine years we have lived here.

My friend Andy alerted me to it, in particular because he has been watching a family of peregrines there – adults and two young – nesting on the cliffs. These would too distant to be the same family that we occasionally see over our house, but it may well be the next suitable territory along from us. We turned up in the warm evening sun under a clear blue sky, and providentially met Andy leaving after a swim as we parked the car. He told us one of the youngsters was making a row on the cliffs, but that the other peregrines were off hunting somewhere.

Despite the clear weather and the holiday season, the beach was deserted apart from a couple of paddle-boarders, and very beautiful it is too, if you should visit England 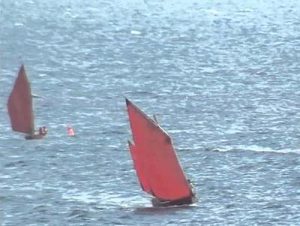 and like shingle. Across the calm and sunlit bay was the small resort of Seaton, and beyond that the red cliffs of the Jurassic coast rising to the east in golden evening sunlight. In the other direction, beyond the promontory, one could see the distant red sails of the unique Beer luggers, traditional wooden boats which race, with surprising aggressiveness, every Monday evening off the next beach, fuelled by wind and, I am told by the locals, by gin and tonic.

The geology is interesting for such a small beach, too. To the north are lowish cliffs of red Triassic mudstone, from a pipe in which gushes forth a redirected stream surrounded by horsetails which look as if they still harbour large Triassic millipedes. A fault separates that from a wedge of the same upper Greensand our house sits upon. Finally this is overlaid by tall, fissured, chalk cliffs, and it was these we staked out, having failed to see or hear any sign of our peregrines, apart from a ledge spattered with guano that might have been their nest site.

There was plenty going on, though. The usual flocks of herring gulls made a noise on the beach, and the cliffs harboured some cormorants and a few straight-winged fulmars. The vegetation above the beach harboured a good number of wood-pigeons – takeway treats for peregrines – cooing gently in balkan rhythms. Once we got our eye in, we could see there were also crowds of distant swallows above the top of the cliffs, safe enough in view of the evolutionary divergence of peregrines from hobbies mentioned in my last post!

So we enjoyed the idyll for a quarter of an hour or so as the waves broke gently on the rocks behind us, until suddenly the peace was shattered by the arrival of the whole peregrine family, like a teenage gang descending on a shopping mall, all screeching noisily and swooping on the pigeons apparently more to show them who was boss than in any serious attempt at predation. The pigeons dutifully panicked, until in a brief time all returned to normal. The adult falcon appeared on a ledge of the chalk, apparently feeding one of the young with something. We occasionally spotted the smaller tiercel keeping watch from another promontory on the cliff, and after a while the two youngsters, a lot less elegant than their parents at this stage, screeched and squawked their way round the cliffs like children in a playground. 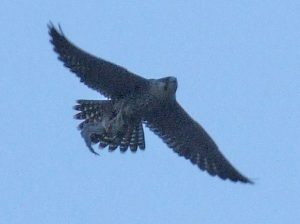 I took a few poor photos (not being equipped with a long lens), the only reasonable one of which showed, as it turns out, a relative rarity – a peregrine with a fish, an infrequent item of diet. It’s interesting to think of how it could pull out of a high speed stoop over water and get a fish in the process. Perhaps it was just a change from catching pigeons – which, according to Andy, include incoming racing pigeons from France, one of which he saw the adults take out over the sea a couple of weeks ago as a joint effort. Rare peregrine fisherfolk might be – but here’s the evidence.

When people speak of the tiger as “king of the jungle” they might just mean it’s the apex predator, but we had a wonderful sense of this family regarding the whole cliff as their personal property. They did, literally, rule the roost. All the other birds had their particular nooks or ledges, but our falcons seemed to settle wherever the fancy took them to feed, rest, or just make a row, and while we were there they didn’t even visit what we took to be their own nest.

Now, my purpose in this piece has been to try and paint a pen-picture of a brief encounter with nature, having last time used the same species as an object lesson on evolution. Get out into the realm of nature and it doesn’t simply instruct your mind, but it lifts your soul. We walked up from the beach with a great sense of joy, peace from the usual mundane human woes, and heart-worship of the Father God who made it all for his own reasons – and to delight our senses as his children. Exactly how such a typical experience of a small scene from nature’s ongoing play showed us the invisible God behind it is hard to articulate – but there’s no doubting the universality of the experience, even when it isn’t expressed in religious terms.

For those following the origins discussion – and of course in particular I mean those following this blog – let us never forget what the doctrine of creation actually represents: the overflow of the love of God into the world that is, if we take time to notice it, all around us. Never lose the perspective of praise. Get out into nature.

3 Responses to More on falcons