I’m not in any way primarily a political commentator, but in the “interesting” times in which we live, no thinking person can afford to ignore politics. In this case it was the brutal assault on a conservative (but Asian and gay) journalist Andy Ngo, who was filming an Antifa protest in Portland, Oregon – his home town. He was left with a brain haemorrhage, amongst other injuries, as well as having his equipment stolen.

Depending on which news media you follow, you may or may not be aware of it. It seems to have been largely ignored by the UK press (paradoxically the usually left-wing Independent covered it pretty fairly, though only in one article). This is despite the attack’s representing an escalation of the violence amongst “anti-fascist” groups that was clearly triggered by the unprovoked “milkshaking” of a number of people here in Britain, firstly Tommy Robinson but including the Brexit Party’s Nigel Farage, and also an ordinary member of the public outside the very lecture-theatre in Cambridge where I studied social psychology. I don’t think my alma mater will be getting any more of my money, sadly, since a member of my college was the perpetrator and appears not to have been disciplined at all for her criminal assault.

As a number of commentators have pointed out, the most significant part of the story is the way that mainstream journalists have defended Antifa’s thuggery and put the blame on the victim, even saying he invited it by turning up, and that he benefited financially from it by the crowdfunding that followed for his hospital treatment. “That violent Fascist just bit the toe of my boot!” What I want to do today is to try and demonstrate, from history, that justification for any such paramilitary groups is a sign of a sick, even a dying, society.

I say this because even amongst US Christians, there has been nonsense talk about how Antifa cannot be compared to the “far right fascist” groups which they seek to oppose. I say that, on the contray, they are exactly the same – except that as far as I can tell from reports both here and in the US, most of those they attack are in practice more moderate than they are.

In Portland, for example, only about 20 or 30 “chauvinists” turned up for a peaceful demonstration for their country and prayer, apparently. The Antifa people, however, numbered hundreds, were masked, and injured eight people as well as Ngo, including three police officers just doing their job. The three people arrested were from Antifa, not from the “fascists.”

Still, the reason always given for Antifa’s existence is the need to oppose violent right-wingers harming all kinds of minorities. I say that even if that is happening, it is an alarming sign of weak government, with close parallels in the Weimar Republic of Germany after World War 1, that led directly to the ascendancy of Hitler and all that followed.

Speak of paramilitaries in inter-war Germany, and one immediately thinks of the Nazi Brown-shirts attacking Jewish businesses and intimidating the public in street parades. They seem to be of a piece with Mussolini’s Fascist Blackshirts in Italy, and on a much smaller and later scale with Oswald Moseley’s thugs of the same name in the thirties.

But we seldom realise that the Nazi Sturmabteilung were just one of many paramilitary groups that arose in a politically precarious Germany following the Armistice, largely due to the victorious Allies’ restrictions on German armed forces, which created a vaccuum in law and order into which private armies stepped. 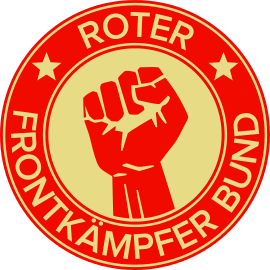 This seems to be a subject on which Wikipedia is pretty informative and dispassionate, and you can see that pretty well every political party ended up with its own paramilitaries, even the more moderate ones. Amongst the earliest, though, was the Communist Rotfrontkämpferbund, whose emblem, you will see, is remarkably similar to that of the Black Panthers back in the day, as was the criminality of their activity. They corresponded pretty closely to today’s Antifa in ideology.

Other early militias, known as Freikorps, were formed by ex-army officers mainly to quell Communist uprisings in various cities, in which the Rotfrontkämpferbund were very active. Remember that this was in the immediate wake both of the Great War and the Russian Revolution, and the imposition of world Communism by proletarian revolution was very much on the agenda of German left groups – in Bavaria, a Soviet Republic was even briefly declared. 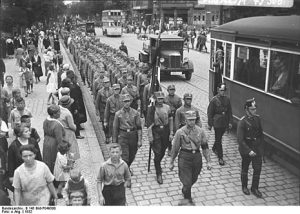 As extreme political parties of all kinds were allowed to flourish by the weak state, including the precursor of the Nazi party, the German Workers’ Party, founded in 1919, such paramilitary groups were formed to police their meetings, and generally to add political clout. Of particular relevance to the current situation is that policing meetings involved ejecting by force violent protestors from other parties (in Hitler’s case, of course, this included the Communist Rotfrontkämpferbund). Since at this stage his party began to brand itself as “National Socialist,” purely to attract those on the left, it looks as though the confrontations were as much to do with gaining party political advantage as pursuing any ideological commitment: at most, the Nazis were seen by the Communists as the “wrong kind of socialists.” 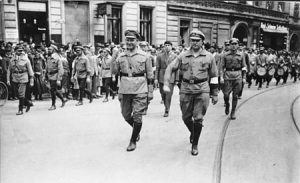 What is clear from this is that, over time, you were more likely to succeed – or even survive – as a political party according to how aggressive and violent your gang of thugs was. Tolerating such groups led only to increasing anarchy and societal conflict.

Look at the photographs of the various groups in action. Could you tell the difference between the Nazi SA, the Marxist Rotfrontkämpferbund, or the centrist Reichsbanner Schwarz-Rot-Gold? If you were an ordinary German trying to get through hard times, you might very well have been heartily sick of all these would-be generals and their private armies trying to get control of the country by thuggery. Much as is the case now. 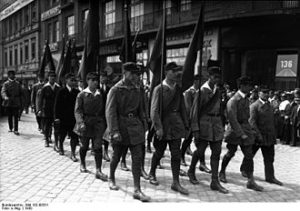 As it happens, Hitler managed to gain power, initially, by democratic means, though only with a 29% vote. And much of his popular appeal, it seems, was that he seemed likely to be able to control the increasing anarchy of paramilitary violence. And indeed he did so, by banning nearly all of the militias in a short space of time, once he’d managed to wangle his way to power. What is interesting, at this stage, is the degree to which the numbers of his own outfit were subsequently boosted by former Communists. As is clearly the case with Antifa, when imposing “hope against hate” by even greater hatred, violence itself is more important than who it is you actually attack.

In fact, though some leaders of the German Communists were Jews, as had been the case in Russia, it was easy for anti-semitism to influence the Communists, with the same justification that Hitler employed – the myth of a Jewish Zionist plot for world domination. This was very much a root of extensive anti-semitic activity in Soviet Russia, and German Communists, as I have already described, saw themselves as a continuation of the same revolutionary struggle. So for Rotfrontkämpferbund guys to join Hitler’s Sturmabteilung was not, after all, that strange, especially whilst the Nazi party still claimed to be socialist. The point is that the mindset of genuinely violent people crosses ideological boundaries, which end up as being mere excuses: hence you have no qualms about beating up a non-violent gay Asian journalist to protect gay and Asian minorities from violence. Irrational? Sure, but when were bullies ever rational?

My final point is that this can never, ever, be allowed to go on if good government is to happen. Hitler found it necessary to clip the wings of his own Brownshirts (they were eventually absobed into the war machine, of course), just as the Soviet government crushed all the other revolutionary groups in Russia once they were no longer useful, and as Mao mercilessly purged the Red Guards of the Glorious People’s Proletarian Cultural Revolution once they had consolidated his hold on power. Not to have done so would have made the country ungovernable by anyone. Contemporary examples of such a situation are Syria and Libya – whilst People’s Armies of various persuasions impose their will and oppose each other, ordinary people will never be able to live normal lives. 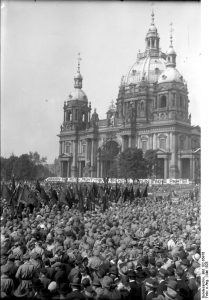 Nuremberg Rally, anyone? No, just the Communist equivalent.

And so when US politicians applaud Antifa’s escalating violence as somehow preventing a new Hitler arising, instead of prosecuting offenders harshly and banning their calls to violence; and when British police allow a group like the Muslim Defence League to bus into neighbouring towns and attack political meetings of the wrong stripe (perhaps due to the same fear of “Islamophobia” that has allowed rings of child-rapists to continue unchecked, whilst central goverment winked), then the experience of the Weimar Republic suggests we are heading for something horrible.

Exactly what that “something” will be is unknown, of course – history seldom repeats itself exactly. The Weimar Republic, for example, was weak because of externally imposed Armistice conditions. Our Western nations, though, have well resourced police forces, and are free democracies. What appears to be lacking is a sense of history on the part of political leaders.