More on the scientific dating of Adam

Back in May I did a piece on how the profound (and fascinating) changes in lower Mesopotamian topography over the millennia can endorse the broad historicity of the Genesis 2 narrative. But I did leave one or two loose ends then, some of which I might be able to tie up here.

To recap broadly, the conditions of Gen 2.4-6 can be demonstrated to match very well the conditions of lower Mesopotamia at more or less any stage after the climate became more arid after the ice age, especially around 3800BC, and irrigation of the annually inundated alluvial soils began in earnest, of necessity, under the Ubaids.

The four rivers of v10ff match the Tigris, Euphrates, Karun (the Gihon, still winding through what is now Khuzistan, the ancient land of Cush – Elam, not the Cush designating Ethiopia in the Bible) and the “fossil” river that now ends in the usually dry “Kuwait River”, which ran round the land of Havilah in the Arabian peninsula, where gold was mined until the 1950s, and where aromatic resin was a major export throughout antiquity. But this last river dried up c2500 BC, making any historical recollection of it necessarily prior to that early date.

But in 2500BC, the sea level was also much higher than it is today, having reached a peak perhaps 500 years earlier, close to the ancient cities of the area such as Eridu. Only in historic times – much later than any date for the writing of Genesis – has the coastline retreated far enough to allow the possibility of the latter two rivers forming a confluence with the Tigris and Euphrates – only since the Pishon has long been dry, that has never become possible again. 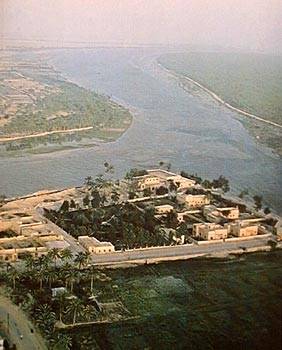 The last factor to be accommodated is the confluence in Genesis 2 between the Tigris and the Euphrates themselves. Nowadays they join at al-Qurna to form the Shatt-al-Arab to the sea, but though the nature of the land has caused many variations in the two rivers’ courses, historical records suggest that, having had separate outlets from the early third millennium or before, it was only around 100BC that they first rejoined each other. Once more that is far later than any possible date for Genesis.

However, this extremely illuminating survey  of the interplay of the various physical processes in the development of the lower-Mesopotamian geography show that there was a time, before the fullest extent of the sea-level rise c3000BC (coinciding with the most likely historical date for the Flood), when the rivers did flow together for the last part of their course, as Genesis describes. This would, as the link shows, have been in middle of the third millennium, going back perhaps into the fourth – in other words, remarkably consistent with the “Ussher” dates for the Eden narrative. In other words, if the remarkably detailed Genesis topography is not sheer fiction (and why, and how, invent an imaginary confluence of rivers which, at times, have had a real confluence?), then it must be recalling the land as it was way back in the 3rd, or even 4th, millennium, centuries before the earliest written records we have from the region. 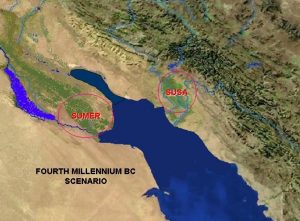 The only real loose end I see in this (based on the linked web-page) is that the advancing northern arm of the Persian Gulf, separating Sumer from Susa (Khush) seems to give the Karun River (aka Gihon) a separate sea outlet. But as the author admits, precise reconstruction of such a complex system is extremely difficult. It may well be that there was, indeed, a time when all four rivers flowed into a single confluence in the centre of the developing flood plain, but if so it must have been for a historically brief period.

Incidentally, the people dwelling across that arm of sea – which was certainly crossed for trading purposes in the third millennium – were of a different ethnic origin to those in Sumer. This would make a very plausible site for Cain’s exile amongst a potentially hostile people.

There is certainly every prospect that further scientific work will give a much more detailed history of the Gulf coastline and the courses taken by the various rivers. If that happens, it seems very possible that a historical window will open on the text of Genesis 2 that enables remarkably close dating of the events based on the physical geography in the account. The text would match the geography at that time, and at no time before (as the climate was wetter, and the sea-levels still rising after the ice-age) or after (for the reasons I have described above).

That wouldn’t guarantee the story’s truth, of course – but it would suggest a near-miraculous preservation of pre-historic geophysical detail down to the (relatively) late date of the final composition of Genesis. Such a remarkable memory would, I submit, only be preserved because of an equally remarkable event, and would almost certainly be a “folk-memory” rather than the gleaning of some exiled scribe from cuneiform tablets in the Persian age.

8 Responses to More on the scientific dating of Adam