Does Genesis 2 follow from Genesis 1, that is? One of the objections made to the Genealogical Adam hypothesis is that the idea that the story of the Garden follows sequentially from the Genesis 1 Creation account is wrong, and that they are actually different accounts of the same events.

Two main routes are followed to this conclusion, the first being the critical scholars’ customary theories, and the second being the canonical (and subsequently the historical) use of the accounts.

Let me deal with critical opinions first, because I think, like so much of 19th century biblical studies, the theory is well past its sell-by date. Even before the nineteenth century, the use of different names for God convinced certain scholars that they came from different literary sources, and eventually the whole “documentary hypothesis” put the “first” creation account down to the priestly source “P”, and the “second” creation story, the garden account, to the Yahwist source “J”, each with different traditions and theologies of creation.

The truth is that the documentary hypothesis is no longer a consensus, and one gains much insight by simply ignoring it, even whilst acknowledging that different sources may well have provided the raw material. For example, one soon sees that the garden account is not a creation story at all, but primarily a drama of failed intimacy with Israel’s covenant God (hence the use of “Yahweh”). The world is not created in it, and the story takes place only in a sacred garden in the existing world, to which Adam and Eve are eventually exiled.

In contrast I’ve pointed out before (as have other scholars) that Genesis 1.1-2.3 is not a story at all, being simply an account of God’s unopposed work. Genesis 2, however, introduces a new theme – the “divinization” (if you like) of Adam and Eve, and the tragedy of their fall, a theme which is carried forward into the Bible’s other two main movements, the call and failure of Israel, and the call and success of Christ. Now, it would hardly be surprising if a theological account of creation, and the account of mankind’s call by God, and his fall into sin and death, had different origins. But not because they are alternative creation accounts.

This is a canonical reading of Genesis (ie, seeking to put it in the context of the final purpose of Genesis, and the Torah, the Hebrew Tanakh as a whole and, finally, the Christian Bible). On the other hand the critical approach has always been about fragmenting the Bible into disparate sources whose final form is, at best, a crude attempt at harmonisation and at worst a mere patchwork.

I suppose the kind of canonical issue the critics see is, for example, the way that Jesus, discussing the words in Genesis 2 that “for this reason a man shall leave his father and his mother, and be joined to his wife,”, speaks about “in the beginning,” thus tying it into the Genesis 1 creation account that begins with those words. This (as my liberal religious knowledge teacher used to say at school) is one theory. But whilst Jesus may be thinking of the fashioning of Eve as part of the first creation, it is no less plausible that he is referring the the biblical beginning, that is Genesis. Like many biblical books, “In the Beginning” is the title, as well as the first words, of Genesis. Even so he would still be using “beginning” in a relative and not absolute way, for some time on or after the sixth day.

But as I have already pointed out here and in other articles, the creation account is not properly a “story” at all, and actually narratively forms the backdrop of God’s good creation against which the drama of history begins, with Adam, in chapter 2. So as far as the canon goes – the metanarrative which deals with God’s work in relation to Israel and the Church, and through them, in relation to the transformation mankind and the new creation – Adam and Eve are “the beginning.”

This is a literary explanation for why the Bible writers might associate the garden story with the Creation: not only are they close together at the start of the same book, but the Creation is the preamble to the story of Adam, which is the crucial archetype of the story of Israel. In a classic folk tale, “There was once a king who lived in a wood…” is essential to making sense of “…who decided to find a husband for his daughter.” That sentence is “the beginning”, because we are not concerned with the birth of the daughter years before, how the king met the queen, how the forest kingdom was established and so on.

The accusation of “concordism” against “Genealogical Adam” is important here. It is clearly the case that if Genesis 1 and 2 are complementary (or opposing) accounts of the same events, then either one must adopt a young earth position (with all the evidential and exegetical problems that entails), or say that Adam is non-literal, either in the sense of being “metaphorical” or of being pure fiction. The latter, of course, is not intended by the kind of critics I’m considering here.

But if we’re concerned about canonical, or even historical, understandings, then few doubt that the Bible writers and virtually all the historical theologicans saw Adam and Eve as true historical figures. For the most part that has only been questioned since it became evident that there were many indications that the earth is very much older than a 7-day creation within the last 10,000 years would allow. Adam then, they say, could not have been created on the sixth day of the world, and therefore, to retain the Bible’s theological truth, Adam and Eve must be mythical, or allegorical, figures standing for human sinfulness or some such general truths.

But if anything is straight concordism, that is: before deep time, nobody of note saw such a non-historical figure in Genesis 2-3, but afterwards, it becomes the “plain intent” of the Bible writers to express such non-historical matters.

Genealogical Adam is actually, therefore no more concordist than its rivals, excepting the “Genesis is flat wrong” school of liberal Evangelical exegesis, but it has the distinct advantage of being consistent with the vast majority of older theologians, and all the canonical authors, who interpreted the text without having to factor in the dinosaurs or palaeolithic cultures.

At the same time, even the very fact of seeing the two Genesis accounts as alternatives necessitates that, somewhere along the line, the final author intends a non-historical understanding. The animals cannot have been created both before and after man. But why should that a-historicity apply to the Adam narrative, rather than the Creation account? Instead, the tendency has been to see Genesis 1 as “ancient science” and mistaken. But it’s so mainstream as to be scarcely controversial now that the creation account is framed in terms of a “cosmic temple.” The world is clearly not “literally” a temple in the sense that it is made of dressed stone and trimmed cedar with doors and pillars, so the Bible writer may be justly credited with writing an account with a figurative literal meaning, and probably therefore, by intention, not an historical account.

On the other hand Adam and Eve have a geographic, historical and cultural setting, and a genealogy connecting them directly to Israel (and to Jesus, of course). It’s not so much, then, a question of “following on” from the creation narrative, apart from the truism that their story takes place in created reality, but of Adam’s story beginning the Bible’s chronology in a given setting, God’s cosmic temple.

And if the author of Genesis was aware of beginning his chronology with Adam, and of framing his creation story in temple imagery rather than as a history (and the imagery certainly did not get there accidentally), then he was also aware that there was a time, and a world before Adam. Adam begins the history in the Bible, but not the beginning of time itself. Because it would be irrelevant, the author tells us nothing about the history of that world before Adam.

The spoof English history 1066 and All That commences, “The first date in English history is 55BC, in which year Julius Caesar (the memorable Roman Emperor) landed, like all other successful invaders of these islands, at Thanet.” Its authors “compulsory preface” says humourously – but actually very profoundly – “History is not what you thought. It is what you can remember. All other history defeats itself.”

But although the writer of Genesis chooses not to remember any history before Adam, he doesn’t leave us entirely ignorant of what was in the world as Adam’s tale began to unfold. It contained all that is mentioned in the creation account – the heavens and the earth and all their hosts. Which included, as it describes, man, male and female, created in the image and likeness of God, just as the Genealogical Adam hypothesis suggests. 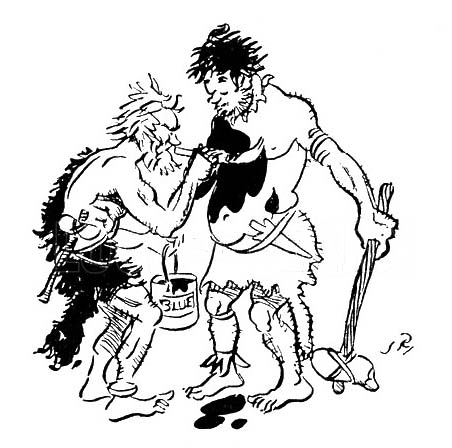 “Weeny, weedy, weaky.” (Britons before history, according to Julius Caesar, Source “1066 and All That”)