Ever since Intelligent Design raised its head, and quite apart from the question of falsifiability, there has been disagreement over whether it is possible to detect design in the absence of knowledge of the designer. One of the usual fields of conflict is the SETI programme, but here’s a small, real, example of my own. I don’t expect it to contribute anything very radical to the debate, but you may find it intriguing.

In 1985 on of my kids found this flint object in our lane in Essex: 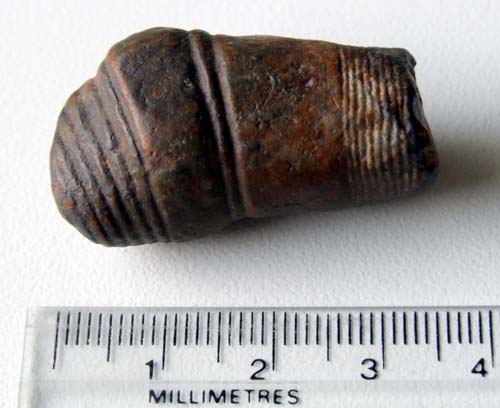 Our house was on a hill composed of outwash gravel from the last-but-one glaciation, and the unmetalled lane, on the site of mediaeval common land, was a mixture of that and pebbles added from elsewhere – probably a local quarry. In other words, there was no real geological or archaeological context. Nevertheless, we were interested enough to send photos off to the British Museum. I wondered if this might be some Romano-British phallic symbol or something like that.

The museum’s experts sent a very helpful letter back, to the effect that though it was obviously a worked artifact, it didn’t match anything in known British archaeology. In other words, it was unidentifiable.

Fast forward fifteen years or so, and I was walking around a nearby ornamental lake. The footpath was also gravelled, recently, but most likely using local stones from the gravel pit. Glancing down, I saw this: 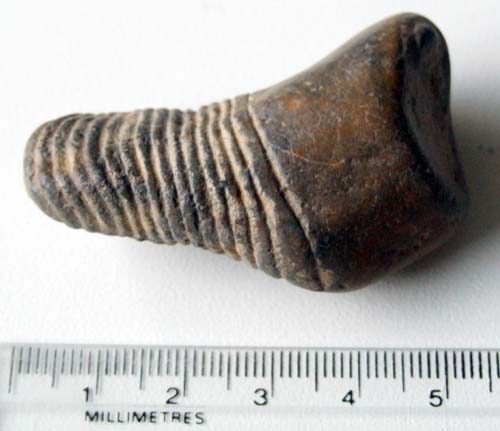 Not quite so suggestive as the 1985 object, but clearly of the same ilk, clearly not likely to be “planted” by local hoaxers, and clearly equally likely not to be identifiable to one of the world’s top museums. So I didn’t send it off. But I have posted it here, for your perusal.

So, my question is, was the museum right to attribute design to the first object? One might conceive both objects to be natural, worked by an unknown process. They have no human cultural context, so could have equally be alien artifacts or direct works of God. We know nothing about the designers, or their purpose – can we say if they are designed?

Furthermore, what the hell are they?