I’ve just received my copy of the Cambridge University alumni magazine Cam. I graduated nearly 40 years ago, but have only been receiving this journal for a couple of years. No doubt it’s angled at those of us with sufficient age and resources to make bequests in favour of our alma mater. Be that as it may it has an interesting article about Simon Conway Morris which, as one would expect from him, is mainly about evolutionary convergence.
I’m never quite sure what to make of Morris’s views on evolution. He’s happy to be known as a Christian, and happy to be considered heterodox by the Neodarwinian establishment – he himself (and he says many others) considers the Darwinian explanation incomplete, like Newtonian physics waiting for Einstein. That in itself is enough to sink the claim that there is no controversy about evolution within biology.

Morris says some controversial things. From the article:

A good part of organic systems rely on self-organisation. You know – that things click together. They do that, from our perspective, almost effortlessly; yet there is no general theory to explain how that happens.

If you or I said that on BioLogos, someone would quickly appear to tell us firmly that we don’t understand the power of variation and natural selection – but this is the leading authority on the Burgess Shales. He goes on:

We don’t actually know what life is at all.

A little further down:

The manner in which life constructs itself must be dealing with some other principle which we’ve failed to identify.

And towards the end:

I do sense that biology in particular is running into something of an impasse, especially when it comes to consciousness. We have a whole set of explanations, and I don’t think any of them work at all. Which may mean that these things are beyond our comprehension – we simply won’t know.
But I have a sneaking sense that this is not true, and that means that the world around us is organised in a rather interesting fashion.

And yet, for all that, the article says quite clearly that he’s not suggesting that anything mysterious is at work (“I’m not saying we should go back to vitalism or anything like that.”) It’s actually hard to be sure what he is saying – maybe his position is a bit like that of Keith Fox, Professor of Biochemistry at Southampton University, who in debate with Stephen Meyer conceded that the origin of life might turn out to be a chance event of infinitely low probability, but even so theres nothing irrational or unscientific about it. In such areas the distinction between acceptable science and unnacceptable Intelligent Design, or even miracle, seems to be purely semantic. And an odd distinction to make, for those scientists who like both Fox and Morris who are avowedly Christian.

The real start was when my mum gave me one of those little books for children where you had to tear out these big stamps of dinosaurs and stick them down in the right area. And something about that just triggered my imagination.

If, as I strongly suspect, the “little book” in question was this one: 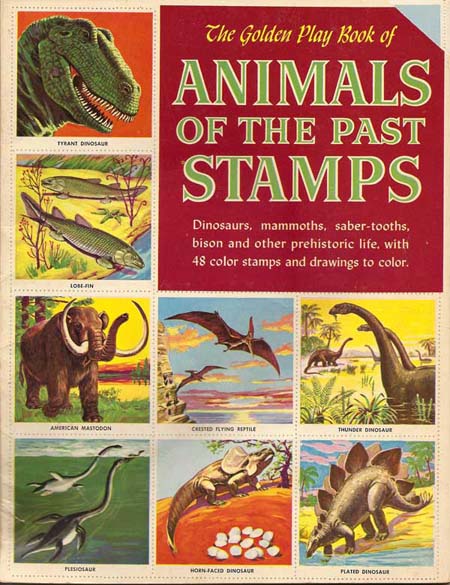 …then it was the same book that started my own lifelong fascination with prehistoric life when I was six. I discovered a little while ago that the book I got next, The World We Live In (for Christmas in 1958), was the trigger for Robert Bakker’s career as a dinosaur palaeontologist. It’s amazing what the world owes to the unsung writers of kids’ books.