More on Howard van Till, Billy Bean and Jolly Gene

I’m sorry to bang on about the BioLogos concept of “freedom” in nature, but I feel it requires banging on about until more people take notice. This concept is, I am convinced, the crux of the lack of rapprochement between Intelligent Design and Theistic Evolution and one reason why mainstream Christianity fails to mount a united and robust critique of atheistic materialistic naturalism.
In a post last year  I pointed to Howard van Till as the principal influence behind this approach to the whole question of a Christian understanding of science. I expressed some surprise that the reasoning leading to it was (broadly but not inaccurately) as follows:

(1) Contemporary science believes that the whole Universe can be accounted for by the processes within it, without external influence.
(2) If we dropped the traditional view of God’s creative agency for one that accepted this, we would no longer have any argument with science.
(3) The proposition that God deliberately limited his power and gave self-organising freedom to inanimate creation would achieve this.
(4) Therefore it is true.

Van Till bolsters his conclusion by phraseology that implies that the traditional understanding requires a coercive, tyrannical God, and I showed that this is nothing more than spin – it is as easy to word his theology in terms that make God sound irresponsible and feckless. I hoped that there might be sounder theological reasons for TEs to have adopted his model, and since then have been gently trying to find some, partly through questions asked of the BioLogos leadership on their website.

As I said in previous posts, replies have never gone much beyond the bare assertion of this “freedom”, without responding to my requests for clarification of it. So Darrel Falk’s last reply to me includes this:

We consider such an engineers-eye view of God to be wrong.  The process is Gods process, but God is not manipulating the details just as I as a father have not manipulated each event of my own daughters lives.  Joyce (my wife) and I  tried to provide a home environment with a mental plan, purpose, end in view, and adaptation of means to an end, but we did not engineer the details of our daughters lives.  (Whether we did this intelligently or not, is another story.)  Gods design, however, is intelligent and God, through that intelligence wills freedom for his creation, including the constrained freedom of allowing creation to make itself.  [Non-supportive Scripture references follow].  God is never out of the picture.  It is all Gods designincluding the freedom he builds into it.

First note that “[God’s] intelligence wills freedom for his creation” is a mere assertion ultimately traceable to van Till’s rhetorical question in The Nature of Nature, “What if the role of divine creativity is something quite different from form-imposing intervention?” Well, if that were so then maybe God wills freedom for his creation. But neither a rhetorical question nor an assertion are actually evidence.

Darrel and everyone else I’ve asked at BioLogos have failed to reply to how inanimate creation can have freedom in any sense analogous to children being parented. The only two possibilities would seem to be:

(a) That nature has been give freedom to design. Three conclusions would necessarily flow from this; firstly, that nature is a volitional, rational agent capable of design (which is vitalism), secondly that the apparent design in nature is real design (contra materialist science) and thirdly that what we see in the world is the work of a Demiurge, Nature, rather than of God the Creator (contra historical Christianity).
Or (b) That freedom actually means “randomness”, which of course is no freedom at all but merely a divine lottery.

You may, or may not, remember me quoting from a 1950s children’s programme, Billy Bean and his Funny Machine, in illustration of this. Memory being hazy, I have researched this a little further, and it seems ever more relevant to God’s supposed methodology in this last scenario. Here, first, is the theme song:

Unless one grants some kind of conscious dignity (vitalism, as I said) to nature, this seems about the level of sophistication of purpose attributable to the Creator in his work. The synopsis I found goes on:

Needless to say there were ‘bugs’ and the possibility of misunderstanding the graphical communication gave rise to considerable amusement. Some of the things the machine made were very surprising.

Darrel Falk’s recent reply to me seems to speak to this “amusing” waywardness:

Did God orchestrate the amazingly intricate details of how a virus successfully invades a cell, captivates its machinery, and then utilizes that equipment to make hundreds of more viruses just like it?

Apparently we are to assume not – this was the work of the very gifted, but sadly unreliable, free creation: Billy is not to blame. One of the puppeteers in the series, clearly keen to deny too much responsibility for it, writes:

When the BBC decided to run a children’s series based on Chuck Luchsinger’s American children’s show “Jolly Gene & His Fun Machine” in 1953, they called it “Billy Bean and his Funny Machine”.

So it was the Americans’ fault! But on a US site about “Jolly Gene” we read:

One of WABC’s less proud moments was Jolly Gene and his Fun Machine, which was cranked up in September 1953: the programme was reportedly an import from England’s British Broadcating Corporation, but while many successful American TV shows would be adapted from British shows in the future, this was not one of them.

Oh dear – the Americans deny responsibility too. Unfortunately my first source reveals that Billy Bean was first aired here in July 1953. So we Brits were indeed the first to teach our children to fly in the face of information theory. But wait a minute … the people who developed Open Theism in the US would have been kids when Jolly Gene was first broadcast in the US, of an age, perhaps, for it to have been a conscious, or unconscious influence on them. The idea of the freedom of creation cannot be legitimately drawn either from the Bible or from any strand of historic Christianity. But my research seems to have shown that there is at least one possible source for it.

Do you think I should post my research on on BioLogos? 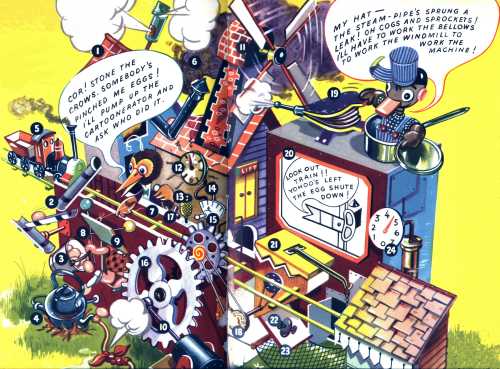 12 Responses to More on Howard van Till, Billy Bean and Jolly Gene