I’ve been reading a book brought to my attention by Penman (you might want to add some thoughts of your own, if you’re around, P), called Adam’s Ancestors by David N Livingstone. It’s a history of the various theories about pre-adamic man since the idea was first suggested by Isaac La Peyrère in the 17th century, which if it seems esoteric, is. It was of interest to me in general because of modern attempts to retain a historical Adam in an evolutionary scheme, on which I thought it might cast some light.

In the event it has only minor relevance to that issue, and has served for me more like one of those books you buy on a whim at the railway station bookshop, teaching you stuff you’d never have thought to study deliberately. So I’m not suggesting you go out and buy it. But in fact, pre-adamism had a tangential influence on all kinds of different areas, and because the book’s focus is not on the mainstream, it gives a very good picture of the general intellectual climate of the relevant times, and particularly the nineteenth century.

What strikes me most overall is that, in relation to the interface between science and theology, the debate then was pretty much identical to the debate now. A large number of the contentious issues now were just as contentious then, and seem urgent only because we’ve forgotten they have been tossed around endlessly since Darwin, and even long before. Indeed, one can see in the writings of the protagonists then, and their opponents’ replies, exactly the same attitudes, both good and bad, that we encounter now.

Atheist scientists then were still accusing Christians of being obscurantist in the light of the firm findings of science just as much as the Jerry Coynes of this world do now – with the difference that with the benefit of hindsight we know that those firm findings have proved completely mistaken. Which raises the question of why we should have any more confidence in what is “firmly founded” now, other than a blind belief that then=bad, but now=good.

At the same time theologians were making both good and bad use of Scripture and science both, with the passage of time once more bringing both into relief. Time makes fools of all of us.

On the fringes – or even sometimes in the mainstream – were the completely kooky ideas that somehow, at the time, seemed persuasive to many people because of the prevalent worldview.

The net result of this is to confirm my suspicion that the tide of progress is often really just a recycling of confusion. People tell us that there is now a broad consensus on the science, and clear trends in theology, but close examination rather suggests a multiplicity of incompatible views, in varying combinations, both within and outside the academic community. This pot-pourri of ideas also shows that the modern meta-narrative of the world’s being turned upside-down and set in a new direction by Origin of Species is a convenient lie. At the time Darwin seems to have been just one voice, though an important one, in a whole swirl of conflicting ideas influencing society. Just like now, in fact. 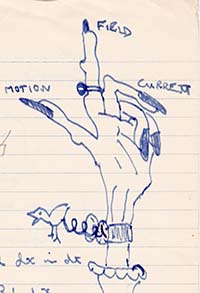 et me give just one case as an example of this plus ça change plus c’est la même chose observation. Livingstone cites Sir Ambrose Fleming (1849-45), who was without doubt a respectable scientist and engineer, and finally a member of the Royal Society. At school we learned his Left Hand Rule in physics (as evidenced by this illustration from the whimsical set of A-level notes bequeathed to me by my friend Murray before he too became an electronic engineer).

Fleming also invented the thermionic valve, without which my Marshall guitar amplifier would be very silent. His academic credentials were impeccable.

But he was also a Creationist and anti-evolutionist committed enough to lead the Evolution Protest Movement, at a time long before Creation Science and right at the start of the Neodarwinian synthesis. Like many theistic doubters of evolution today, it was not primarily evolution per se, but materialistic Darwinism that excluded design from nature to which he objected. He was happy with secondary causes, but not apart from a First Cause. He preferred, as Livingstone quotes:

Theistic Idealism, namely that the Universe is not a Thing; it is a Thought, and Thought implies a Thinker. In other words, it is essentially an Idea or Thought, in a Universal Divine Omnipresent Mind.”

Before the age of information theory or Philip Johnson, it is hard to think of a clearer statement of Intelligent Design, so no doubt he would be an Intelligent Design Creationist in any modern opponent’s book. Yet like some TEs today, he saw Darwin’s own stance as sympathetic to theism, and the Neo-darwinians of his own day as untrue to their mentor. Incidentally, the same uncertainty over Darwin’s true position was as much the case in the nineteenth century.

Like some conservative TEs today, he saw God’s intervention as necessary at three key points – the origins of matter, life and mankind, and argued from science and Scripture for these in opposition to what the Daily Telegraph called “the central modern scientific doctrine.” Fleming invoked pre-adamic man to account for Neanderthals and any other legitimate hominid remains, as R J Berry does today only with more allowance for evolution.

Paradoxically (by todays’s standards) part of his case was the division of modern man into several species of which the Caucasians were, naturally, spiritually superior (I’ll try and do a separate post about the interesting case of scientific and theologically based racism soon). He displayed an almost Southern-states aversion to inter-racial marriage, blaming it for the Great Flood.

Opposition to Fleming came in 1935 from anatomist Arthur Keith, who at least did not, as tends to happen nowadays, insist that Fleming’s Creationism disqualified him as a scientist. He did, however, complain that special creation was “impossible” (though note that Fleming’s three “creation points” hardly denied the reality of change over time through secondary causes). Though not, apparently, a believer, Keith felt qualified to argue against him from the Bible itself. It’s also interesting that Keith, the anatomist and anthropologist, was a staunch supporter of Piltdown Man, later shown to be a crude hoax. Another scientist critic accused Fleming of bringing metaphysical considerations into science, which a working scientist should not do – anothert complaint with a modern ring to it.

I’m pleased to say that at least one Christian reviewer of Fleming took him to task for compromising the unity of the human race by his white supremacist tone – it is fairly significant, I think, that this critique did not come from the scientists. Overall though, it appears to me that the case of Ambrose Fleming shows that apart from details of the scientific evidence and shifts in the general spirit of the age, very little has changed in the science-faith debate over the last 80 years. Fleming’s arguments, and those of his opponents, are virtually as good (or bad) now as in 1930. Time certainly hasn’t shown him up as an IDiot charlatan purveying pseudoscience, even if it hasn’t vindicated all he said.

And sadly I think that whether, in another 80 years, he is regarded as a backward looking fossil or a forward looking pioneer will depend more on the 22nd century zeitgeist than the actual strength of the arguments.

11 Responses to Gleanings from “Adam’s Ancestors”