At the heart of the concept of Intelligent Design, though surprisingly often obscured in the discussion, is the issue of probabilities. William Dembski’s work, for example, seeks to show that the probabilities of, say, self replicating molecules arising by known natural processes are too low to be practically feasible. In contrast, he argues, a process that is intelligently planned is, by its nature, improbable (like the contents of this post), and so is a good candidate explanation for complex, organised, entities. I don’t think that would be controversial if it didn’t lead to theological conclusions.

One set of responses to that – the most scientifically valuable – are those that say the natural processes responsible are not nearly as improbable as suggested. And so one reads, for example, the arguments about viable pathways between genetic variations in “sequence space” being, in fact, very common – rather than very rare. Debunking the ID thesis is then as easy (or as dificult) as actually demonstrating the high probabilities in such pathways, by proving they exist. At the moment, I have to say, it seems very difficult to do so, as does the invocation of entirely unexplored mechanisms like self-organisation.

But the point is simple: if such mechanisms exist, probabilities are high and evolution is, in fact, a reasonably lawlike process needing no external explanation.

This would not, incidentally, exclude God’s oversight provided one is thinking outside the post-enlightenment box that insists “natural” and “supernatural” are mutually exlusive. John H Walton in a recent video gives a good illustration of this, by replacing the idea of a pie divided into segments marked “nature” or “God” with a layer cake, in which the upper layer, the divine, covers the whole of the lower level, the natural. Aquinas’s concursus in a sponge – I like it.

A different set of explanations, much loved by atheists on the internet, but occasionally interposing in the scientific discussion, is that the probabilities are, indeed, astronomically low, but that “stuff happens”. So what if the emergence of life was a fluke that would only be likely to happen in one of 10^17 universes like ours? That’s no reason to dismiss the possibility and invoke design. That kind of argument, even when it postulates an actual multiverse to load the odds, strikes me as a counsel of despair. It’s also not how science usually behaves.

My only experience of working, as opposed to studying, in a scientific lab was several months after I left school,  working for the (then) Ministry of Agriculture Pest Control Laboratory at Worplesdon(now sadly gone – here’s my workbench as it was a year or two ago:) 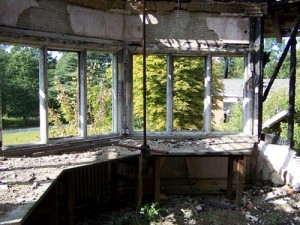 There I was able to learn that science was by no means dry and boring, because my boss, John, was pretty much as mad as I was, and we had some pretty good laughs. I hasten to add that he was doing good research as well. His project was on myxomatosis in rabbits, and one experiment involved placing sticky traps around an area of undisturbed woodland frequented by rabbits, with bait enticingly scented with bunny wee, in order to catch rabbit fleas (the disease vector) in transit between hosts. The site involved was actually on a top secret government research establishment, and I had the thrill of possessing a security pass for it, though the most secretive thing I ever saw was an occasional fox.

My first day was the day after the traps had been collected, and my first real task was to check them for fleas. As I remember there were maybe ten circular traps, perhaps a 1/2 metre across and divided into segments for precision. On about the third one I got to, I saw a flea stuck down between two leaves, and announced the fact to the world at large.

This task was actually done in a communal lab, with about half a dozen researchers working on various other projects. To my surprise, all of them came and clustered round me, including my boss, who seemed quite animated. Surely he couldn’t be that impressed with my powers of observtion? It turned out that in the 6 months the experiment had been running, this was the first time an actual flea had turned up – and it was common knowledge in the lab that John was beginning to conclude that rabbit fleas didn’t live the roving life after all. After some discussion, all the biological heads in the room decided that my prize was, without doubt, an artifact – a flea had escaped from one of the other myxamatosis projects being pursued in the lab and come to a sticky end there, and not in the wild.

I was a bit miffed at my first bit of professional science coming to nought, but after several months in the job, and the weekly trip to Top Secret Establishment X, without seeing another flea on the traps, I was forced to agree.

The point is, though, that by the standards of the 1:10^104 odds discussed in evolution and origin of life, the probability that my flea was a genuine wanderer was actually quite high. Fleas must, after all, occasionally get lost, surely? We set maybe 10 traps a week for, say 52 weeks. 519 were empty – one (mine) was a hit. Yet 1:520 was low enough odds to be dismissed as far less likely than an artifact (which would one could, justly, describe as “intelligent design” in so far as the experiment itself was designed: a typographical error is still typing).

In fact each of the traps was divided into eight segments for precision, so you could say my flea represented the rather slimmer odds of 1:4160 segments. But that’s still nothing remotely like the odds considered (by some) as “possible” in origins questions, where less than one in the number of events in the universe’s history seems not to cause embarrassment. Rather, those who baulk at them are said to be employing an “argument from incredulity”.

Which is, of course, exactly what my boss John, and the informal consortium of research biologists in the lab, rightly employed when I thought I’d found a single significant flea. Victor Meldrew has a valid point.

Next week – how to tell the sex of fleas – and how to keep them still long enough to do so. Mole-trapping I’ll leave for the time being.

Training in medicine (which was my career), social psychology and theology. Interests in most things, but especially the science-faith interface. The rest of my time, though, is spent writing, playing and recording music.
View all posts by Jon Garvey →
This entry was posted in Politics and sociology, Science, Uncategorized. Bookmark the permalink.