“Chance” is in some ways a slippery concept – in nature there are many different flavours of chance, and one really ought to consider them case-by-case. Many involve the unusual intersection of quite predictable events – like the kid in my street when I was at school, who always ran across the main road behind the bus when he got home, and always got away with it because there were a lot more spaces than cars. Until one day he and a car occupied the same space, and he died. We all knew it would happen, but it was a chance event.

Most of us unconsciously forget, in discussing Darwinian evolution, that it does not actually claim that mutations are random, but rather random regarding their fitness. If I put coins in a slot machine in increasing order of size, the pattern is not random per se, but is so with respect to how quickly I get some coffee. At the same time, it’s traditionally assumed that point mutations at any one gene locus, for example, change bases randomly, and observations to the contrary are, at least, considered suspiciously teleological. (Strictly speaking, there may be slight chemical biases involved, but these aren’t of major import.)

Think of randomness conceptually, though. We have laws of chance: let’s take a really simple one. It’s a law that single throws of a fair die will produce equal numbers of each face. So we conclude that if God wanted to produce a particular result, he’d have to fix the dice, or the throws, in some way, so they no longer obeyed this law.

Actually, though, the “law” is not based on real-world results, but on being self-evidently logical. Each number “ought” to have an equal likelihood – therefore they will occur equally frequently (or, the average score will be 3.5). In practice, though, it’s obvious this doesn’t happen. Here’s a record of 1000 actual dice throws from a precision die manufacturer: 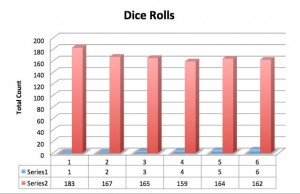 The chi-square value of these results is .84, perfection being 1 and “acceptable” 0.55 – so they are pretty close to fair. But even so they’re pretty far from the prediction of the law, even with this high number of throws.

Another law, the law of high numbers, says that such results will tend to converge on the ideal the more throws there are. Here’s a graph of another set of 1000 throws, showing cumulative average rather than each result: 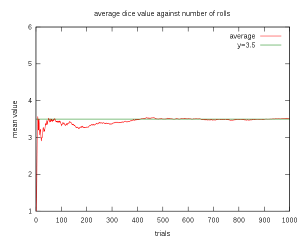 What’s interesting is that, even after the plot stabilises, it still wanders around the average quite noticeably up to the end. The reasons aren’t hard to find: the dice are not perfect, the throws may vary in many ways and so on. The fact is that both of these laws are actually laws about ideal platonic dice being thrown by ideal platonic hands – and those don’t actually exist in the real world. One might say that an infinite number of those dice throws might hit 3.5 bang on – but again, infinites are platonic ideals, not real entities. Nobody has ever thrown it. In the same way biological mutations cannot be truly random because they’re occurring in particular, not ideal, situations, and there aren’t infinite numbers of them.

In fact, a typical random distribution does not tell you there are no specific factors ensuring those results, still less that they are undirected, because they’re always only approximately random. That’s massively true in biology, as any graph from a medical trial will show you. Chance is causing nothing – more often than not you are seeing the results of numerous conflicting actual causes. All you really learn from your only-approximately gaussian distribution is that there isn’t a specific simple law governing the outcome – and you wouldn’t expect that in any case if God were doing something creative in evolution.

Therefore you don’t have to postulate God “breaking” the laws of chance to influence those results, because they are only ever approximately true in the real world. How he does it is not amenable to observation: he could, in the case of mutations, determine quantum outcomes as R J Russell has postulated. Yet that mechanism was only suggested to prevent the accusation of “tinkering” (quantum events are scientifically indeterminate anyway, so God’s breaking no scientific laws by fixing them) – but it’s only a metaphysical conceit that forbids God from doing what he likes with his own molecules. The laws of chance are only approximate in any case, outside of the heavenly Platonic realm, so how can they be inviolable? All that really matters is that, in “chance” events, God just happens to be working on areas not governed by simple physical laws.

Mind you, in the real world those simple physical laws are also only platonic approximations – but that’s another, if related, story.