A long and rancorous thread has, I hope, begun to peter out at BioLogos. I referred to it in an earlier post, written when it was merely controversial. The bitterness masks the fact that, hidden deep, some propositions were actually given some kind of answer, though in typical BioLogos fashion (sad to say) it’s taken 140+ posts, none by staff members, to slug out what could have been answered amicably in about seven. Let me try and summarise what I think is the actual reasoning, gleaned from a number of people’s possibly varying positions.

Q: Does not the proposed mechanism of evolution, involving apparently random processes, preclude God’s guidance of it, and especially in relation to determining the form of mankind?

A1: Consider the immune system, which operates by a hypermutation process involving apparently random mutations. Yet one may purposefully vaccinate ones children, knowing that the system will reliably provide immunity against the diseases one targets. Analogously, one might decide that God could equally use random processes in a targeted way (unstated premise: random is being used here as “unpredictable”, not only to humans but to God).

A2: The immune system may be taken as a proxy for the entire evolutionary process, involving many random processes, which in a similar way could be used by God for targeting specific outcomes. Specifically, variation/natural selection are so constrained that given the right genetic material, a specific environment might produce the same outcome (unstated premise: we assume here the convergent evolution of Conway-Morris over the non-replicable model of Stephen Gould).

Q: Assuming this to be true, you have only said that God’s direction is not precluded by such considerations: it is this purposeful control, more than the obstacle of “randomness” to it per se, that underlies the original question. Can you, and many other TE’s, not state unequivocally that God does intend and order such outcomes?

A: No, because none of us knows he does so (unstated qualification – I pass over the fact that some named by the questioner vehemently assert he does not). We therefore do not claim that God does not direct evolution, but that evidence for it is lacking.

Q: Your response of “I don’t know” is not good enough.

A: Why not? It’s the conclusion that drives the seeking of new knowledge. 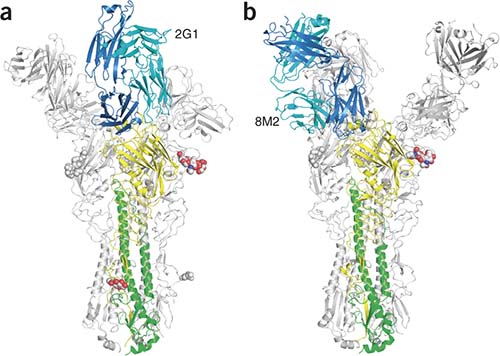 Antibodies about their business

In the past I’ve written much about the silence of TEs on divine oversight being, possibly, based on private denial. But an alternative, these exchanges suggest, might be private agnosticism. Now, as ever it is dangerous to generalise from this one plainly agnostic conclusion about God’s directive oversight of evolution to other TEs. However it is reminiscent of Roman Catholic blogger Crude’s exchange with Darrel Falk early in 2012. Crude’s question was simple and honest:

In your view, is evolution an entirely unguided process? Or was it guided by God, even if not in a way science is capable of detecting? Atheists … believe that evolution is a process which accomplishes what it does without guidance or input from any divine mind – the outcomes being neither foreseen or preordained. Do you disagree with that view, and if so, how?

Omitting, as above, a long train of aimless conversation, the heart of the reply was:

I … want to be clear that God delights in all of creation. You push for an answer that takes it further than that, by asking a significant philosophical and theological question I am not qualified to address. Your question needs to be answered by a philosopher not by me, a biologist.

The clear conclusion from such answers is that since science, whilst it cannot preclude God’s oversight of evolution (even should that include random processes), shows no evidence of it, so we cannot draw a conclusion. It seems to me that such a line or argumentation is clearly nothing but a form of scientism. What do I mean?

Scientism, a term in use for 140 years, has a rather flexible meaning (though not as much as “evolution” does!). But BioLogos‘ own FAQ, distancing itself from the concept, says:

Historian Richard G. Olson defines scientism as “efforts to extend scientific ideas, methods, practices, and attitudes to matters of human social and political concern.” 2 But this formulation is so broad as to render it virtually useless. Philosopher Tom Sorell offers a more precise definition: “Scientism is a matter of putting too high a value on natural science in comparison with other branches of learning or culture.” 3 MIT physicist Ian Hutchinson offers a closely related version, but more extreme: “Science, modeled on the natural sciences, is the only source of real knowledge.” 4 The latter two definitions are far more precise and will better help us evaluate scientism’s merit.

Many writers, though, distinguish between “hard” and “soft” scientism. Unfortunately I’ve been unable to source the origin of this division, but one description relevant to matters of God is this:

There are two extremes: hard scientism and soft scientism. Hard scientism believes that science alone will solve nearly all human problems or science will eventually explain or describe everything. If a belief isn’t “scientific”, then it’s meaningless.
Soft scientism says that theological statements must be subjected to scientific scrutiny in order to have any intellectual credibility.

Now “God directed the creation of all things” is a theological statement, and one attested in Scripture and the tradition more strongly than almost any other. If the biblical evidence does not tip the scales from agnosticism, it being granted for argument’s sake that the evidence of science is equivocal, then science is being privileged above Scripture, tradition (and also philosophy and metaphysics) as a source of knowledge. Therefore, if evolutionary creation is the belief that God created through evolution, this is a different position – which seems to me to warrant the descriptive term (soft) scientistic agnosticism.

I should add here that the equivocal witness of biology is no more than a subjective opinion. Many scientists down the years hold it to offer overwhelming evidence of God’s wisdom and power. There is, indeed, something of a Transatlantic cultural bias here – I’ve just read Prof Sam Berry’s soon-to-be-published John Stott Lecture on the history of evolutionary theory and Evangelicalism in Britain, which paints a picture of a very much more orthodox synthesis than BioLogos seems to offer. Yet even in the US scientists like David L Wilcox hold firmly to a guided evolution, with no fewer credentials than those on the BioLogos combox. The difference is theological, not scientific.

Returning to scientistic agnosticism, The question necessarily arises as to whether “seeking of new knowledge” in the scientific field has any chance of shifting the situation to one in which there is evidence for God’s direction? Is it even theoretically possible? Will fearful enquirers approaching disdainful scientists ever be told anything other than “Nope, still no evidence for God – but plenty of egregious errors and random events, so draw your own conclusion.” The answer is “No.” Given the criteria, scientistic agnosticism is the only possible position for such people. Why?

Return with me (mentally, at least) to my previous post Jimi Hendrix on Aristotelian causation. Since Bacon and Descartes, science has taken the conscious decision to limit itself definitionally to the study of material efficient causation. Now, in classical Christian philosophy, God himself is the initial efficient cause of every action – but such causation is spiritual, not material, and so is completely unobservable. If that is so even in miracles (no process is investigable: the water just appears as wine – Christ is seen to be risen and alive), how much more is it so in nature, where secondary, created, causes operate? In whatever mysterious way God effects the fall of each particular sparrow to the ground, you and I will see only a child with an airgun, or a sparrowhawk, or the fatal disease in the tissue samples we take. Such is the doctrine of secondary causation.

The previous article dealt mainly with two other kinds of causation: final and formal. In my view, imminent final causation (ie the functions and purposes built into nature – the eye intended for sight, or the seeking of an animal for food), though ostensibly ignored by science, is actually indispensible to any kind of theory. But though imminent final causation points indirectly to the existence of a disposing God, it is not scientific evidence for it. The external final purposes of God – why he chose for aardvarks or zooplankton or biologists to exist at all – are not only necessarily speculative, but they are specifically excluded from the scientific method.

Formal causes, I have argued in the previous article, may well map to the increasingly important field of information. And form/information is completely visible in nature, when one looks at the anatomy of a mole or the sequence of a DNA molecule or of epigenetic tags. But we only see form (information itself being immaterial) because it is instantiated in matter, and so it must be, by the scientist who has excluded formal causation a priori, reduced to its efficent causation, so that the latter is all that is counted as evidence.

Concretely, consider the conventional Darwinian mechanisms in Answer A2 at the start of this piece. The DNA of organism X has an information content, which can be deduced (or in theory, one day, even observed) to come about circuitously by this gene duplication and that de novo formation of an exon by neutral mutation. What else could there be to observe? There was bound to be an efficient cause, if it was a natural event. There was also bound to be a material cause, because DNA is a material. And even if evolution were a sequence of miracles it would still just be observed as a change of sequence. The only distinguishing feature in that case would be that the efficient causation would be inexplicable, that is, indistinguishable from chance – which is by definition not a cause, but ignorance of a cause. Oh, wait a minute – we’d then be looking at a process that appeared to involve randomness, wouldn’t we?

Regarding the idea that evidence from efficient causes might point away from God’s direction, rather than being strictly neutral, British Christian ornithologist and writer on evolution David Lack, way back in the 1950s, said:

[A]lthough on theological grounds the ordering of the animal creation may to some persons seem surprising, man is surely unqualified to judge whether this ordering is in any way evil, or contrary to divine plan.

Theological grounds are not, as we have seen, scientific grounds.

So scientistic agnosticism, as such, is incapable of resolving to faith because, considering only material efficient causes, it will only ever see material efficient causes. Only when other epistemological avenues are admitted to be more valid than the scientific in such a question will the agnostic allow herself to accept the testimony of Scripture, the reasoning of philosophy or the innate God-given sense of his hand in nature and say, “I know that God directed evolution, because he is the Creator of all things.”

It shouldn’t really be that hard for an Evangelical Christian to take that step, I would have thought. After all, most churches at least pay lip service those introductory words of the Nicene Creed: “We believe in one God, the Father Almighty, Maker of heaven and earth, and of all things visible and invisible.”

But then science must remain agnostic about things invisible, mustn’t it?

The power of random