We recently had the fun of escorting our pastor to a skydiving event where she was to jump out of an airplane as a fund raiser for our church. No, we weren’t trying to get rid of her, nor was it her first time exiting an airplane that way. I’m happy to report that the event was a success in every way; not that we expected otherwise. But that’s part of what my thoughts here are about.

We skydiving enthusiasts flippantly repeat the assurance that a car ride to the airport is more dangerous than an actual skydive. It set me thinking, though, about how undefined or open-ended such a claim is; and beyond that: Is there a prescribed Christian 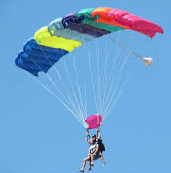 response for how statistics should influence our decisions in the first place? I’ll start in with the statistics of this particular claim.

To be fair to both activities, it would be interesting to know in terms of fatalities: how much skydiving is equivalent to how much driving? So I looked up the necessary statistics – just for the United States, where both air and road activities have some consistent regulation about them (not to mention that these were the first statistics I found).

Considering fatalities alone, which is the question that interests most people about a skydiving event—what are my chances of surviving—this becomes easy to calculate. Yes, it does overlook many other possible injurious but non-fatal outcomes for both driving and skydiving incidents, and No; skydiving is not a non-forgiving sport where any little mishap leads to near-certain death. But since the more frequent occurrences of mere injury or property damage muddy the waters considerably on both sides, we will keep our waters as clear as possible and stick to the question of interest: will I survive?

According to the United States Parachute Association (here), 3.2 million skydives took place in the U.S. in the year 2013. From those, there were 24 fatalities. This means if you were one of those jumpers, your odds of surviving each single jump were about 133 000 to 1. And lest anyone wonder if 2013 might be some anomalous year in that respect, averaging the last three years together yields a result not much different (138 000 to 1). And indeed that is reflective of the entire last decade, other than to note a general and gentle trend towards fewer fatalities in recent years compared with those years farther back –not surprising in a sport that is increasingly safety conscious. So … by itself that sounds fairly reassuring. Using our “133 000 to 1” as a baseline comparison, we can turn our attention to automobile safety.

According to the National Highway Traffic Administration (here), there were 1.13 fatalities per 100 million vehicle miles traveled in the year 2012 (the last year for which data is shown). That too, is very representative of recent years, other than to note that here too is a gentle trend toward more safety over the broader sweep of a decade or more; so I’ll use the 2012 number as it stands for our comparison.

Taking the number of miles driven per fatality and dividing that by the number of skydiving jumps per fatality, we see that the odds of surviving a single skydive are the equivalent to the odds of surviving a 670 mile drive. So a claim that there is greater chance of death on a typical commute to a local airport than in one skydive is actually in error, attributing greater danger to the commute than is warranted. 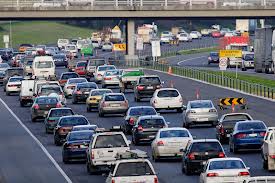 Odds of traffic-related death are probably reduced while one is parked on the “freeway”.

On the other hand, those sky diving enthusiasts who took the trouble to define their claim (I found one case), noted that they were favorably comparing a skydiving event to ten thousand miles of driving. That claim is correct; since those accumulated commutes are about fifteen times likelier to kill than one sky dive. Given how much driving most of us do without much thought year-in and year-out, there is still considerable truth in the comparison as long as we don’t over-dramatize it. And in all fairness, it needs to be noted that skydiving hobbyists typically do multiple jumps in one day, just as we all drive multiple thousands of miles each year.  And each event on both sides is a fresh participation in the fatality “lottery”.

This all had the curious effect of actually giving me pause about the safety of skydiving, given my own sober appraisal of driving dangers. I do not consider a 670 miles worth of commutes to be of trivial risk. Or conversely, I could choose to feel reassured about the safety of driving given my comfort with the notion of skydiving as a sport, and the paucity of fatalities involved. But all this is to miss an important point.

We do not helplessly submit our lives to statistics. That is, even if we armed ourselves with the knowledge that a million pedestrian road-crossings happen without serious incident (and I’m reasonably sure that it would actually be much more than a million if we were to find an actual number) we would not then, on the strength of our newly embraced statistic, adopt a cavalier attitude about crossing roads, neglecting any care or attentiveness. Any such road-crossing carelessness would undoubtedly put us into an entirely different probability pool than the one enjoyed by a more careful public. Likewise in all activities such as driving or skydiving, we exercise a lot of control over how those events unfold, making us far from passive participants in some impartial lottery. If we make a poor choice (as I have done before) to continue driving while fighting off sleep, then we are delusional to think we are still enjoying the same odds drivers generally enjoy. The real game we’ve chosen to play may be much more grim. And it could also have much improved odds if we choose to exercise better-than-average habits such as cutting back on excessive driving speed or maintaining equipment well.  We constantly do things to increase chances in our favor, as it should be.

Another question can also be explored on the theological front: Do Christians have any business attending to statistics regarding matters of survival while at the same time believing in an omniscient and sovereign God that has fore-ordained all things? Shouldn’t we just be trusting that all is in God’s hands, and that as such, there is no such thing as chance or luck? Obviously we’ve already answered this question in a practical sense by how we live – we very much attend to everything we can insofar as it rests on us. We don’t bow our heads in fervent prayer as we cross the street, petitioning the Almighty to prevent us from getting run over. No –we wait, watch and cross with our eyes wide open in full knowledge that it would just be plain stupid to do otherwise; and we do so without any hint of apprehension that such attentive care should somehow be antithetical to a life of faith. All activities are analogous to this, their frequency, danger, or necessity all differing only in degree.

Scriptures may not address this modern question directly, but as often is the case, there is indirect wisdom that can be applied. It is presumed throughout that all people are generally expected to act in their own self-interests as far as they can. In fact, much of Scripture is about curbing that tendency when sacrifice or care for others is recognized as the over-riding calling; but the self-interest is always there as a baseline, most evident in the command “…to love others as you love yourself.”

Regarding matters of “chance” beyond our control, we see examples of trust in God’s sovereignty, as well as examples of people who sought verification and were not always reproved for it. Our work to reduce what is left to chance and to extend our perceived (and real) domain of control could, I suppose, be interpreted as a lack of trust — after all, isn’t chance under the exclusive dominion of God? But this is a hard case to make when we are doing no more than what so many through Scriptural history did and were presumably expected to do: working and preparing to meet the known circumstances of each situation as best they could. A notable, perhaps exceptional category would be when lots were cast as a means of seeking Divine input for a decision. Sometimes the field of choice is left wide open for the lot, such as when Achan was chosen out of all Israel. Other times, the field of options was narrowed beforehand, such as when two candidates deemed worthy were put forward as disciples to replace Judas. Why the imposed restriction to two? Couldn’t God be trusted to select the right person from the widest possible field? Here we see an apparent mix of human and divine agency which may then reveal this fallacious dichotomy in better relief. The disciples were not reproved for not trusting God with a larger slate of candidates. It would seem that here, as in so much else of Scripture, God is working through both the known and unknown; sovereign over the whole process, not just the “chance” part. Human agency, regardless of one’s position on free-will, is not exempted from God’s sovereignty. The disciples discerned who the suitable candidates were, and then trusted God to complete that selection process. We use our minds. We also trust.  All under the guidance of the Spirit.

While some characters in Biblical narratives or parables exercise an expected resourcefulness, others may appear to attempt the same but earn a rebuke for not trusting God. Jesus, in parable speaks with approval of the prudence of counting the cost and assessing whether or one can successfully engage the task. Yet when Abraham and Sarah took matters into their own hands about how they might go about securing an heir, there is an implied rebuke in the resulting circumstances that unfolded. Or as a more explicit example, David is warned about trusting in the armed might of Israel instead of in God. The exultations of Hannah are later echoed in the song of Mary as we are reminded across the Scriptural ages that neither by might nor riches will man prevail. “Lean not on you own understanding” writes Paul, reminding us that even after exhaustive effort on our own part, there will always remain heavy lifting to be done by faith.

So whether some particular act of ours merits rebuke or commendation seems to be a matter of the heart – an almost case-by-case discernment with no easy formula to divide the two, and perhaps even discernible only in retrospect. When are you trusting as you should, and when are you calculating and working as you should? A respected Christian related how she would agonize to discern God’s will over so many things big and small. Even a decision over whether or not to go to the grocery store would be accompanied with great worry. Finally, she felt God nudging her with the simple lesson: “You know … I’ve given you a perfectly good brain. Feel free to use it.”

Merv has been a teacher at Flint Hills Christian School since 1993 and has also been active with his family in Manhattan Mennonite Church. Science and faith issues have long held his interest both personally and professionally, and he is passionate about cultivating a more robust intellect among the wider Christian community in the service of Christ.
View all posts by Merv Bitikofer →
This entry was posted in Merv Bitikofer, Theology. Bookmark the permalink.

18 Responses to Playing the Odds