More on seeing what you believe

One of the astonishing examples of theory driving observation in the history of science is how Aristotle’s theory of trajectory was believed by over 2 millennia’s worth of observers – careful philosophers, archers, gunners and small boys playing catch included – until Galileo showed they were all parabolae. How could people be so blind to what every day phenomena were telling them? 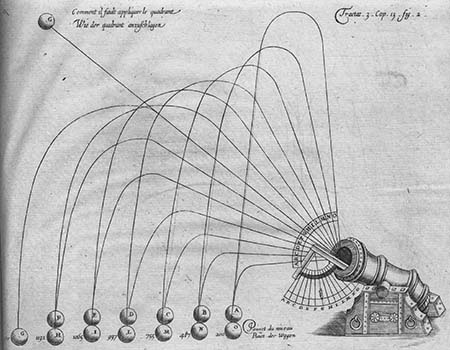 I’ve been wrestling with Goethe’s theory of optics – quite different from Newton’s – and have more or less decided that Newton has the edge now, but that given what was known to them, Goethe v Newton is a good example of the under-determination of theories by evidence and, conversely, that the theory you already have dictates the way you understand the evidence. Along the way, though, it’s a great example of the “Aristotle phenomenon” – how most of us can’t see what’s hiding in plain view because of the theoretical glasses we wear. Or in this case, prisms. This is the experiment Newton did that we all learned, and performed, at school, or at least saw on a Pink Floyd album sleeve: 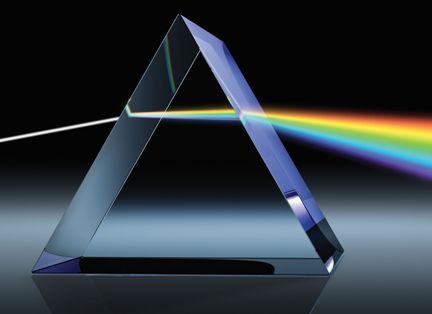 The interesting thing is that, though I must have seen a hundred such graphics preparing this column if I saw one, it’s not what happens at all, as Goethe saw when he tried to repeat Newton’s experiments. What he saw was what this photo shows: 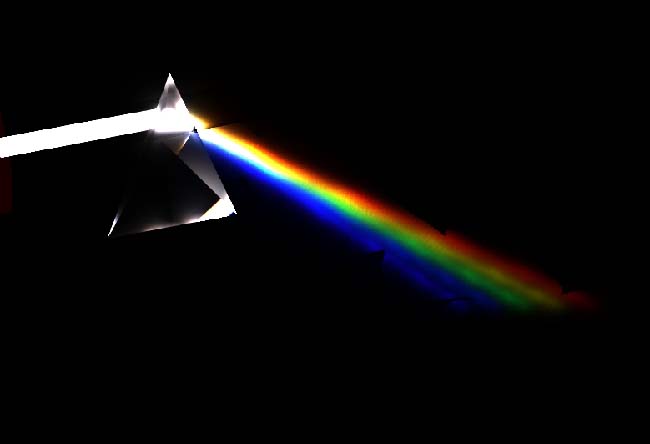 What’s noticeable is that the colour only begins to emerge and encroach on the edges of the white as one gets further from the prism, and Newton’s “pure” green colour only appears to arise when yellow and bright blue mix, these last two then decreasing in prominence. It’s easy to see why Goethe concluded that colour was a phenomenon arising from the interface of light and darkness, and not by differing refraction. Does the pattern not suggest two bi-coloured spectra radiating from the light-dark interfaces as the light emerges from the prism, and mixing to produce the familiar spectrum?

Now the first question is whether Newton noticed this phenomenon too. Goethe apparently thought not, but in fact Newton did deal with it in the second part of “Opticks”, as this figure from it shows: 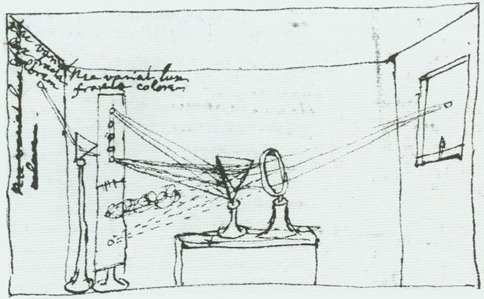 Indeed, this way of representing the light is used in his own famous sketch of his “crucial” two-prism experiment, though it’s not used in most of his diagrams. A little thought makes his own explanation clear: the effect is produced by the diverging parallel beams of refracted pure colour, and the changes are from progressive subtraction from white, rather than addition to it.

Incidentally this phenomenon makes you wonder if the first of the countless illustrators of textbooks only read the first chapter of Opticks to make his erroneous representation (my first picture) and everybody else just copied rather than – dare one suggest it – doing the experiment.

But it’s worse than that. I did the experiment in school physics, and I remember the light box, the prism, and the pretty colours all being on a sheet of paper whilst I used my pencil and ruler, and later crayons, to record the result. And what did I record? Just what I’d seen in books before, that assumed Newton’s theory: nice coloured beams bending twice. And none of the other 30 in the class, nor in the years above and below, nor in schools across the country and round the world, every draw the nicely criss-crossing bands of primary and secondary colours of reality. We all draw what we think we see. I wonder what happens to the odd kid who asks the physics teacher why his experiment doesn’t look like the one in the book? Enquiring minds, I suspect, are urged to enquire no more.

Anyway, the next question is why Newton came up with his subtractive explanation rather than Goethe’s additive one, since the data of the experiment (or of any of the prism experiments) really can’t determine which theory is right, as some quite prominent scientists have conceded. Newton set great store on avoiding “hypotheses” and drawing only inevitable conclusions from experimental evidence – like BioLogos’s Melanogaster, only perhaps less confrontational. This is how he presents his research in Opticks, as a series of experiments, some deep thought, and the right conclusions. The classic way of doing science.

But it’s obvious from his early notebooks that, like Darwin, this was more rhetoric than truth. Newton claimed at the Royal Society that though the corpuscular theory of light didn’t disagree with his theory, he was indifferent to it. But in fact that theory informed all his experimental work, just as Darwin’s evolutionary convictions coloured his research despite his protestations that they followed it. Light corpuscles, varying in speed or size, would plausibly be differentially refracted by glass, but would have no logical link to Goethe’s light-dark interactions, rational though they are and consistent with so much evidence. As ever it was the idea that came first, and then the supporting observation.

Incidentally, it’s not only corpuscles that, literally, coloured Newton’s vision. Most of us see five colours in the Newtonian spectrum (and note the five spots in Newton’s sketch above). But in his circle of colours Newton names seven (orange and indigo added), making it quite clear why in the text:

He sees seven colours because Pythagoran numerology says there ought to be seven, just as light must be refracted because Galilean (née Democritan) atomism says it’s made of particles. One last point on this: Goethe’s theory of colour, for all its faults, remains a theory of colour. Just as Galileo had already dismissed colours as a purely mental effect, so Newton’s theory dispenses with them immediately (interesting how in his diagrams they tend to appear as algebraic letters unrelated to their names), being replaced first with “angle of refrangibility”, then with theoretical invisible particles. Later, colour became a wavelength, and now it is whatever virtual and inconceivable entity quantum theory makes photons. Colour can be anything, in fact, that makes the maths work, even if completely unintelligible, apart from colour itself – which can’t be measured.

One more thing, perhaps in the “why this matters” department. One of the most obvious departures from reality of that abhorrent text-book diagram that misinforms every scientifically-educated child in the world is the refraction of light within the prism. What actually happens is more complicated, as this photo of the real experiment shows: 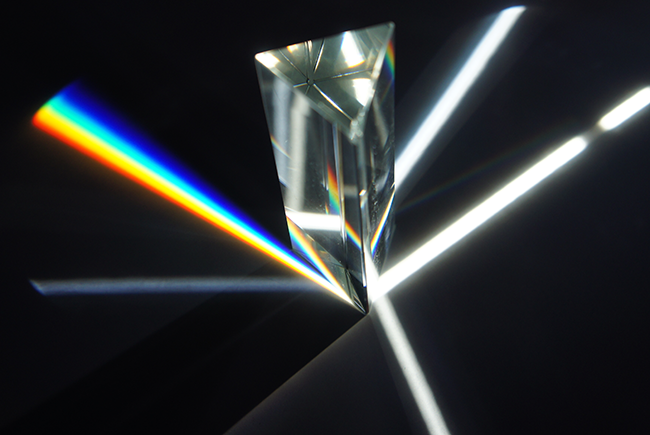 To orientate you, the incident light beam comes from the right, and the refracted Newtonian spectrum (not fully formed) obviously goes left. An initial reflection from the glass travels off to the bottom. But the white beam at 2 o’clock, showing little or no divergence, comes from internal reflection at the point where the emergent spectrum starts, and it in turn emerges with minimal refraction at the base of the prism. If you look carefully this beam is tinted red on the right and blue on the left, but there’s no real spectrum. There’s other interesting stuff going on too.

So in direct contradiction to the standard diagram, little or no differential colour refraction occurs when the light enters the prism, nor as it passes through the glass. Pretty well all of it occurs at the angled glass/air boundary. Goethe’s theory, or what little I’ve learned of it of it, doesn’t seem to explain that. But neither as far as I can see does anything I learned at school.

If the experiments are so misrepresented, how much is the resulting theory to be trusted?

14 Responses to More on seeing what you believe