A recent critique of theistic evolution on a Creationist blog rapidly led to a debate on the old issue of the existence of death before the Fall. A commenter by the name of Reuben K wisely raised the key issue of ones definition of life (and therefore of death), and then equally wisely left the discussion. He raised an interesting theological point in presenting a typical scientific description of living things:

According to current biological theory, in harmony with the most exalted theory of materialistic naturalistic uniformitarianistic determinism (you get the idea),

Life is the state and property of matter defined by and contingent upon:

Death, is, appropriately, the loss of any three or four of the above characteristics, such that the resulting body of matter cannot be truly said to be “alive”.

He then lists the categories of living things included under those criteria, including the bacteria that make digestion possible, the plants designated as food in Genesis 1, and humans as hominids. But he goes on:

Conversely, the following things are not alive:

Any and all exclusively spiritual beings, to wit, Angels, Demons, God the Holy Spirit, and human souls.

At a stroke he has shown that approaching the theological issue biologically (even via folk-biology) is bound to lead to category error. It has proved extremely difficult to define life scientifically, but the problem above would apply to any other biologically-based attempt, such as that of NASA:

The question of whether an observable phenomenon can be properly defined by a human theory is a subject for another occasion: should Darwinian evolution ever come to be superceded, would life cease to exist? But the question of what the Bible means by “life” is bigger than the “death before sin” red herring, as it deals with the nature of man as both an animal and a spiritual being. This post consists of a few thoughts on that issue.

The Bible describes human death (as distinct from death in general) as being the result of sin, but what does that “death” mean? Does it even include biological death at all? The warning to Adam was that he would die on the day he broke the commandment, but as has often been pointed out he lived long after that, dying at a more-than-ripe age.

Regarding the state of the deceased, the Old Testament (unlike some nearby cultures) so emphasises God’s blessings in this life that little is said about “life after death”. The place of the dead, Sheol (“the grave”), is a shadowy concept peopled by shadows. It’s often represented now as a physical world below the earth, but like the other elements attributed to Hebrew cosmology that may be an overly materialistic reconstruction. Books like Ecclesiastes speak of the loss of all action and knowledge, but some of the prophets have allusions to the dead having vague regrets or hopes. Certainly the metaphor of “sleep” is widely used in the OT to confirm that biological death is not the end of human existence, though that ongoing existence is extremely limited in scope.

Jesus himself, in the parable of the rich man and Lazarus, attributes conscious blessing or suffering to the dead. This may perhaps allude to current folk-beliefs rather than literal truth (just as a preacher now might use the trope of St Peter and the pearly gates for a humorous illustration without endorsing it as accurate), but it does show the flavour of later Judaism, which had come to see Sheol as the precursor of a general resurrection to physical life and to judgement for the deeds of the first life.

But if we refer back to the Genesis Fall, we can see that “death” cannot only mean (though it may include) biological death; that it does not mean “spiritual death” because some kind of continued immaterial life (and even a degree of consciousness) continues in the grave for all; and that it does not even mean differential participation in the final resurrection, which is said to apply to both the righteous and the wicked.

Ed Feser has spent some time  justifying the normal Catholic Thomist anthropology based around the idea of the human soul. Aristotle considered that the intellective part of humanity, being non-material, might survive death in an attenuated form, which seems compatible with much of the OT’s thought. St Thomas attempted a fuller integration, the soul being understood as the formal (“hyelemorphic”) organising principle of the human body (just as the souls of animals or plants are of their bodies). But being both rational and capable of eternal life, the human soul could not be naturally generated in the material realm, but must be individually created by God.

Such a view is a useful framework, but we should not forget it is based on philosophy as well as the Bible. At its heart is the idea of life – even the rather special case of human life – as a secondary power given to natural things. The plant or animal has power within itself to maintain its life until natural circumstances cause its death. That fits modern biology better than any kind of vitalism, in which life is a special force perhaps beyond nature. In Thomist theology man has the same innate capacity for life, but with the additional (natural but immaterial) power to live on for eternity like the angels.

Yet even that distinction of human from animal is open to question theologically. Scripture never actually states that the human soul is uniquely created for each person, although the case for a special creative “input” for Adam can be made both from the breath (ruach) of God breathed into his nostrils, and by the teaching in John 1 that the life of the eternal Logos was the light of men, even before the Incarnation. But in fact the closest approach to the individually created soul is in Psalm 104, and is about animals, not mankind at all:

…when you take away their breath [ruach],
they die and return to the dust.
When you send your Spirit [also ruach],
they are created,
and you renew the face of the ground.

This may be understood (and usually is) in terms of God’s concurrence in all natural events, rather than as a new supernatural creative activity, but then how is human life different? 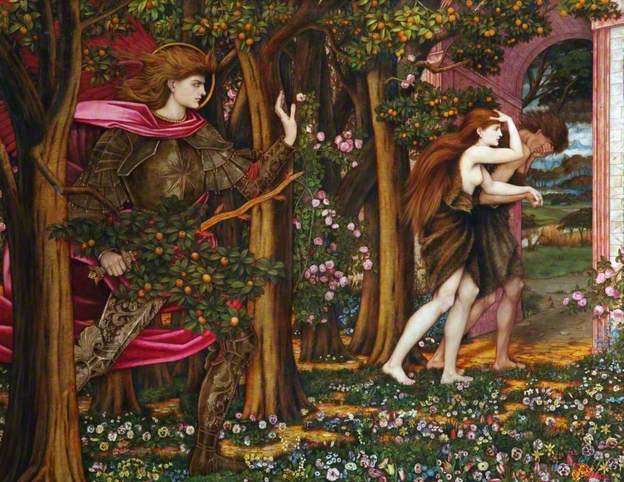 But there is another way to look at things which is not based on created natures, but on relationship with God. When Adam and Eve were excluded from the garden, it was to prevent access to the tree of life, by which they might live forever. That tree had not been forbidden to them, unlike the tree of the knowledge of good and evil, and so before they sinned they had access to it and hence, either potentially or actually, the capacity to live forever and not die – in whatever sense Genesis means death. Once they were cut off from the tree they were subject to death, even though they had full lifespans and their death did not end their personal existence in Sheol. Whatever “life” means, then, in this context, it is not a natural created capacity of the human soul, but something received from outside, over and above human nature.

That tree of life is a metaphor used throughout the rest of Scripture and, as in the Eden story, is closely related to the presence of God himself, and in its last iteration, in Revelation 22, to the water of life flowing from both God and the Lamb, who as he himself taught, “has life in himself”. Eden is the sacred space in which the human race first encountered, and lived in fellowship with God. It would seem that, in his presence, death is just not a possibility. The New Jerusalem is the eschatological equivalent of Eden.

Likewise the resurrection of the dead does not occur on any natural principle (one thinks of the hermit crab abandoning his old shell for a better one – or less attractively to some body-snatching alien in science fiction). Rather, the most that can be said for the “eternal soul” is that it provides some passive continuity until God’s own power raises the dead on the day he chooses. Indeed, in the passage in John in which Jesus says he has been given life in himself, he also says that the dead will rise when they hear his voice. 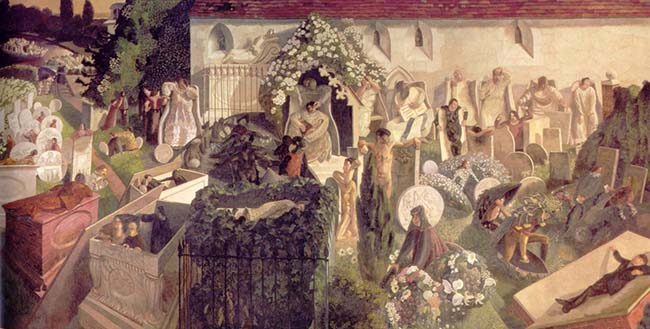 In Genesis, then, the warning and sentence of death have to do with separation from the life-giving fellowship of God, the reason for which any “eternal” component of human nature was included in his creation in the first place. Understanding that component (which requires a non-materialist science) will, at best, give one an explanation for Sheol, for ghosts, for necromancy real or imagined and, perhaps, for some near-death experiences. The final state, the resurrection of the body, can be best seen as part of the new creation, restoring what is suitable for renewing from the old, and not as the continuation of the old through its intrinsic properties.

But the idea of life and death in Genesis, and by extension throughout Judaeo-Christian theology, depends on understanding the unique human relationship with God, whether that be through created human capacities, covenant calling or both. In that particular relationship the animals and plants have no share, and so “death before the Fall” is a non-issue.