As regular readers here will know, I’m no Aquinas scholar, though I’ve found some of his thinking extremely helpful in gaining a better understanding of reality,  especially in the discussion of origins. But even I – and no doubt many of you – have some awareness of the annoyance of Thomists at the misrepresentation of Aquinas’ Second Way of demonstrating God’s existence, by some of the New Atheist writers. Ed Feser, for example, has devoted a few blog posts to it and in his book on Aquinas pours scorn on the “stock caricature”.

The Second Way, put crudely, says that everything that comes into existence (or more generally, that is contingent) must have an efficient cause, but that to avoid an infinite regress of causes, there must be a first, uncaused, cause. This is quite a strong logical argument, for few are willing to be seen to claim that stuff pops into existence for no reason at all, or causes itself because it exists before it exists. As a cosmological argument it’s stronger now than in Thomas’s day, since then one could perhaps argue that if the Universe is eternal and unchanging or cyclical, it would be a First Cause. Aquinas answers that objection via other arguments.

But in our day science is reasonably confident that the Universe as we know it “came into existence”, and so requires causal explanation. Even speculations about quantum vacuum fluctuations require the prexistence of contingent laws and the (contingent) vacuum itself. And in most conceivable models of an of expanding Universe like ours, it has been proven by Guth et al that a past-infinite existence is impossible anyway. The Second Way argument stands, therefore, and would still be logically valid even if it were possible to show that the Universe is a self-existent First Cause: it just wouldn’t have proved God.

The “caricature” version changes the initial premise to “Everything that exists has a cause”, which clearly turns a logical argument into a mere empirical assertion, and invites the question, “Who made God, then. Eh? EH?” Needless to say the New Atheists always leap from their false premise to the stereotypical rhetorical schoolboy question. So I was surprised and annoyed when a BBC radio programme, in an intelligent series on the origins of the Universe, began with a theologian (and not a New Atheist) asking: “What do you think of this as an argument for God? Everything that exists has a cause…”

One might ask why he didn’t study Aquinas before posing his arguments, but the bigger question is why such myths remain prevalent even when repeatedly debunked. I’ve asked the same question of other such perennial myths, for example here, here,  and here. The only plausible answer is that they serve the agenda of  influential factions in some way.

Why that agenda is pretty uniformly anti-religious is a question in itself, but it seems to be so, and here is another small example. It may be considered trivial, and it’s well off the “creation” brief of The Hump, but I doubt you’ll see it anywhere else so maybe it’s of passing interest. This myth is about “trial by ordeal.”

A year or two back there was a TV documentary series on the origins of the British legal system. It began with the infamous mediaeval “trial by ordeal”, the proof of innocence or guilt by picking up a red-hot iron, or plunging the hand into boiling water, or sometimes trial by combat. This was presented in the context that “religion” dealt with issues of justice in those benighted times, pointing out that the sentences were conducted in church. Christianity, it seems, introduced a cruel and superstitious system to oppress the peasants. Needless to say, such superstitious cruelty was eventually corrected once the secular authorities began to apply rational principles (cue Magna Carta).

At the time of the programme this didn’t seem a credible interpretation to me, but my suspicions were only confirmed yesterday when I happened to be digging into Aquinas (again) on the question of whether divination is lawful for the Christian.

Writing, remember, in the thirteenth century, when the ordeal was still legal in Britain, Aquinas not only specifically said that trial by ordeal was indefensible because it was putting God to the test, requiring a miracle for which there was no biblical justification, but he cited as an authority for his argument Pope Stephen V. Stephen having lived way back in the ninth century, this suggested to me the “received wisdom” might again be another oversimplification to suit contemporary prejudices. 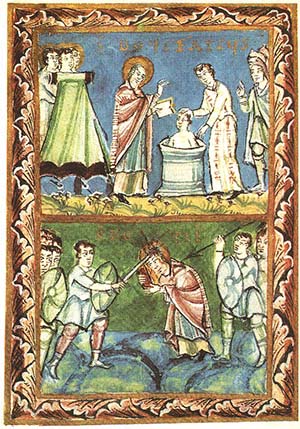 The truth seems to be roughly as follows. Roman law, and thus the Roman Church, had no concept of trial by ordeal whatsoever. However, when the northern European Germanic tribes were evangelized, the ordeal was already integral to their pagan legal systems. And possibly for moderately good reasons, in that reliable witnesses were not easy to find (so the gods were more likely to provide you with justice). It would have been impossible for mere missionaries to overturn these established legal systems, so although they spoke out against trial by combat, they chose to try and ameliorate the ordeal by calling on the accused to pray and fast beforehand, and to take communion (which accounts for the latter association with church buildings). One must remember that most bishops came from their nation’s ruling class anyway – they were often no less German in outlook than US preachers remain thoroughly American regarding such quaint and dubious local customs as the owning of firearms and the electric chair.

However, the fact that certain bishops local opposed it (such as Avitus of Vienne, d.518, and Agobus of Lyon, d.840) shows that the kind of scruples Aquinas had did not originate with him. And indeed, the generality of the Popes, and not just Stephen V, were opposed, and tried to suppress the ordeal. Before Stephen, Nicholas I prohibited a trial by combat in 867, and after Stephen Alexander II, Alexander III and Celestine III all said it was against Catholic teaching until, in 1215 (the year of Magna Carta, as it happens), Pope Innocent III’s Lateran Council issued a decree against ordeals and forbade anyone from seeking the Church’s blessing before undergoing them. Several similar decrees followed, including one from a synod of 1322 which stated “The tests of fire and water are forbidden; whoever participates in them is ipso facto excommunicated”.

As it was the secular rulers, supported to a surprising extent by their people, who had initiated the ordeal in the first place, so it was the state authorities that were slow to put the Church’s rulings forbidding it into effect, despite the far greater political strength of the Roman Church in the 13th and 14th centuries. The ordeal’s replacement by a variety of better, and worse, state judicial processes was gradual. The difficulties involved in providing equitable justice in mediaeval societies may be gauged by the fact that many opted for the newly-available trail by torture rather than submit to the possible perjury of their peers. No doubt it was cheaper than a lawyer, even then. Life is never simple, is it?

There was one more resurgence of trial by ordeal in the west, and that was during the craze for witch-hunts in the late 16th and 17th centuries. The reasons for an epidemic of belief in witchcraft and the resulting paranoia are unclear, as this page  shows. But it, and the resulting idea that guilty witches would float if thrown in a pond (the opposite of the earlier mediaeval idea in which guilty people sank!) seems to have been a compelling new societal belief that found its way into the Catholic and Protestant Churches (which historically had regarded witchcraft as fraudulent) rather than vice versa. 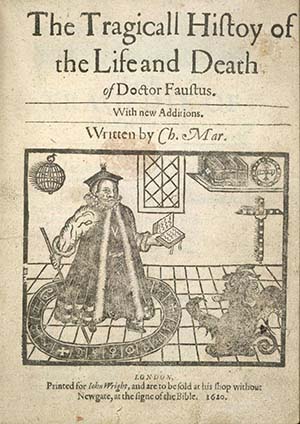 My own theory seems as likely as any mentioned on the linked web-page: and that is the undoubted increase of interest in magic amongst Renaissance intellectuals, and especially the popularity, through the Faust myth, of the stereotype of the magician who sells himself to the devil. Witchcraft was a street-level equivalent, and ordinary folks, unlike those university types, weren’t having any of it.

Well, it was an interesting thing to read about the history of one of those gruesomely compelling ideas from mediaeval history, and to find that the common wisdom that “Christianity dunnit” is, yet again, a myth. It’s not even a well-hidden myth. Wikipedia’s article, admittedly, is sketchy on the actual history – but even that clearly describes the official religious opposition to it. So why did a prime-time BBC documentary choose the lazy way out and trot out the “religious superstion gives way to civil reason” tale again? It’s hard to be sure, but it must be a similar reason to why after 730 years modern academics refuse to get Aquinas’s Second Way right. 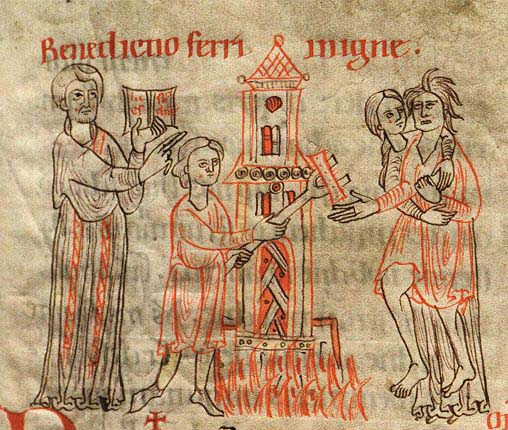