Arguments for the framework view of Genesis – part 1

Among views of Genesis 1 held by Reformed thinkers, the Framework view has attracted much positive interest over the past hundred years or so. It is not, however, a novel view, as we shall see. The basic idea is that the week of Genesis 1 is a “literary framework”. Its highly artful, complex, quasi-poetic form shows that it isn’t a simple historical narrative; no one would communicate such a narrative in such a form. It is an “exalted prose hymn”. The material of the prose-hymn is arranged into the shape of a week, but it portrays God’s creative activity in a topical or thematic way rather than strictly chronologically. E.g. days 1-3 form a perfect parallel with days 4-6, the text “revisiting” the first three days in its account of the second three. How much time the creation week took (whether short or long) in real “calendar time” is not addressed by the prose-hymn.

Augustine, arguably the most brilliant and influential of the early church fathers, and first great defender of the doctrines of grace, is the fountainhead of the “Framework” view. He teaches his version of it in his Confessions and his commentary on Genesis. Some form of the Framework view is found among the great Augustinian theologians of the Middle Ages, e.g. Anselm of Canterbury and Thomas Aquinas. It has been accepted and defended among modern thinkers by (for example) W.H.Griffith Thomas, N.H.Ridderbos, Meredith Kline, Lee Irons, Henri Blocher, Bruce Waltke, Tremper Longman III, Gordon Wenham, John Walton, and J.I.Packer.

A variant is offered by notable Reformed Old Testament scholar and Intelligent Design thinker, C. John Collins, whose recent commentary on Gen.1-4 offers a lucid exposition. The illustrious Hugh Miller (1802-56) held a view somewhere between the Day-Age view and Framework view: he thought the days of Gen.1 were not “days of creation” but “days of revelation”, in which visions were given to Moses regarding different aspects of God’s creative activities. However, Miller also held that each visionary day referred to long ages of geological time.

The clearest indication that Genesis 1 is not a straightforward historical account is the way the whole chapter is carefully, artfully structured according to the numerical values of 3, 7 and 10:

This artful numerical complexity is manifestly not how a simple, matter-of-fact prose narrative would be written. Genesis 1 is something else.

Another indication that Genesis 1 is not a straightforward historical account is the fact that it “is written in exalted, semi-poetical language” (E.J.Young). Many interpreters discern in the account a hymn-like flavour. It is pitched somewhere between poetry and prose: an “exalted prose-hymn”. Its use of repetitions, some alliterations, and majestic style, all point in this direction. The end result has been described as “a strophic hymn in prose or a hymn which is a unique blend of prose and poetry” (Claus Westermann). Again we must ask, is this how the author would have written a plain, matter-of-fact historical narrative?

Next, the writer’s use of the key word/concept “day” tells against Genesis 1 being a straightforward historical account. We find strong indications that we’re meant to understand the creation week, not as a literal human week of seven 24-hour days, but as a figurative week. It uses the language of a human week to portray God’s creative work, but the Genesis week itself isn’t presented as a literal human week taking place in real space-and-time (seven literal 24-hour days, one after another, as the actual “clock-time” it took God to finish His entire creative work). Consider the following:

In Genesis 1, we have six days of creation followed by the divine sabbath day. However, in Genesis 2:4, we have the entire creation week described in terms of a single day:

This is the history of the heavens and the earth when they were created, in the day that the LORD God made the earth and the heavens. 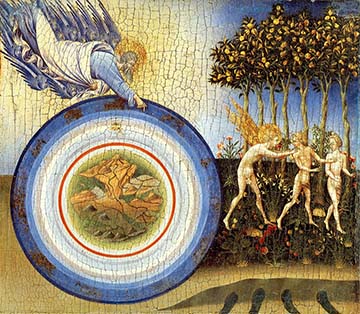 So the text uses the word “day” in Genesis 1 to describe each of the six segments of the creation week, and then immediately afterwards in Genesis 2, it uses the same word “day” in the singular to describe the entire process of creation. Whatever the “days” of Genesis 1 are, they’re all compressed into one single day in Gen.2:4. This is a clue that we shouldn’t take Genesis 1 as a literal, historical description of 24-hour days in clock-time: the one day of Gen.2:4 embraces all six creation days of Genesis 1.

Conclusion: this reveals that the text is using the word “day” rather more flexibly than the literal 24-hour interpretation allows. It therefore makes more sense to understand the creation week as a figurative week.

On the fourth creation-day of Genesis 1, God appoints the sun, moon, and stars to serve as time-indicators for the inhabitants of the earth (a sort of natural clock for animals and, later, humans) – Gen.1:14:

And God said, Let there be lights in the expanse of the heavens to separate the day from the night. And let them be for signs and for seasons, and for days and years.

This is the only undeniable mention in the Genesis text of 24-hour calendar days.

The work of God as the Creator-Craftsman in Genesis 1 is presented in very human terms, which (on the face of it) shouldn’t be understood literally. 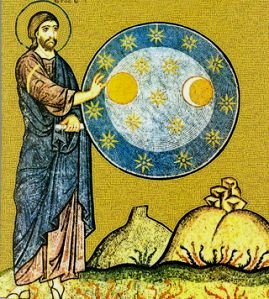 On the six creation-days, God is always and only described as working during the hours of daylight. Then we have the “evening and morning” formula. Unfortunately, the formula has been poorly translated in the Authorised Version as “and the evening and the morning were the first (or second, etc.) day”. A more accurate translation of the Hebrew is “and there was evening and there was morning, day one (or day two, etc.)”. The AV translation wrongly makes it sound as though the text is defining the day as being made up of one evening plus one morning.

However, let’s take the more accurate translation: “and there was evening and there was morning, day one (or day two, etc.)”. Coming regularly at the close of each creation-day, this formula signifies the end of daylight, the fall of night, and then finally the end of night as the daytime once again dawns. God is never portrayed as working in the night-time period.

But this is the human pattern in the Bible. Man does his work during the day, and then rests at night. See Psalm 104:20-23:

You make darkness, and it is night, in which all the beasts of the forest creep about. The young lions roar after their prey, and seek their food from God. When the sun rises, they gather together and lie down in their dens. Man goes out to his work and to his labour until the evening.

Here the night-time belongs to the beasts of the forest. Man works during the daytime, but stops when evening falls. This is exactly how God is presented in His work-days of Genesis 1. He labours as a “cosmic craftsman” during the daytime, then stops at evening, and then resumes His work the next morning.

This depiction of God surely makes the best sense when we understand it as figurative. The text is deliberately describing God in human terms, as though He were a working man who laboured in the daylight hours and then retired at night. We know, however, that God has no need of daylight to work, and no need of rest periods at night. God’s creative work is being presented in human form, in terms of a similarity to human work-and-rest periods in the daylight and the darkness.

If we see figurative language here, in this rhythm of work and rest, then there is good reason to see the days themselves as belonging to a figurative week. The text is using the human day as a method of portraying God’s work-activities in creation. In that case, we have no way of knowing from the text how long “God’s work-week” lasted in terms of historical calendar-time.

Summing up: the text is using the human work-week, and man’s cycle of work and rest during daylight and darkness, as a way of depicting God’s creative activity. Taking this picture a whole, we have no reason for thinking that the creative activities of the Divine Worker must have lasted only a literal week in human calendar-time, any more than we would insist that God is in reality a working man who works during the daylight hours and retires at evening for rest.

This indicates that God’s sabbath day of rest is ongoing – it isn’t confined within the space of a 24-hour day. So whereas the seventh day of the human calendar week is blessed as a memorial of God’s sabbath rest, the divine sabbath itself can’t be restricted to the 24 hours of a human calendar-day.

Other factors bear this out:

First, who would maintain that God’s sabbath rest lasted only 24 hours? If God’s sabbath day lasted only 24 hours, it must have ended at the end of that day; and then He would have resumed His creative work on the eighth day. But we know that creation was finished on the sixth day. God did not resume His creative work on the eighth day. God will create again only at the new creation (which the early church fathers for that very reason called “the eighth day”). We still await the new creation. Therefore God’s sabbath “day” of rest has continued beyond a mere 24-hour period or indeed any human time period; it endures throughout the whole time leading up to the Second Coming. We are still in God’s seventh day right now.

Second, Psalm 95 and Hebrews 4 teach that God’s sabbath rest is a present reality. The believer is invited to share in this rest right now. Therefore God’s sabbath has not ended, and therefore His “day seven” is ongoing – obviously longer than 24 hours, since more than 24 hours have elapsed since the creation of Adam!

Third, Jesus appeals to the present reality of God’s sabbath in John 5:16-17:

For this reason the Jews persecuted Jesus, and sought to kill Him, because He had done these things on the Sabbath. But Jesus answered them, My Father has been working until now, and I have been working.

Jesus vindicates His work of healing on the human sabbath by appealing to the fact that His heavenly Father, despite His divine sabbath rest, “has been working until now”. The Father works on His sabbath in His gracious works of providence towards humanity. Therefore His Son may imitate Him, and do gracious works for people on the human sabbath day. Jesus’ argument here about the Father’s continual work on His sabbath “until now” only makes sense if we accept the Father’s sabbath “day” of rest as a continuous period, from the end of the sixth creation-day right up to the present.

Conclusion: God’s seventh-day sabbath in Genesis 1 isn’t a 24-hour day, but a period of time extending from the close of His creative activity right up to the present. If so, the creation week cannot be a literal week in calendar-time. It is again better, therefore, to take the week in a figurative sense.