On the hearing the first cuckoo in twenty springs…

…I was inspired to explore their natural history a little more. The European cuckoo, famed in fable, has been declining in Britain for several decades. We heard them sometimes in the first few years we lived in Essex, but then they disappeared. And we actually saw a pair whilst holidaying in South Wales a number of years since. But this was the first one I’ve heard since we moved to Devon seven years ago, which immediately casts doubt on one theory that they find nests to predate by familiarity with their infant environment. 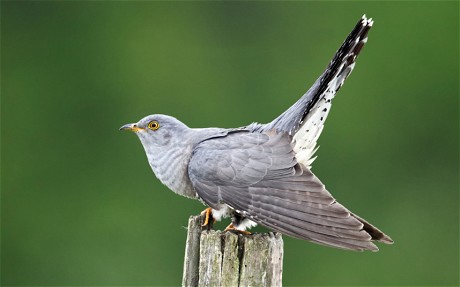 What’s astonishing to me is just how many aspects of this bird’s form and behaviour are built around the unusual brood-parasitic lifestyle it’s chosen. Its plumage and flight are reminiscent of birds of prey, which although it attracts mobbing, is supposed to divert females from their nests and allow the egg-laying deed to be done.

This latter, it has been found, is achieved within a ten second visit to the targeted nest, 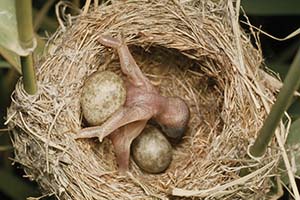 which is a lot slicker than my chickens achieve. Furthermore, it is said they have found a way to retain eggs in their abdomen a day or so longer than their hosts, thus ensuring the cuckoo chick is first on the scene. And that gives the latter the opportunity to engage its strategy of pushing all the other eggs out of the nest with its hollow back – involving both unusual anatomical and behavioural adaptations.

Before that, though, one must remark on the most celebrated achievements of the female cuckoo – first of all her ability to choose the right kind of nest, and secondly her ability to lay eggs that can closely match the host’s eggs in colour (an ability more remarkable because of birds’ sharp 4-colour visual system).

Both these are linked to the early observation that female cuckoos form a number of races or gentes, each specialising in a particular species of host. Though the males are promiscuous, these races remain intact across the generations, suggesting that they are sex-linked in the opposite way to sex-linking in mammals – in birds females have a W chromosome that males lack. Hence the old rhyme is not far off the truth:

The cuckoo is a pretty bird
And seven wives he keeps, I’ve heard.

Mimics (above) and their originals. Spot the incomplete adaptations.

A blog by Jerry Coyne even suggests there are seven such gentes, but the literature suggests it’s closer to eleven. In fact, however, accurate genetics on egg mimicry has not yet been done (a job for a keen research student, says Jerry). Mitochondrial studies have suggested that the gentes are real, but some research indicates that, though Coyne says females have no way of knowing the male’s genetics and mate indiscriminately, only 9% of offspring differ from the male’s supposed host species. So perhaps there is some autosomal component from the males – and perhaps also some rather mysterious sexual selection going on.

Be that as it may, assuming the overall picture above is true, the system allows different lines of females to specialise in host species, and yet for the species to continue as one. Another thing that seems to help adaptation to changed circumstances is that, for all their genetic targeting of specific hosts, cuckoos still lay eggs pretty widely across host species barriers. Over 100 species of host have been recorded for the European cuckoo. This helps account for the suspicion that, over centuries or more, new host species may be incorporated into the repertoire, perhaps as the old ones decline for some reason.

One problem they don’t have to face, it seems, is host discrimination against chicks, as opposed to eggs, even though other brood parasites in the world have just that problem and have had to adapt their infant behaviour to deal with it. Coyne (again) suggests that hosts have been unable to evolve better recognition because there is simply no suitable genetic variation available. “While genetic variation is pervasive in nature, it’s not always around when it’s ‘needed.'”

I’ve quoted Coyne a lot so far because he speaks as the archetypal Evolutionary Biologist. The whole thrust of his article is that the problems of cuckoo evolution are pretty well sorted and simple. An adaptive, or non-adaptive, tale can be told for every possible phenomenon. But in fact, browsing various articles shows this simple picture is far from the case, and instead it is hugely complicated.

To Coyne, the female’s targeting of nests is easily explained by imprinting of the host mother on the cuckoo chick. That, it is true, leaves the question of how a mechanism that keeps ducks close to their mother for protection became one for laying an egg in the nest of a bird of the same species as foster-mum. But even then it may be just another story. As a Nature article of 1999 explained:

But how does a female find ‘her’ host species? The explanation could lie in inherited preferences, or in the ‘imprinting’ of a cuckoo chick on its foster parents – nice ideas, neither of which are supported by much evidence.

Alternatively, the cuckoos could return to the geographic location where they were born – the cuckoo is a migratory species. This ‘natal philopatry’ idea is attractive and has some experimental support, but does not explain how cuckoos might disperse and track the distribution of host species. A fourth hypothesis proposes that female cuckoos choose a group of host species with similar egg and nest types and select a nest at random withion this group. However, this last hypothesis does not provide a mechanism underlying a female’s choice.

Taborsky and colleagues suggest, instead, that cuckoos look for nests in a familiar type of habitat – deciduous woodland, say, or low-lying vegetation. This is not quite the same as natal philopatry, as the type of habitat is not necessarily tied to the geographical location in which the cuckoos were fledged. However, a cuckoo is more likely to find hosts of the appropriate species by following certain habitat preferences.

A similar wide range of hypotheses is fielded for most of the phenomena of cuckoo parasitism that have interested biologists since both Darwin and Wallace speculated about them. I find that one of those who has done the most extensive fieldwork and best theorising on cuckoos in Britain is Nick Davies, my contemporary at Pembroke College (still a fellow there as well as Professor of Behavioural Ecology at Cambridge). I’m pleased to say he bucked the trend for doing biology in a test-tube and has performed field-work for his entire career, on the basis that better ideas come when you’re out in the real world. He is a strong proponent for the most popular theory of cuckoo egg mimicry, which is that there is an arms race between a cuckoo gens and its host species, with the evolution of increased host ability to distinguish “foreign” eggs being matched by ever closer mimicry.

But even that is more complicated than would appear, and seems to depend on historically unusual situations of over-parasitisation. In some cases this might involve over 40% of nests (which would certainly influence host survival), but in contrast data from a 1987 paper suggests only 1.4% of the nests of Britain’s six main host are usually targeted. And the whole thesis of an arms-race has been challenged by some researchers suggesting that life-experience is the main factor in egg-rejection.

Similar ambiguity is found in the cuckoo-chick’s “eviction” behaviour, which looks self-evidently advantageous, and therefore an evolutionary adaptation. But the detail casts some doubt on this, as Wikipedia relates:

My impression overall is that the research records many intriguing facets of the cuckoo’s lifestyle, and the responses of their host species. Although this is usually brought into the arena of evolution, for the most part the papers I read can only go as far as saying, “These facts can be fitted into a narrative based on the Neodarwinian paradigm.” As one reflects on the many “new kids on the block” in biology, one can see that explanations from epigenetics and other fields might fit the data as well, or better. We’re at the stage in biology now that, when somebody does get around to pinning down the cellular mechanisms actually responsible for egg mimicry, they’re quite likely to be “not what we expected”. So perhaps future research will be less prodigal in its generation of hypotheses before the detailed work is done. We can no longer assume that adaptationist stories will apply.

One of my own interests, as previous posts have shown, is in the global (or holistic) aspects of form – if you like, the internal teleology that maintains the essential features of a taxon – in this case, parasitic cuckoo-ness. When one looks at the many aspects of adaptation, co-adaptation, and so on referred to above, the sense one has (but all too easily takes for granted) is the way that all the changes found or assumed in the cuckoo are apparently targeted at doing the unusual job it does, and doing it well.

Whatever the mechanism (and it’s still unknown) cuckoo females put enormous amount of energy into finding the best nests to parasitise, but never seem to revert to the primitive bird strategy of laying all their eggs in one place and incubating them. It can’t be much harder than developing an anatomy and a set of behaviours aimed at evicting all rivals, hamming up your hungry look to persuade some poor reed-warbler you’re a nestful of babies, forming sex-linked races and so on. It’s as if the basic lifestyle were built into the blueprint. Granted there’s been plenty of time for that to happen (cuckoos appear to be an ancient family), but by the same token it’s had plenty of time to disappear, too.

But with the cuckoo, it’s hard to be sure what is fact and what is fable, even in the scientific literature. One factoid I read about the male cuckoo call (the female’s isn’t the familiar swiss clock sound), which has no obvious link to brood parasitism, is that the cuckoo demonstrates perfect pitch, calling always in the key of C. Admittedly, when I checked the audio clip on the Royal Society for the Protection of birds website, it was in that key, give or take a few percent. But a quick check on the clips available on YouTube showed a variation between B natural and just below Eb. So I take most of what I read about cuckoos with a pinch of salt.

Who knows – maybe the one I heard was actually a redstart that had evolved to mimic it as a defence.