I put in a couple of comments on a thread on BioLogos that began by tut-tutting Intelligent Design’s “anti scientific” stance. Coincidentally it overlaps with the theme of my last post on ID, whose aim (by provocatively portraying ID as a foundational science rather than the more usual accusation that it is a pseudo-science) was to draw attention to the historical centrality of teleology to science, and the scientific cost of its loss in the last last two centuries. Eddie Robinson continues, currently, to battle away to good effect on that thread.

Today I want to pursue my teleological theme into the undercurrent of that thread, which is the question of the real role of teleology in the kind of theistic evolution that BioLogos espouses, relating it less to the science itself than to the overtly Christian position of that organisation. This last it sometimes presents as a “product feature” against ID – the latter keeps quiet and mealy-mouthed about the nature of God, whereas they’re upfront with it. Well, the BL comments speaks to that “concern” (largely through Eddie and GD, though paradoxically the main supporter of BioLogos against him is an atheist: what’s that about?). But here I’ll just quote what I heard an astute preacher say once (not on the subject of evolution, though he happens to be a Young Earth Creationist): “What matters is not that you believe in God, but what kind of God you believe in.”

To illustrate that, let me employ my current reading, which is Egyptologist Keith Kitchen’s definitive 2003 work, On the Reliability of the Old Testament, which apart from the general appeal of its subject appeared with the specific role of confuting the new “minimalism” in biblical history that appeared in the 1990s, using the best archaeological evidence.

One point he makes about the historical accounts in Bible books like Joshua and Judges is that one needs to understand their cultural context of combining accurate reportage with military-political rhetoric and, thirdly, theological interpretation. These are by no means unique, but universal in ANE documents. History is never (as far as is currently known) invented, but is always spun and, in the final public accounts, related to the writer’s or ruler’s theology.

That is really to say it’s a genre requirement as much as, say, the appearance of “objectivity” is in current academic history: now we operate by the strange convention that you are supposed to appear unbiased, whilst being well-known as a Marxist or a Neo-con through your work. Back in those days, to fail to write from your national and theological perspective would have been not to write at all. 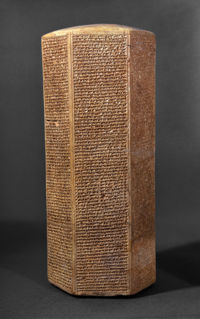 This can be confirmed in accounts by different sides of the same events. Usually the accounts can be easily reconciled factually, once one allows for certain prevalent customs, such as not mentioning your defeats in a list of battles, or presenting them in a rosy light. Thus Hezekiah’s account of the Assyrian Sennecharib’s rudely-broken seige of Jerusalem is, in Sennacherib’s prism, “As for Hezekiah, I shut him up like a caged bird in his royal city of Jerusalem.”

Similarly, the (much earlier) national tragedy of the destruction of the Israelite shrine at Shiloh is not even mentioned in the account of the Philistine defeat of Saul and the capture of the ark of the covenant, being only hinted at in works of centuries later. In every nation, enemies are “utterly destroyed, never to rise”, even if they rebel again just a few years later. (This incidentally, makes nonsense of all that hand-wringing over the “Canaanite genocide”, which properly understood is never even portrayed in those terms, let alone reflecting a bloody reality).

Once again, Israel is not unique in attributing its historical events to the hand of God: any Pharaoh’s battle record will attribute a victory to the royal deity Amun, or report that Amun directed him to punish that particular enemy. We have here a worldview matter – divine attribution of events was universal. It’s not that Israel believed in God and the others didn’t – it’s that Israel believed that Yahweh alone existed, and embraced them in a unique covenant. Pharaoh or Tiglath-Pileser were attributing to their gods what were actually the judgements of Yahweh. 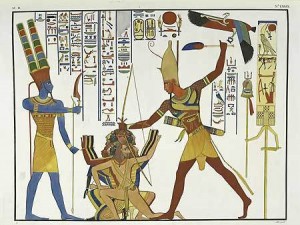 Another interesting and relevant thing, though, is that in all cases these theological glosses were recognised to be theological interpretations or reflections on the facts. Thus in several ANE cultures, running annals of events have been found, including the bare facts of campaigns, victories and even defeats. These form the basis of the victory stelae, once spun for national and dynastic purposes. And they also form the basis for the theological interpretations on such stelae. This too is parallel to the biblical accounts, whose real historical sources (as opposed to the critical scholars’ hypothetical sources and appeals to fictionalising) are often referenced. And so the books of Kings or Chronicles, with their specific theological programmes and, therefore, their special stylistic features, refer us back to the annals of the kings of Judah for further details on any particular king.

Notice incidentally that this referral to primary sources differentiates them from propaganda: we didn’t find the Independent referring us to the primary literature on the matter of sexuality!

Kitchen gives some specific (and often well-worn) examples of miraculous events in Joshua and Judges, which have been shown to match natural possibilities. For the crossing of the dried-up Jordan by Israel at Gilgal he references several historical repetitions of the event owing to landslips several miles upstream. When rebels sink into the ground in the wilderness, he points to similar events in that locality owing to the breaking of dirt crusts over mud in wet weather. Even in the case of a frequently cited “impossible” miracle – the standing still of the sun for Joshua – he refers us to an article by John H Walton (summarised by Walton here) which argues for its being a miraculous divine omen rather than a miraculous divine suspension of Newton’s laws, on the basis of its consistency with other ANE literature.

Now the point about all this is that the Israelites were not, any more than their pagan neighbours, superstitiously seeing mysterious forces behind every bush, denying what we would call “natural” causes in favour of the kind of divine “manipulation” or “tinkering” that is wrongly attributed to ID in particular and to natural theology in general. They were consciously doing theology, one should add “in the power of the Holy Spirit”: King X was warned by the prophet not to go into battle, and he died: what did God mean by this? We won this battle, and as God is behind all things, we praise his name as we ought. And so on.

The whole world was “theistic”, in the more-than-ID sense of assuming their gods to take an active role in the world. The Israelites were more like BioLogos, perhaps, in not being generic “theists” but having a rational commitment to the One True God, viewing events through that lens rather than any other. If the Philistines beat them, they didn’t ask if Dagon was stronger that Yahweh, but instead what Yahweh meant by abandoning his covenant people. They had a specifically Yahwist worldview, and to be a Yahwist meant, as being a Christian now means, a commitment to theism – that God is behind all events, not absent like dead idols, which neither speak nor act.

To such a Christian theist, a question like “Is this God’s action through Christ, or it is a natural event?” ought to be meaningless, because theism isn’t about dividing the world up into “God’s realm and “natural realm”; that would be a kind of di-theistic dualism. So the first Christian answer to the question, “Why did the Jordan dry up for Joshua?” ought to be, “God made it so.” If one then asks, “How did he do it”, the answer is “landslip upstream above Adam, don’tcha know?” Which is actually attested in Joshua anyway. Chasing the “how” sequence further back might include things like “heavy rain for several days before” or “Grade 4 earth tremor” until you run out of data.

But suppose your inquisitor then exclaims, “So you’re saying a natural event is a divine miracle, then?” You would surely reply, according to sound Christian theistic doctrine,

“No, I’m saying that God planned it and was responsible for it. The word “miracle” mainly has to do with its function as a sign or source of wonder, rather than its cause.” Now, in fact, in this case, what constitutes the basis for any claim that this particular event was a “miracle” in that sense? Surely it’s that nations migrating through the wilderness at God’s direction seldom arrive at the Jordan just as a landslip occurs upstream. There have been (I believe) seven events of this nature since the twelth century AD – Israel would have to wait an awful long time to cross Jordan dryshod, were it not for a miracle of providence.

That brief demonstration of divine teleology in the drying of the Jordan is, in effect, a crude probability calculation. If I demonstrate to your satisfaction that it actually occurred, and was, as Kitchen suspects and the text suggests, associated with a landslip at a known point upstream, then teleology is a reasonable inference from the low probability – the rest is a faith commitment to the God of the Bible rather than to, say, the fickleness of the gods of Canaan or some self-organisation principle – or the Democritan or Epicurian principle that chance is an adequate explanation.

But such a “mathematical” demonstration of teleology, necessary as apologetics and perfectly valid in that context, ought to be a matter of some indifference to the Christian scientist, and not because of some spurious principle about whether God is less praiseworthy for performing miracles than using natural causes, but because the scientist should already know (from being a Christian) that this was God’s purposeful act, since any recourse to “accident” or “chance” as an alternative is by definition an a-theistic explanation.

Now, the creation of what we see about us, whether evolutionary or otherwise, is subject to exactly the same principles. If you’re a theist, it’s a process all about teleology, or properly, “design”, which is what teleology created by an external agent is, definitionally. If you’re a Christian BioLogian, it’s more specifically a process all about the expression of the Father’s all-wise designing will through Christ, the rational and lovng Word of God, operating by the agency of the Holy Spirit of wisdom.

Concede that, and I’ll accept you’re a theistic evolutionist. I won’t quibble about where and when God acts, any more than I need seismological data from Joshua’s time to know that God dried up the Jordan river, or precise details of Joshua’s logistical and hardware resources to accept God’s hand in the victory at Hazor. Just avoid quibbling about teleology – it’s the defining feature of theism, and therefore indispensible to anything calling itself Christianity.