This is picking up some themes from a post in October.

I always remember a conversation I had with my friend Tim on “A” staircase of Pembroke College, Cambridge, back in 1971. We were discussing some current issue over coffee, and I screwed up one eye sagely and said, “Ah, things would be different…”, expecting him to fill in the gap mentally with “…if it weren’t for the Lefties,” or “…if my parents had loved me” or some other amusing platitude. 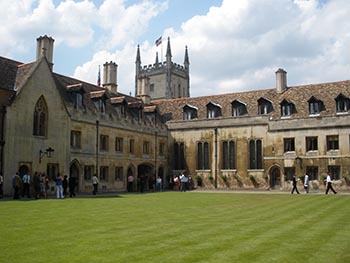 Instead, he replied, “Ah, things would be different – if only they weren’t the same.” It still seems very profound to me. It certainly has relevance to one common argument for libertarian free will, which runs along the line that, if there’s any such thing as free will, then it must at least mean that “I could have chosen differently”.

But I think that holding that premise is, instead, one of the ways that a tricky issue (or maybe it would be simple if we were once truly enlightened) becomes absolutely intractable, leading us potentially to doubt God, our own humanity and more. It’s really another way of saying, “Things would be different, if only they weren’t the same”, which is as much as to wish for another world than the only one that actually exists. Maybe analytic philosophers can do useful work with the concept of “possible worlds”, but the fact is that, certain interpretations of quantum theory aside, we’re stuck with just the one.

So, let’s pretend that in this real world (only it’s a pretend one, of course!) I made some decision of neither trivial nor cataclysmic, but moderate, importance. A friend offered me an investment opportunity, but after deliberation I took a cautious line and declined to get involved. A week later, all my friends became millionaires and I was still struggling to put food on the table.

In the first place, it clearly won’t do for me to go to my friend and plead to get in on the act because “I might have chosen differently.”

Fortunately for me, I have a spare “possible world” – in fact, any number of them – and we can re-run the event again to see if I can wangle at least a possible fortune. This one is exactly the same world, with the same friend, the same me, the same offer. So what is there about it that will enable me to choose differently? I make the same deliberations on the same evidence, consider the same pros and cons, possess the same inherent mix of caution and courage. As far as I can see, I’ll make the same decision. And I’ll make it as many times as exactly the same antecedents apply.

Ah, but supposing I’d had a bit less coffee that day, or my friend was a little less abrasive, or I was just a better entrepreneur? Maybe then I’d have decided to invest and would have become rich. Well, yes. But then it wouldn’t be the same decision, because it would be a different world, wouldn’t it? A world, in fact, that never existed except in my imagination. I don’t see what good the freedom to make decisions in an imaginary world does me in this one.

Some people, though, major on the axiomatic indeterminacy of the will – it is an “autonomous uncaused cause”. It is utterly “free” – and must be, if I am not to be judged on the contingencies of living in the world. If the will is not determined by anything, then all my deliberations ultimately wouldn’t affect my choice. Like a coin spinning on a table, the final decision might have come to rest the other way up, and the millions be headed my way.

In that case, though, one might as well have made the decision by spinning a coin, and it would have been a decision to spin a coin (in a different world!), not an act of deliberation on an investment. If all free will consists of is the ability to make important choices by mere chance, I’m not sure why anybody would want to defend it. The big issues about things like whether I go to hell because of choices I made, rather than because of some absolute divine decree, would then get resolved by saying I go to hell on the toss of a coin. It’s marginally better to be damned by God, I fancy – at least one might argue the toss with him.

No, the possible worlds scenario is a red-herring. To choose is, definitionally, to close off possibilities. The privilege we have, as humans, is the unique one of being able to close off important possibilities using reason and moral judgement, and have those decisions ratified by reality. We don’t promote free will by opening up all the other possibilities again in imaginary worlds.

Information, too, is definitionally the closing off of possibilities – so making a choice is really another way of saying that we add a bit of new information to the universe. To will is simply to inform the world. In that view, the “will” part is as much the result of what we are as is what we say: “out of the fullness of the heart the mind wills”. We are the same person in all “possible worlds”. To say “I might have chosen differently” is to say, “I might have been a different person.” Well, OK, I grant that the Queen of Sheba might have invested in my friend’s scheme, but how does that make me rich?

Again, in this view the “freedom” part of “free will” only need be subjective, rather than ontological. It only matters that I deliberate according to my character and the facts and feelings I actually have before me, and not on these being unknown to God, or anyone else for that matter. If I’m so predictable that my friend knew of a certainty I’d never part with my money, the world was still changed by my inputting the actual information to that effect, and I was still free when I did so.

Here’s another partial analogy. If I run some extremely time consuming computer algorithm on a set of data I have collected, I am entitled to be surprised, delighted or dismayed by the results, even though nothing ever comes from a computer but information that was already inherently present in the data and the program. “4” exists in “2+2” before the child ever sits down with a pencil. But the child is praised, the parents glow, the teacher smiles… the world is changed by information that was inherent within it all the time. The computer “knows” it all from the start, but my world is still changed when I discover it too. In the same way, God’s knowledge of my future decisions has absolutely no effect on my freedom, if I avoid nebulosities like “possible worlds” and “autonomous uncaused causes”.

Suppose, though, my choice is one that is crudely coerced by torture, or madness and so on? Well, it does happen to be a fact in this (real) world that even such decisons under duress have consequences. “They would have lived had I not broken under torture” doesn’t really mean much, except when the possibility of resisting is still open and the though strengthens me. I don’t think that’s deniable, except by those preferring to construct imaginary worlds. Are such decisions “free”? Why bother even to ask the question? In the real world, the brainwashed or tortured person who retracts his confession is judged by others, according to circumstances, on his courage, remorse, and so on.

Fortunately, as to eternal issues nothing in Christian theology says that we are finally judged on a single decision, but on the course we set on our entire lives. Nothing in the Bible even teaches the thing called “free will” by philosophers (and armchair philosophers), so it’s rather academic. But one would presumably be glad if, by some act of divine healing, the mind damaged by torture into limpid compliance were healed from the oppressor’s cruelty by a kindly external agent, and that led to his change of mind.

If, in a comparable case, the coercion involved in damaging choices were that of my own original sin compounded by evil choices, a similar act of God’s grace, which healed ny soul and enabled me to see his love for me, though it were undeserved could scarcely be called “coercion” if I then chose to follow him and live. In fact, it would sound like freedom to me.

And unlike the “might haves” of imaginary worlds, such renewal of people happens in this real one.