How hard can prevention be?

One of the more glorious moments of my not especially glorious medical career was that I was, quite accidentally, instrumental in catalyzing a medical conference on prostate cancer screening in our town. Here’s how it happened.

I saw an article in our local paper extolling the virtues of private prostate cancer screening: “One simple test can save a dreadful death” and so on. The article was initiated by our local urology consultant. It only really gained my attention, being an NHS rather than a private GP, because just a few weeks beforehand the local hospitals had sent out a circular telling us not to refer patients to the urologists for prostate screening under the NHS because it was of no preventative value. The catch was that the consultant recommending the private service was also an NHS urologist.

So I wrote to him, suggesting that if screening was worthwhile for paying patients, it was for my NHS patients too, but if it wasn’t of value to the latter (as per the guidance we’d been sent) then he ought not to be recommending it to the worried wealthy (a good number of whom were also my NHS registered patients).

Now, to be fair, it became clear that his praxis was not so much intended to make a fast buck, but because he actually disagreed with the local policy, and on the kind of grounds you’d expect from a simple surgeon with the venerable professional motto, “In Dubio Exsece” (If in doubt, cut it out). Prostate cancer kills 11,000 UK citizens a year. PSA blood tests are easy, prostate biopsies stock-in-trade, and early radical treatment by surgery or radiotherapy can more or guarantee eradication of early disease (actually it can’t, but that wasn’t known then).

Meanwhile, though, I’d been looking at the NHS screening authority website, and had fired off some e-mails questioning their far less enthusiastic embracing of screening. It was only after about the third reply to my rather belligerent enquiries that I realised the person replying was Professor Sir Muir Gray, then head of the UK NHS screening service. He taught me a thing or two about the epidemiology of prostate cancer, and of screening in general.

Now unless you’re Sy Garte (whose portfolio includes epidemiology), it’s likely that the situation regarding screening seems as simple to you as it did to my urology colleague. “Seek, and strike!” But it’s an actually extremely complex issue, and there are in reality very few real situations in which screening is unequivocally a good thing. You need a disease whose outcomes are predictably bad, whose treatment is safe and effective, and whose early detection is also safe and virtually infallible. Things fall apart very quickly if any one of those falls short.

In prostate cancer as it was at the turn of the millennium, none of those were true. PSA blood tests are notoriously guilty of false positives and negatives. Prostate cancer is near-universal in elderly men and compatible with long life, and is only unpredictably aggressive. The radical treatment itself has radical side effects like permanent incontinence and inevitable impotence – and a significant mortality.

The net result is that screening may give false security; or raise awareness and anxiety years early about a disease that would have never caused problems, or which will kill you anyway; or treat what would have been a benign condition with treatment that maims or kills you.

And so it all led to an interesting evening discussion, and given the uncertain state of the science, a change of local policy to “discuss the issues with NHS patients seeking screening and refer them if you and they agree.” That, in fact, was miserable advice as far as I was concerned, as it is not possible to teach lay people, who suspect you’re trying to save money anyway, epidemiology in a 15 minute NHS consultation. One cancer screening request, and you’re running an hour late (probably with a bad temper because he wouldn’t be educated).

Now fifteen years later, despite data from some long-expected large trials, prostate screening is still controversial. And last week came this article, which doubts the validity of any existing cancer screening. This suggests that the epidemiological problems are still as intractable as ever, and not only about prostate screening. Mammography screening for breast cancer was finally introduced here in 1988, but I remember observing a conference at Westminster Hospital way back in 1976, in which the greatest experts in breast cancer tossed the pros and cons back and forth and, in general, considered it was not likely to be a great help. Spokespersons in the Indy article say it’s saved many lives, the research articles says it’s not that simple.

Now, as the Indy itself indicates, this one paper has many detractors, and may well be wrong in its conclusions about particular, or even all, existing screening porogrammes. Or it may be right. The point to me is that, many decades after such programmes were instituted across the world – involving probably billions of patients and huge budgets both for operation and research – it’s still possible for leading scientists to argue from the data that it’s been a waste of resources and may even have caused harm overall. And for others, equally eminent, to argue the opposite.

That, I found over a career in medicine, is the general truth about medical research: human beings and their ailments, in their natural setting – which is where we have to do medicine – are just so complicated that the scientific goal of reducing the issues to simple, “evidence-based” outcomes is doomed to result in diametric reversal of “best practice” every few years. Witness other big news stories like the dietary causes of cardiovascular disease, the safe limits for this and that social drug, and so on.

This is the case even in statistical fields like epidemiology (where it’s legitimate to institute policies that benefit the greatest number despite widespread exceptions). It’s much more so when one is dealing with individual human beings, every one of whom steadfastly refuses to behave as an average particle in some medical Newtonian Universe.

Now I’d be the first to say that evidence-based management is far better than voodoo-based management or guesswork. My point is rather one I’ve made a few times recently, which is that the kind of science done in medical trials is just one way, amongst others including the nous of long professional experience, of approaching useful truths. It is not the universal panacea for ignorance that too many influential people in my profession, and in government, believe for ideological reasons (scientism being, ultimately, the ideology).

Thomas Kuhn said more or less the same thing of science in general, and I guess he mostly had in mind fundamental sciences like physics and chemistry. How much more true it is for situations outside the tightly controlled simplicity of a laboratory.

So should you middle-aged men go for your prostate screening? Sure thing – once you’ve signed up for the course on epidemiology. 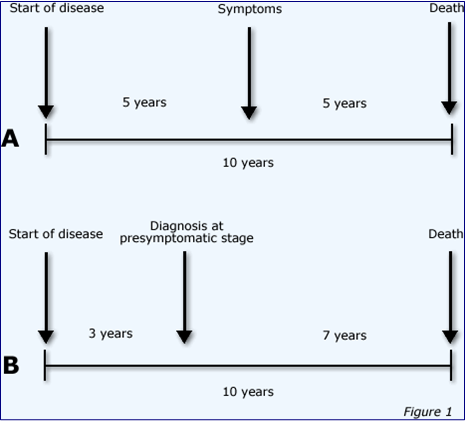 Hazards of screening #1: Lead time bias. You discover something earlier, but make no difference (except in raining anxiety and giving more treatment) 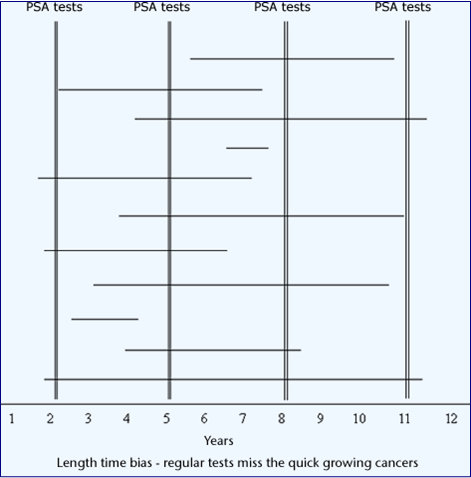 10 Responses to How hard can prevention be?