When creation is not good enough

I found myself astonished by the sheer scale, and immediacy, of media outpouring over the death on Monday of David Bowie. I don’t know what it was like elsewhere in the world, but from the first “We heard half an hour ago…” on the non pop-culture BBC Radio 4, pretty well the whole radio output of the day seemed to be replaced by every available media person’s appreciations, however trivial. Here was the BBC news: “I’m sorry to have to cut short your thoughts on tomorrow’s national doctors’ strike, but you’ll appreciate that in the light of David Bowie’s death this specially extended programme…”

I wonder if I was alone in thinking this a strangely skewed set of priorities? It’s not so much that I was never a fan: I admit I thought Space Oddity was a bit trite when it came out, and never really caught the Bowie bug afterwards. But I wasn’t a Motorhead fan either, yet I still appreciated the reasons for the coverage of Lemmie’s recent and more sudden death, and felt sorry for it even as I did for Bowie’s. I even recognise that Bowie was a much more significant artist than Lemmie.

What struck me, though, was that clearly those media people working at the Beeb were so affected personally that, without any accumulating realisation of public emotion (as occurred with the more untimely and violent death of Princess Diana, for example), it was simply considered axiomatic that normal service would be suspended forthwith. There wasn’t such blanket coverage even when the Gulf War broke out.

Nothing quite like that happened after the tragic and violent death of, surely, at least as charismatic and famous an artist, John Lennon, when he was shot at the age of just 40, rather than dying at 69 from natural causes. Yet both had just produced long-awaited and much-acclaimed come-back albums. I’ve yet to sound out how people generally felt – my impression as a working rock musician (occasionally) is that in the past fewer people have told me that Bowie’s music was the indispensible soundtrack to their lives than they have regarding other artists such as the Rolling Stones, or even Michael Jackson.

But don’t you find there’s usually something more sociological than personal going on when a whole nation appears to go into meltdown at once?

There seemed to be agreement that he was a nice, polite chap in person, and that in latter years he became a staunch family man. But that’s scarcely unique. I began to feel that such a strong reaction could only have been triggered because Bowie was believed to encapsulate the Spirit of the Age, at least for all those involved in the media. It seemed to be another instance of the power of the narratives people live by – as at the passing of Winston Churchill or John F Kennedy. So I wondered what that Spirit might be.

And as the day wore on the tributes and headlines seemed to form a pattern. “He kept reinventing himself”. “He never looked back.” “He showed it was OK not to know who you are.” “He even made his death part of his art.” Even the quotes from the man himself tended to be on the same theme:

I suspect it’s likely that, in his maturity, he may well have become more content with himself, as this quote from a few years ago suggests:

You know, what I do is not terribly intellectual. I’m a pop star, for Christ’s sake. As a person, I’m fairly uncomplicated.

But it’s the act, rather than the person, that makes the public myth, and the act (and for a long time, it seems, the life) was one of avoiding, or not even knowing, ones real self, and the obsessive desire to reinvent a fiction better than reality. It was, in fact, the driven pursuit of the inauthentic. And that seemed to be what resonated with the zeitgeist of the radio-waves until they shook apocalyptically. This seems also to be the message of some serious commentators. Simon Critchley, in the New Republic yesterday, wrote:

Art’s filthy lesson is inauthenticity all the way down, a series of repetitions and reenactments: fakes that strip away the illusion of reality in which we live and confront us with the reality of illusion. Bowie’s world is like a dystopian version of The Truman Show, the sick place of the world that is forcefully expressed in the ruined, violent cityscapes of “Aladdin Sane” and “Diamond Dogs” and, more subtly, in the desolate soundscapes of “Warszawa” and “Neuköln.”

That this is not merely a reaction in the face of his departure is shown in these comments from 1999, by Philip Auslander, in an article entitled David Bowie’s Authentic Inauthenticity:

It is significant in this context that the performers (Elton John, Alice Cooper, David Bowie) were more concerned to create spectacular stage personae than images of authenticity. This is particularly true for Bowie, whose systematic and self-conscious metamorphoses of persona (including his sexuality) and musical style represent a significant departure from the ideology of authenticity … Bowie’s distinctiveness lies not only in the frequency and extremity of his transformations but more importantly in his assertion of the conventionality and artificiality of all of his performance personae.

Auslander quotes Lawrence Grossberg, again writing in the context of rock music in 1993, to relate his understanding to Postmodernism:

…the only possible claim to authenticity is derived from the knowledge and admission of your inauthenticity.

It seems to me these thoughts are relevant here because such a way of seeing the world is, I judge, very much of the time, but also diametrically opposed to the Christian doctrine of Creation. Maybe that’s why I never liked David Bowie’s music much. For Creation is about a good God who has created a world that is both good and – importantly – authentic. Its doctrine of man is that, though we are out of kilter with that reality because of sin, true authenticity is always on offer through repentance and a new relationship to God.

If instead, we cynically despise the world that exists and try to remake ourselves, and the world, according to a pattern of our own invention, then we are operating from a similar worldview to the Baconian science that would torture the world into suiting our wishes (ending up pretty quickly with an imploding Anthropocene Era), or would even seek to remake our bodies through transhumanism, or just gender reassignment surgery.

The book of Ecclesiastes is just as realistic as any of our postmodern artists in recognising the ambiguity of human endeavour. But its understanding of the cause is different, for in effect it is a commentary on the Fall in Genesis, just as Romans 8 picks up the same word “vanity” for describing the way of the world. It is man who has made himself futile (Ecclesiastes is notable in not attributing “vanity” to the natural realm), and not chance or, as people love to protest nowadays, a vindictive (though of course non-existent) God. Once you come to embrace inauthenticity as a worldview, you wouldn’t even want God to be real and good.

Likewise the solution offered in Ecclesiastes is different, too: since human life turns out to be folly, it says, don’t persist in perpetuating the folly (even through the archness of postmodern irony). Instead, turn from vanity to the authenticity to be found in God. In Christian terms that’s nothing more than to turn to the utterly foolish, but wonderfully real, work of the Cross. It not only offers an imperishable authenticity in the age to come, but transforms our view of life in this world. Being our true self, rather than a persona, turns out not to separate us either from the world or from others, but gives the ordinary a transcendent meaning. As George Herbert said of living for Christ:

This is the famous stone
That turneth all to gold
For that which God doth touch and own
Cannot for less be told.

Why would I want to move on from reality when I don’t think it’s an illusion that I’m forced to live in – and when in fact it is rather beautiful and holy? 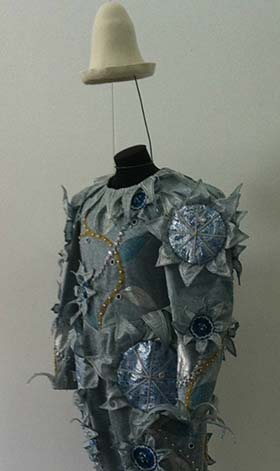 Training in medicine (which was my career), social psychology and theology. Interests in most things, but especially the science-faith interface. The rest of my time, though, is spent writing, playing and recording music.
View all posts by Jon Garvey →
This entry was posted in Music, Politics and sociology, Theology, Uncategorized. Bookmark the permalink.

2 Responses to When creation is not good enough