The last two blogs, on Genesis cosmology, were partly written in interaction with a discussion on BioLogos on that subject, to which I contributed just a couple of posts. One thing Eddie questioned in my presentation there was the perception that I might be elevating “the heavens” as a special, more holy part of creation.

That is a question of fine nuance – the heavens are presented throughout Scripture as the dwelling of God: Do not be quick with your mouth, do not be hasty in your heart to utter anything before God. God is in heaven and you are on earth, so let your words be few. (Eccles 5.2). I’d also be one of those who believe Genesis 1 is a temple inauguration account, in which the heavens represent the most holy place, the firmament the sanctuary and earth the temple-court. And yet, as Solomon said at the dedication of the Jerusalem Temple:

“The heavens, even the highest heaven, cannot contain you. How much less this temple I have built!” (1 Kings 8.27).

Eddie’s point was that Genesis makes a radical departure from the surrounding religious cultures, in which some parts of the world are divine (like the heavens made from Tiamat’s body in Enuma elish, or Nut the sky goddess in Egyptian mythology). In contrast, all creation in Genesis is only God’s handiwork, wonderful though it is, and has been recognised from the days of ancient Israel to the rise of modern science to be intended to point us to God, not to be revered in itself. As Eddie puts it in his post:

I think that all subsequent reference in the Pentateuch to God’s relationship with the heaven(s) are meant to be read in connection with what is established in Genesis 1. That is, even where God is pictured as being “in the heavens,” we have to be careful not to divinize the physical heavens or regard them as somehow more worthy of respect in themselves than the other parts of creation.

The only thing I’d question there is God’s dissociation from thunderbolts. Not only a few chapters later in the Flood, but in almost every passage relating to the natural Creation, God’s expressive use of the weather is affirmed. Look for example at the theophany of Job 38ff (which is actually spoken by God “out of the storm”):

‘Can you raise your voice to the clouds
and cover yourself with a flood of water?
Do you send the lightning bolts on their way?
Do they report to you, “Here we are”?’

But these are statements of God’s mastery over nature, which is his servant, not of nature’s own divinity, which was Eddie’s point. The thunderbolts are not gods, nor even supernatural – even if they are occasionally tossed about by God. Underlying this carefully nuanced process of de-divinization in the Bible is the radical distinction between God and what he has made, leading as the Bible progresses to the key concept of creation ex nihilo. You can actually see that in embryo when you contrast Genesis with the ANE myths.

All those that deal with the very beginning of things involve some kind of theogony: something must have started everything, even the gods. In earlier Mesopotamian religion (contrary to what many “Bible is ancient science” guys would have you believe) the earth was the beginning of everything. Later, and in Egyptian mythology, a primal ocean takes that role, and in the relatively late Enuma elish what is now believed to be an amalgamation of mythologies leads to a primal duality of Apsu (fresh water) and Tiamat (bitter water). Divinities are belched, vomited, procreated or otherwise generated spontaneously from this inchoate origin, and represent, or actually become, the elements of nature.

But in Genesis, God – just as he was, is, and evermore shall be – was brooding over all things from the beginning. He organises everything, but nothing organises him. And without him nothing is organised – it doesn’t organise itself like the primal matter of ANE myth and evolutionary theology.

The corollary of this is that God is, properly speaking, “outside” his creation. The Deists and their naturalistic heirs wrongly take this to mean “outside the universe” in a distant, clockmaking sense. But however we understand it (which, I suggest, is inevitably hardly at all), we Christians would tend to say nowadays that God doesn’t “really” live in the astronomical heavens. Instead we hive off the concept of God’s heaven to something like a “spiritual dimension”, even though there isn’t one of us with any idea what that actually means. But we would be unwilling to say that God could, or would, actually localise himself to any region of creation, be it the heavens or anywhere else.

In other words we’re not actually at odds with the false quote from Yuri Gagarin, that he didn’t see God when he was in space (actually, it seems the quote originated from Khrushchev’s speech against religion at the Central Committee of the Communist Party: “Gagarin flew into space, but didn’t see any god there.” Gagarin himself, apparently, was a member of the Russian Orthodox Church… what did that man say about science getting you to the moon and religion into buildings?)

Another recent Biologos discussion was about the Ascension of Jesus, and I commented on it here in terms of concepts about perception. But I want to present a rather simpler, and more difficult, thought here. And that is that Jesus Christ is risen, which changes everything.

As N T Wright spends 800 pages exploring in The Resurrection of the Son of God, the unique and characteristic belief of the historic Church of Christ is that Jesus died and was raised in the flesh – the very hope much of Israel had for the righteous in the future, but unexpectedly actualised in advance of the Judgement by a suffering Messiah.

Also unexpected was the the “same but different” form in which Jesus rose – what Wright dubs the “transphysical” for want of a better term. Some things were new – he appeared or disappeared through locked doors, was often not fully recognised and so on. Yet he insisted that he consisted of “flesh and bones”, he could eat (and cook!) and the wounds of his crucifixion were still visible. If we are credal Christians (as I suspect most readers here would wish to be), we believe that “the third day he rose again from the dead” and we also believe in “the resurrection of the body and the life everlasting.”

And that leads to a truth we seldom think through fully – that there is a man in heaven now, however we choose to conceive heaven. Scripture tells us that Jesus – the incarnate Jesus, in the same body that affirmed the goodness of the physical Creation and underwrote its future, the body whose likeness we hope to share in the world to come – now shares the throne of God. That is only right since he is the eternal Son of God who triumphed through his suffering. But he never gave up his incarnate state to share that throne, to dwell in the very presence of the Father, for it is in the form the disciples saw him go that he will promised to return, and then we, who believe and rise to eternal life, shall be like him.

So here’s the conundrum in the light of the original discussion: either it is possible for God to be localised in physical Creation, so that he can be said to be present with the risen body of Jesus, wherever that is now situated (and is it not part of being physical to be somewhere?). Or else it is possible for a human body of flesh and bones to be non-localised in the physical Creation and to dwell in the uncreated realm, whatever that is.

Either way our neat theological distinction between God and his Creation has become blurred by the truth of Jesus in a way that goes beyond even the mystery of the Incarnation itself. I don’t pretend to have any kind of answers about this, and just want to flag it up as a reminder of our ignorance. That ignorance extends even to what the familiar created reality actually is: the very idea of physical localisation appears to be called into question in contemporary science, as this (quite taxing) piece shows.

For me, it means being a bit less sure of the Enlightenment rational certainty that God could not be “up there in heaven”. How can I claim that when it’s far from clear what “up” and “there” actually mean (let alone “heaven”), at the kind of level one needs if one is to make claims about God, whose nature is even less knowable?

Maybe that simple phenomenology of the Genesis account will turn out in the end to be more factually correct than our modern speculative wisdom. 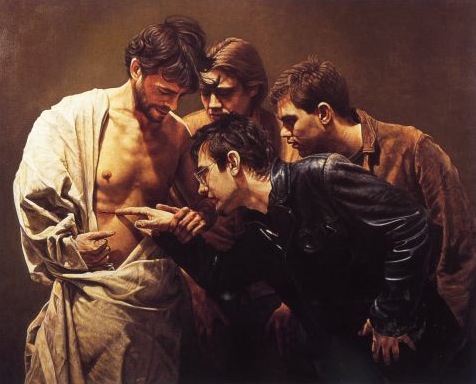